Fans of instrumental guitar music were treated to quite the extravaganza on a Wednesday night as Steve Vai and Generation Axe kicked off their fall tour at the Fox Theater in Oakland. Generation Axe is a supergroup consisting of Vai along with Zakk Wylde (Ozzy Osbourne), Yngwie Malmsteen, Tosin Abasi (Animals as Leaders), and Nuno Bettencourt (Extreme). Each guitarist got ample room during the show to play a mini-set of their material, and the five guitarists also engaged in some mind-blowing collaborations. 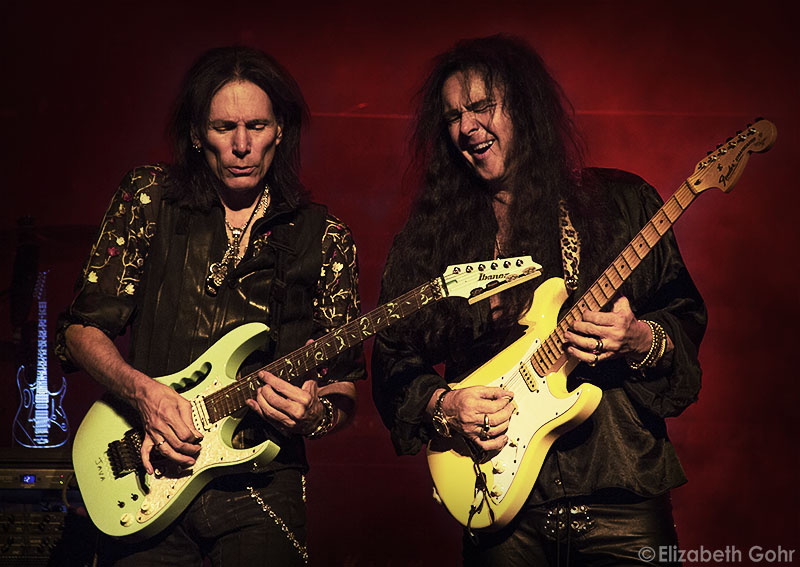 Generation Axe took the stage to rip through a version of the Focus classic “Hocus Pocus,” which provided the perfect template for the five guitarists to trade off solos. In terms of sheer note density, the playing of Bettencourt, Malmsteen, Wylde, Vai, and Abasi is unmatched, with so many crazy runs and wild displays of technical perfection that it was hard for even the most devoted of fans in the audience to keep up with everything. 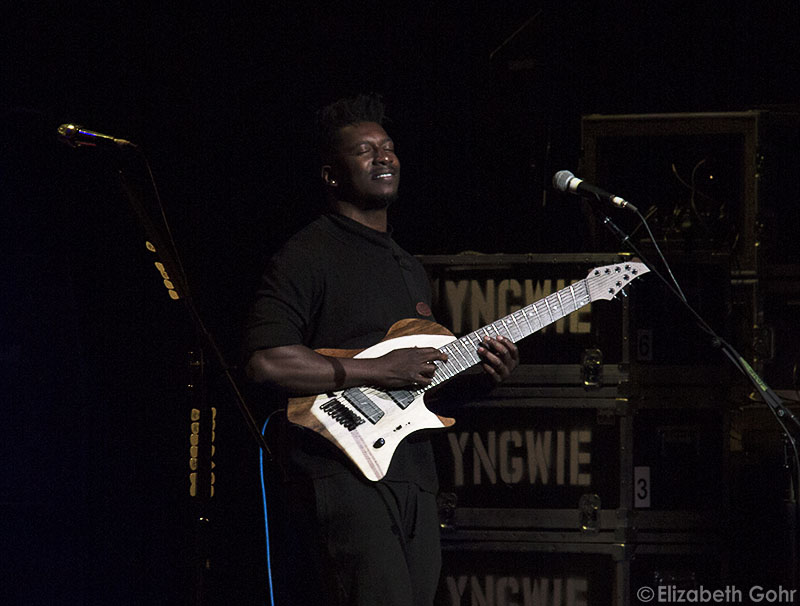 Abasi was up first, rolling through some technically demanding Animals as Leaders material. What makes his music so fascinating are the complex time signatures and unorthodox guitar work in each song. Abasi plays a custom 8-string guitar and uses a percussive slap technique for most of the songs, performing both rhythm and lead and the same time. Bassist Pete Griffin and drummer JP Bouvet had the hardest jobs as the two backed each guitarist and were both playing for pretty much three hours nonstop. However, they made the complex time changes seem like nothing, easily matching Abasi’s wild playing. 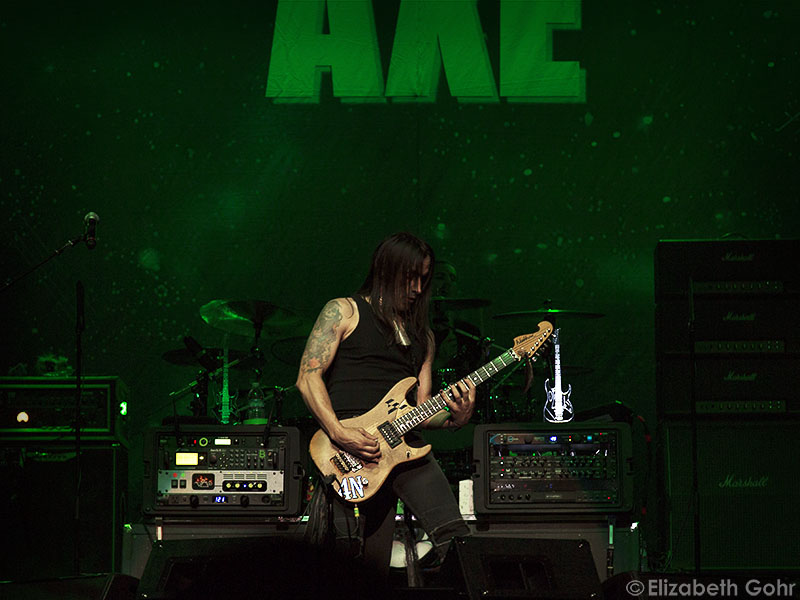 Bettencourt was up next and he brought a more straightforward blend of warp-speed guitar licks to the table. He opened with the Extreme hit “Get the Funk Out” before delving into some purely instrumental tracks. Bettencourt talked about watching a fan video on YouTube of all of his best guitar solos from Extreme’s discography and realizing that was a great idea before ripping into a long medley of the best moments from his work in Extreme. Eventually, Zakk Wylde came on stage to duet with Bettencourt, as the two ripped through an inspired cover of “Sideways,” which featured some decidedly bluesy guitar licks from the two of them. 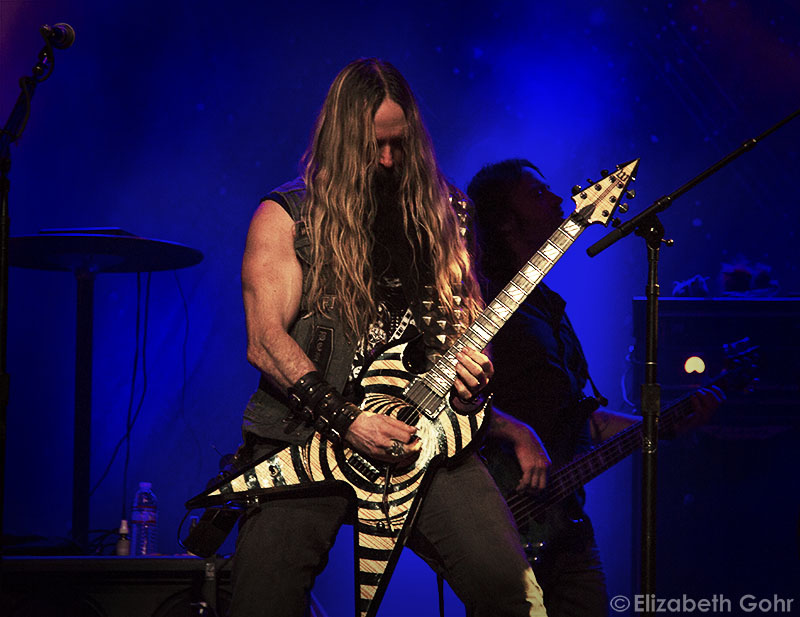 Zakk Wylde changed things up for his set, as he stuck to classic Black Sabbath songs to rock the audience with. Wylde has been touring in recent years with his band performing Black Sabbath covers, and he has nailed the vocal delivery of Ozzy Osbourne, with Wylde’s nasal pitch sounding great. Wylde began with the mammoth “Into the Void,” which saw him walk into the audience all while performing a technically demanding guitar solo.

Wylde did not miss a beat as he walked all the way to the top of the balcony of the Fox Theater, continuing to play his solo without missing a single note. At one point, half of his body was hanging over the balcony as the crowd watched in utter disbelief. After a crushing version of “War Pigs,” Bettencourt returned for another duet in the form of the blues staple “Still Got the Blues.” Once again, Wylde (along with Bettencourt) took to the audience during the solo section, wowing the crowd with another crazed set of solos. 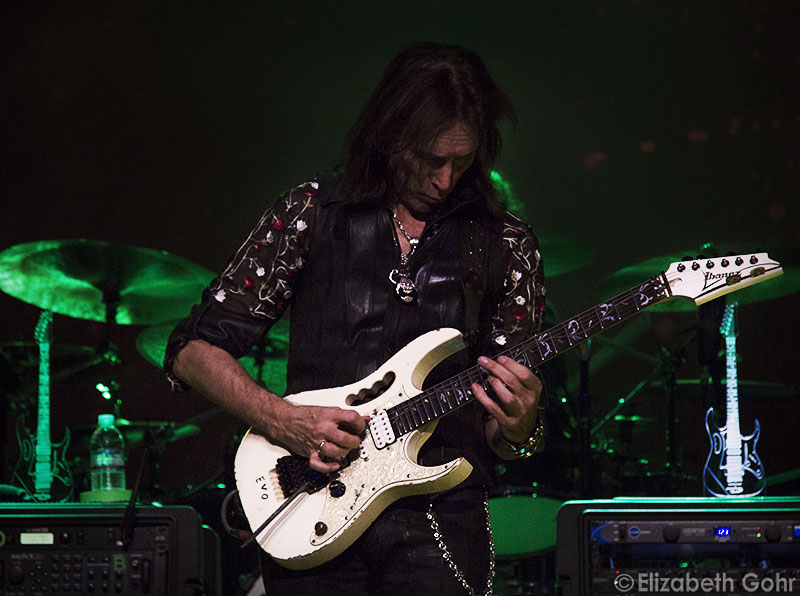 Steve Vai was up next and he brought a more restrained set of songs to the stage. While Vai can certainly play incredibly complex and hyper-speed music, he worked his way through some slightly slower material, such as the breezy “Whispering a Prayer.” He thanked the audience for coming out and supporting this tour, which is now in its second incarnation after a successful run through North America in 2016, before turning things over to Yngwie Malmsteen. 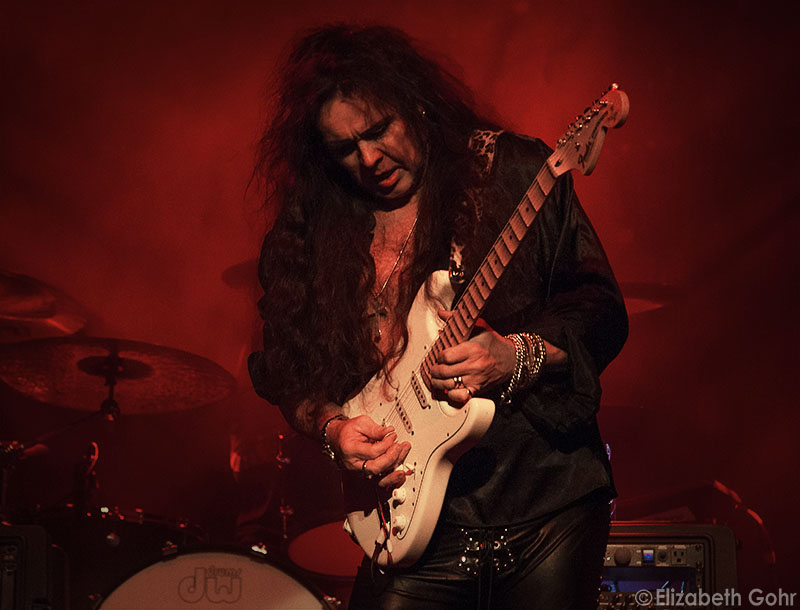 As one of the originators of shred guitar and the entire genre of instrumental guitar music, Malmsteen has one of the most identifiable guitar styles of anyone. He wasted no time in getting to the point as he rolled through a scorching version of “Arpeggios from Hell,” a showcase for his classically influenced lead guitar playing. Malmsteen was also quite the showman, throwing picks into the crowd, playing guitar with his teeth, playing behind his back, and throwing in all sorts of incredible guitar licks that seemed almost impossible to perform. Malmsteen specializes in a super-fast guitar technique known as sweep picking, which allows him to cover the entire fretboard in a matter of seconds. To close out his set, Steve Vai came on stage and joined him for a version of “Black Star,” his most well-known composition. Riding a snapping drum/bass backbeat, the piece featured an overwhelming series of guitar runs, with Vai and Malmsteen engaging in some ridiculous guitar harmonies.

Malmsteen left the stage as Wylde, Bettencourt, and Abasi came back on to rip through a version of the Edgar Winter song “Frankenstein,” with each guitarist once again throwing down some incredible solos and runs. Malmsteen returned as the 5 guitarists shredded through the Deep Purple classic “Burn.” In a surprising move, Malmsteen took over the lead vocals for the song and while he is not known for his singing, he did a fine job of belting out the song’s legendary vocal lines. Of course, it was all about the guitar playing, as Generation Axe rolled through plenty of mind-bending solos during the song, and it was if the group was determined to pack as many musical notes into the song as possible, and they certainly succeeded in that. 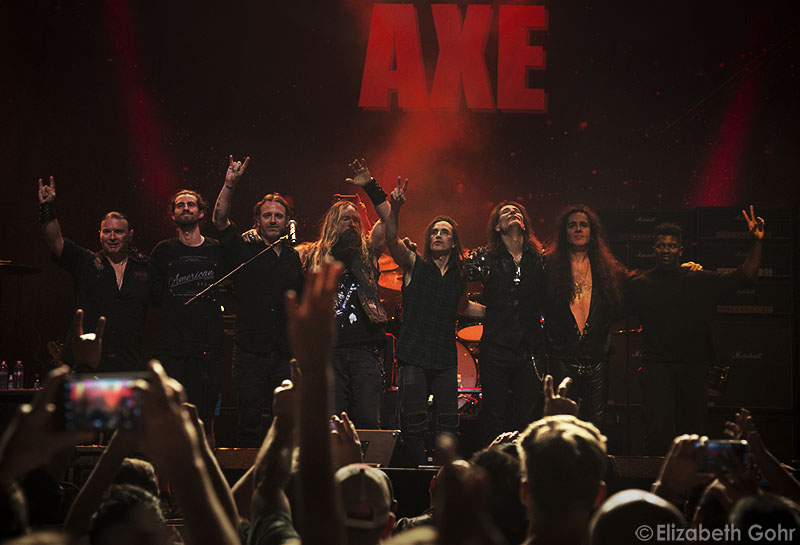 Steve Vai assembled some of the best musicians on the planet for a wild three-hour extravaganza, and fans were not let down one bit. It was easy to get wrapped up in the fun vibes emanating from the stage as everyone up there was having a great time.

Once again, Generation Axe proved to be one exciting and memorable night.