The Decibel Magazine Tour is a yearly celebration of extreme metal acts, bringing American fans a unique European-styled metal tour that always delivers. That was the case on Friday night at the mighty progressive black metal band Enslaved headlined a phenomenal bill, closing out the evening in a truly epic style. 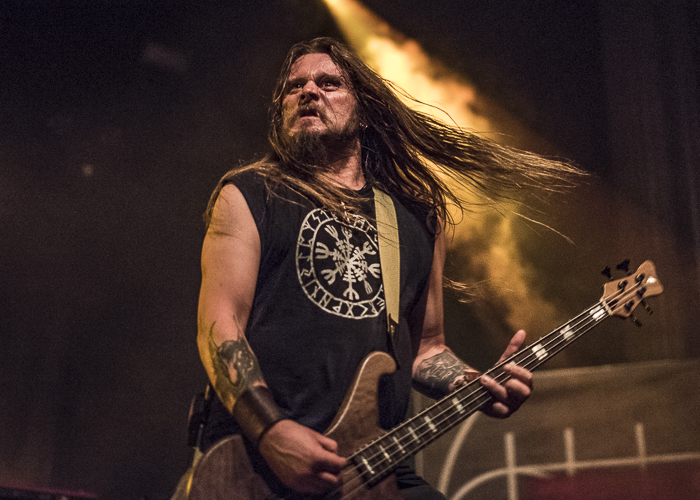 While many misuse the word epic, there is no better word to describe the kind of music Enslaved plays – a combination of caustic black metal and soaring progressive metal that invokes European classical music as much as it does classic European metal. This was the case the moment the band strode onto the stage to play the opening track from their latest release, the acclaimed E, in the form of the sprawling “Storm Son.” Bathed in a wash of red hues the band tore through the 10+ minute song and its many changes in direction and feel, riding on bounding distorted guitar riffs and Grutle Kjellson’s harsh vocal delivery. However, the band threw in plenty of melodic chorus vocals which saw Kjellson and keyboardist Håkon Vinje harmonizing. Enslaved thrives in these opposing extremes: combining the sickening atonality of black metal with the grandeur and melodicism of classic metal. 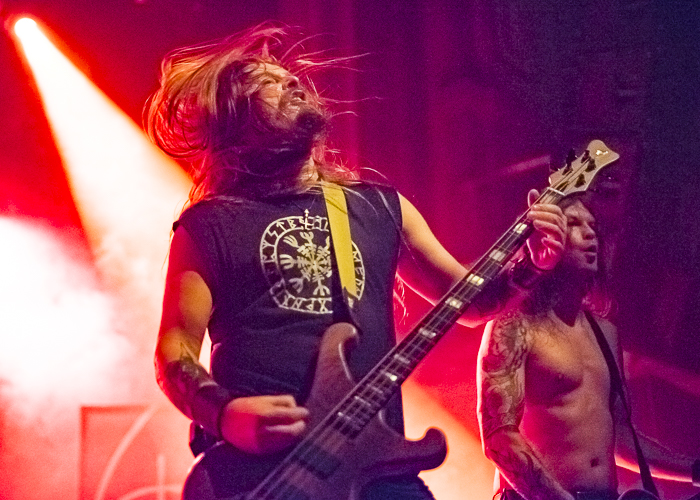 This was particularly the case on the next song, the blistering “Roots of the Mountain.” Beginning with a nasty atonal guitar riff from Ivar Bjørnson, the piece suddenly shifts into an upbeat chorus with plenty of clean vocals before once again shifting back into pummeling black metal. The song also featured a particularly impressive solo break from guitarist Arve “Ice Dale” Isdal. While Enslaved songs tend to exceed ten minutes in length, they never felt that long, as each piece of the composition fit together so seamlessly that it grabbed the audience’s attention and never let go. 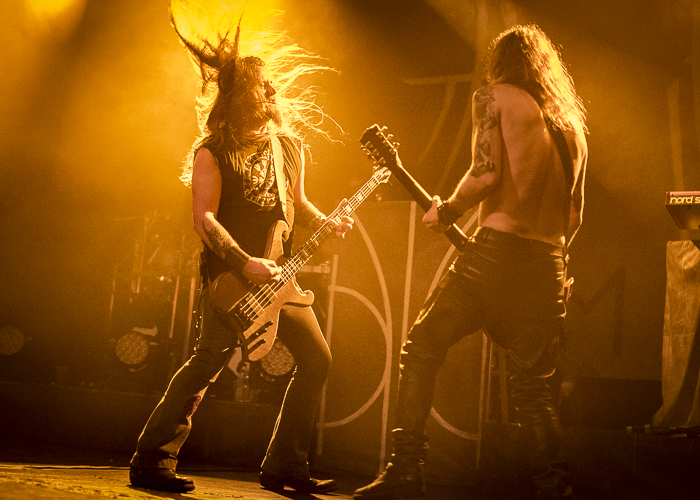 Much to the delight of hardcore fans, Kjellson announced that the next song would be an old one, being played on this tour for the first time in nearly twenty five years. The song “Vetrarnótt,” from Enslaved’s very first album, was a ferocious onslaught of black metal intensity, driven by drummer Cato Bekkevold’s warp-speed beats. The sheer physicality needed to sustain the full-on intensity of the song was truly incredible. Again, Enslaved songs are rarely short, with “Vetrarnótt” stretching beyond eleven minutes in duration. 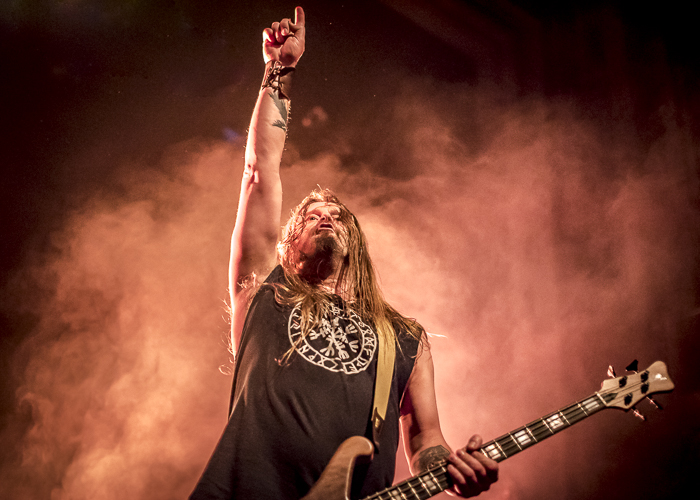 While you may expect a band such as Enslaved to be super serious, it was refreshing to hear Kjellson speak to the crowd with such enthusiasm and positive energy, thanking everyone for attending. The band rolled out two newer songs before closing out the night with the fan-favorite “Isa” from the album of the same name. In comparison to the rest of the set, “Isa” seemed short and straightforward with plenty of dissonant guitar riffs and harsh vocals throughout its four-minute long duration. 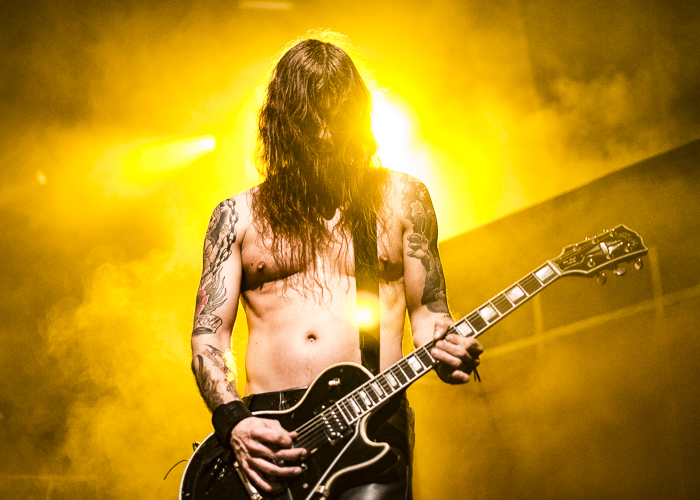 With over twenty five years of experience in the metal scene, Enslaved has developed into one of the best live metal acts around, with their impressive music fitting perfectly in a live setting. Few bands could pull off the complex, multifaceted material in such a convincing way as Enslaved did on Friday night. 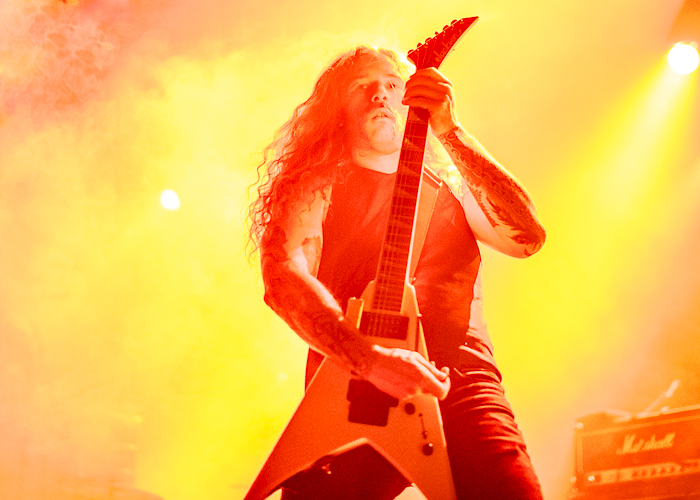 Cloaked in a layer of thick smoke from burning sage, Wolves in the Throne Room ripped through a powerful set that showcased their trademark fusion of rampaging black metal and folk-influenced ambient music. There is a certain mythic quality to the band’s music that was enhanced by the ancient-looking symbols and imagery hanging from the stage along with the lack of light on the band member’s faces and the swirling cloud of smoke. Wolves in the Throne Room are at their best when they mix slow burning and dark soundscapes with the all-out ferocity of black metal, as was the case on the stunning mid-set epic “The Old Ones Are With Us.”

Here’s a slideshow with more photos of Enslaved and Wolves in the Throne Room by Pollen Heath:

Setlist: Storm Son | Roots of the Mountain | Vetrarnótt | One Thousand Years of Rain | Sacred Horse | Is

Wolves in the Throne Room:

Setlist: Born From the Serpent’s Eye | The Old Ones Are With Us | Angrboda | I Will Lay Down My Bones Among the Rocks and Roots

Check out Wolves in the Throne Room here.