No rock band of recent vintage has created a stir quite like Greta Van Fleet (GVF). The mere fact that their claim to the keys of the rock and roll kingdom is under debate is a win of sorts for the band and for the health of rock itself. 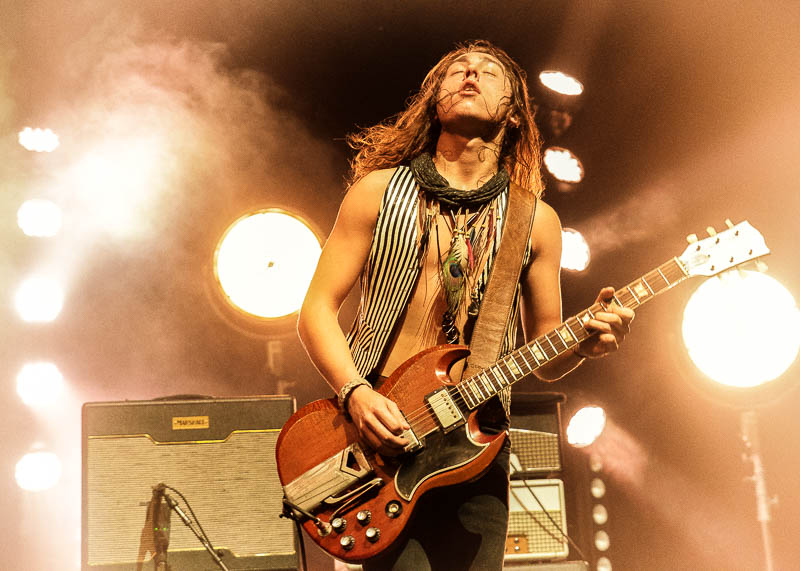 But once you peel back the layers of hot flash and hype that currently surrounds GVF, it is apparent that many a rocker wants to pump the breaks on anointing the foursome from Frankenmuth, Michigan the ‘next big thing’.

It has been a long-standing lament of rock music fans that the new generation is not interested in crafting music made of sweat and toiling, opting instead for the short cut of looping together pre-fabricated sounds on computers to produce beats rather than play music.  GVF –Josh Kiszka (vocals), his twin brothers Jake (guitar) and Sam (bass), and Danny Wagner (drums) – did not take the short cut. They learned their craft by drafting off the masters, and have made themselves a very good band in the process, so much so that they have drawn responses of awe and ire from fans and critics. 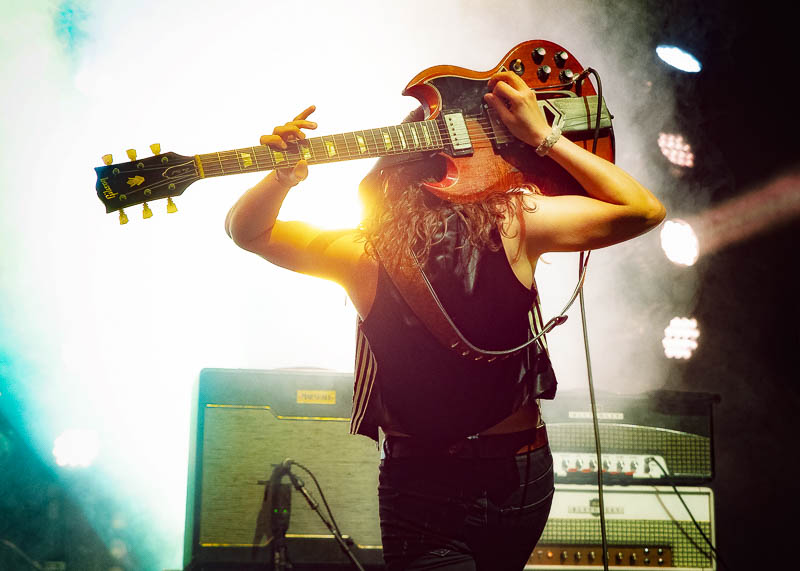 As the band strode onstage at San Jose’s City National Civic, casting roses into the crowd near the front of the stage, the critical eye was tightened to sharp focus. Within their first two songs ‘Highway Tune’ and ‘Edge of Darkness’ it was apparent why GVF are causing so much excitement amongst the rock community, and also why they are being dismissed as ‘wannabes’ in some camps.

The aforementioned awe comes from their very obvious talent. From the powerful stomp of Wagner from behind his kit, the movement inducing bubbling bass lines of Sam, and the rambling bluesy shred of Jake, this band can put their skills up against virtually anyone. 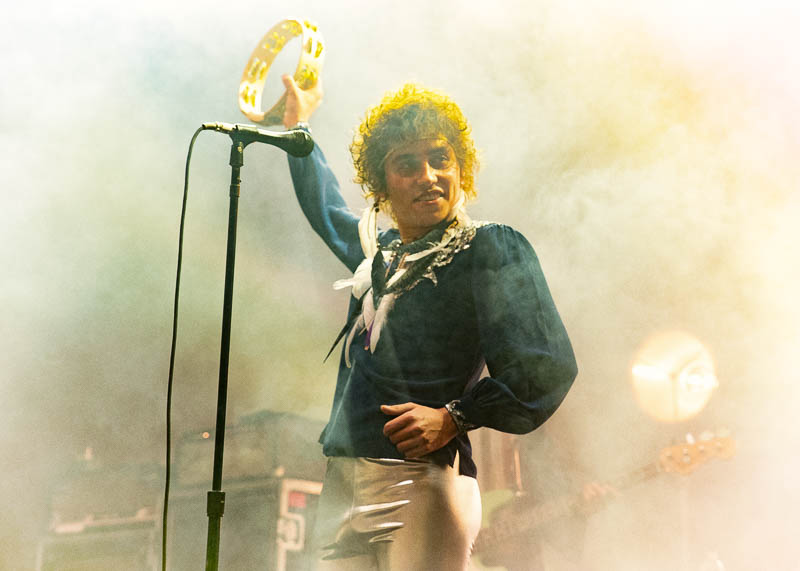 And oh yeah, Josh and his celebrated voice can absolutely bring it too. The comparisons to Robert Plant are legit (there are also traces of Geddy Lee and Jon Anderson), and even Plant himself expressed respect for Kiszka’s skills. It is a powerful, howling voice that looks incongruent to the 19-year-old body that belts it out. It will make you double take in disbelief to assure your brain that what you are hearing lines up to what you see.

The flip side to this enormous talent is that it has come with so much expectation and hype that it can’t be enjoyed for its surface value. It needs to be examined and compared, and when this is done the elements of the ‘wannabe’ contention come to light. 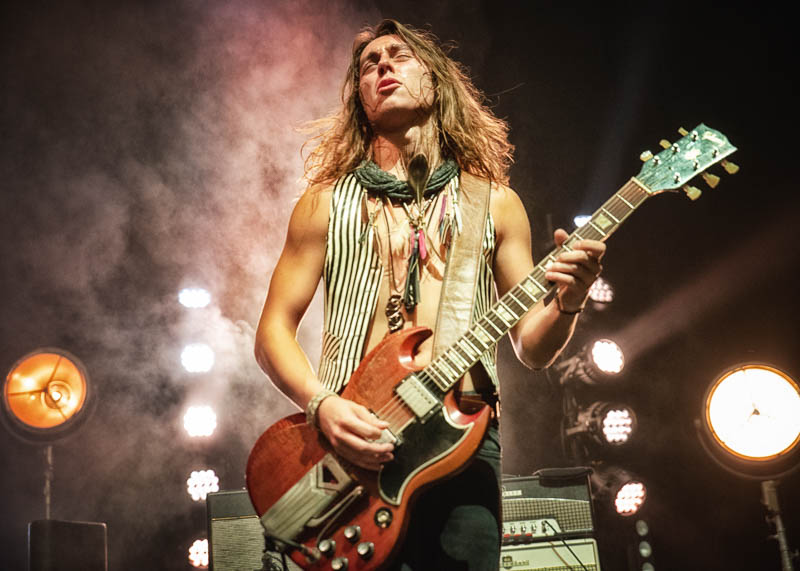 GVF dresses the part of a rock band from 1972…to the point that it looks as if they were dressed by a costume designer, not just rockers wearing whatever they have clean in their wardrobe. This coupled with Josh’s mischievous gestures and hand claps (ala Plant), is where detractors can say that it seems like they are trying too hard to invoke Zeppelin.

And it doesn’t end with the look. The GVF sound is not only pulled from the same blues drenched sonic well of Led Zeppelin, it is practically sipped from the same goblet. The tones of their instruments are almost identical (especially on record). I think this is as much a reason why there is so much skepticism of GVF as Josh being a Plant sound-alike. 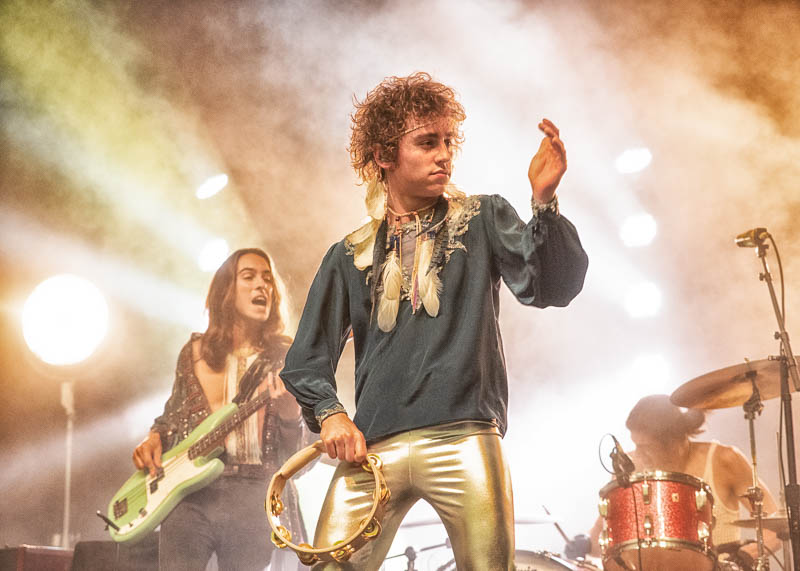 None of that mattered to the legions of fans thirsty for some new classic rock. As GVF weaved through a tight 75 minute set, the crowd stayed with every turn of a guitar solo or utterance of “hey mama”. The set hit a peak right out of the gate and then plateaued as if the hype would drive the set. The band and the songs were ‘epic’ but not epic enough to propel the hype further.

This is where GVF will definitely mature as they get deeper into their career….they will learn to control the energy of the room and not just rely on the crowd. ‘Flower Power’ with Sam sitting down and playing a Hammond was the closest that GVF came to breaking out, taking over the audience and just flooring the place, but again, the song is so rooted in Zeppelin that it is hard to get past.

No matter what GVF say (and they claim they are not trying to be like Zep), the similarities are many and are very apparent. Thus, they are inviting comparisons. It’s just like a new basketball phenom being compared to Michael Jordan…no matter how good one might be they will always pale in comparison to the original.

Will they ascend to the heights of rock royalty, or will GVF go the way of Zebra, a quality band that also drew comparisons to Zep in the 80s but ultimately got pigeonholed as being a sound-alike?   Eventually, they will develop into Greta Van Fleet and not just be referenced as this generation’s Led Zeppelin, and as music fans we need to remember that.

Think about it, there are currently no bands back-filling for Zep or Floyd or the Stones. So we complain that rock is dead. But when someone (GVF) comes along and is a shining example that all hope is not lost with the new generation, we complain. We need to give them a chance to be themselves. After all, these kids are not millennials…they are Generation Z…they are after the millennial generation. Someone needs to carry the torch into the future, and if that someone is Greta Van Fleet I think rock will be OK.

Opening for GVF was Dorothy, a rather cool band from L.A. that also resides in the retro blues-rock domain. However, they have the luxury of not being held to the same standard of GVF because they don’t have the expectations and hype attached.

Led by singer Dorothy Martin, who has a very powerful voice in her own right, they were well received by the early crowd pining to be taken back in time for some new rock. Moving freely around the stage she locked eyes with members of the crowd and delivered the goods with her mop of hair flowing in the stage fans. Dorothy has a very fluid sound that evokes a bit of Heart. They were a perfect warm up for the evening and deserve a longer look as headliner.

Photos from Greta Van Fleet performance at The Masonic on September 19, 2018.

For more information about Greta Van Fleet, check out their website.

Setlist: White Butterfly | Naked Eye | Raise Hell | Ain’t Our Time to Die | Philadelphia | Who Do You Love | Flawless | Down to the Bottom | Freedom

Find out more about Dorothy here.