What was the coolest band to see to celebrate the last day of summer 2016 in San Francisco? The answer is literally Die Antwoord. Led by the dynamic duo of rappers Ninja and Yo-Landi Vi$$er (from Cape Town, South Africa), Die Antwoord present one of the most perplexing and exciting acts to hit popular music in recent memory, and this past Wednesday they brought their strobing cavalcade of musical oddities to the Civic Auditorium. 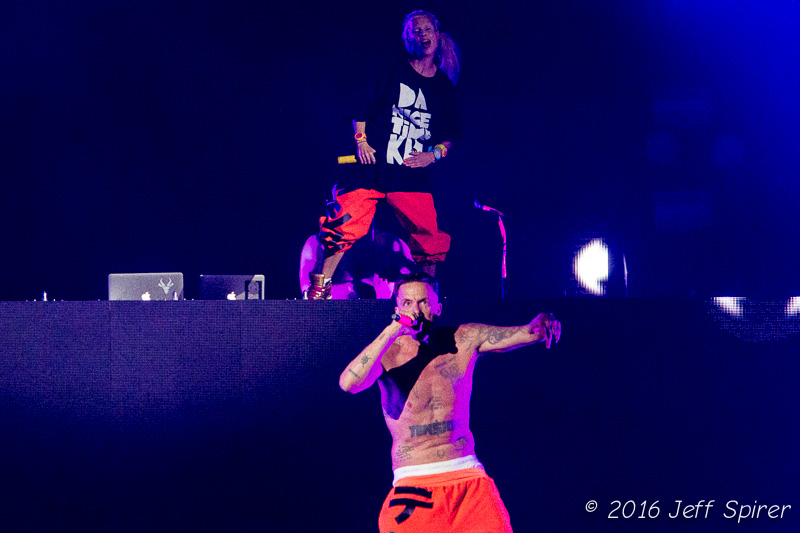 Revealing that you are into Die Antwoord instantly adds points to your street cred to others in the ‘know.’ To those who don’t know of this line blurring hip-hop/techno mash up of a crew, a first exposure will likely elicit a “What the fuck was that??!!” reaction, and perhaps even a shake of the head from those too ‘square’ to understand. 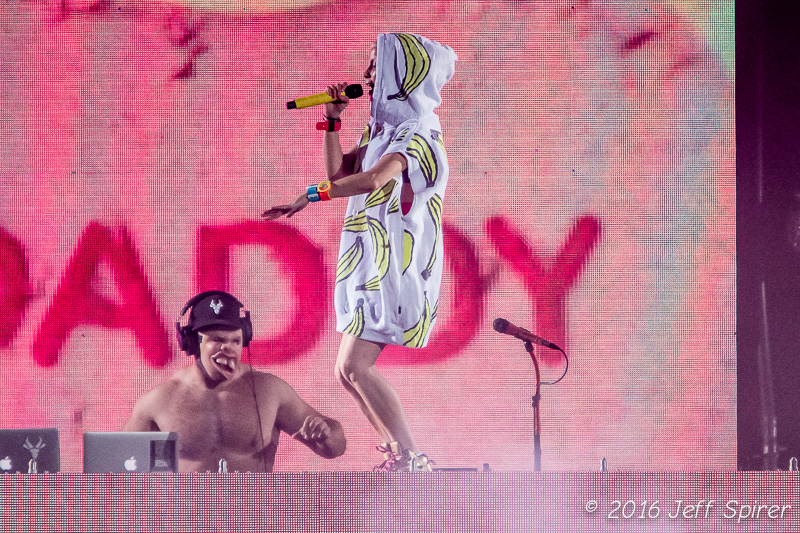 With a punk ethos smashed over alternating bass driven hip-hop and rave beats, the oddly alluring Lolita-esque looks of Yo-Landi, and the ‘don’t give a fuck’ attitude of Ninja, everything about them is intriguingly strange…can’t stop paying attention strange. Their self-proclaimed ‘Zef’ style (South African reference to redneck chic) completes the over the top shock value image. Envision the image combination of ‘Jersey Shores,’ ‘Moonshiners,’‘American Horror Story,’and ‘Cribs’ and you will be in the neighborhood. 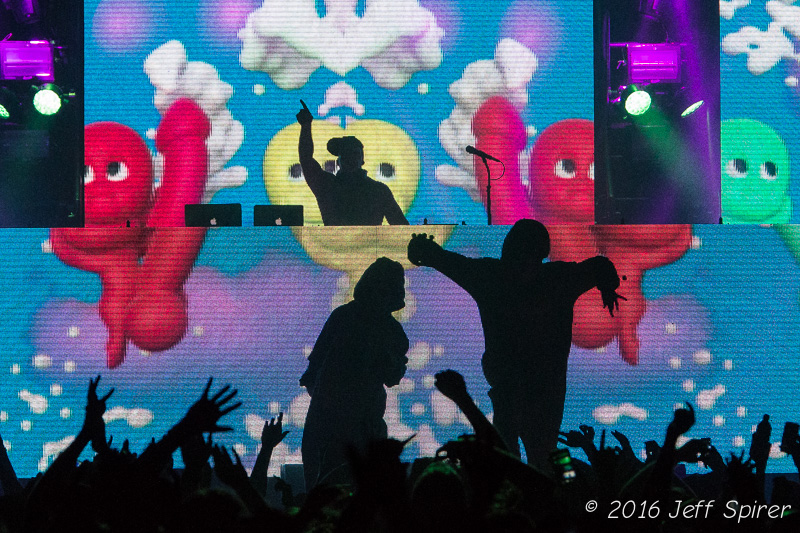 As you have likely discerned, trying to describe Die Antwoord cannot be summed up in a few words, they are literally too fucked up to describe. It is better to see them, and better yet to see them perform live, as the party atmosphere that comes with them is as much a part of their description as is their sound. 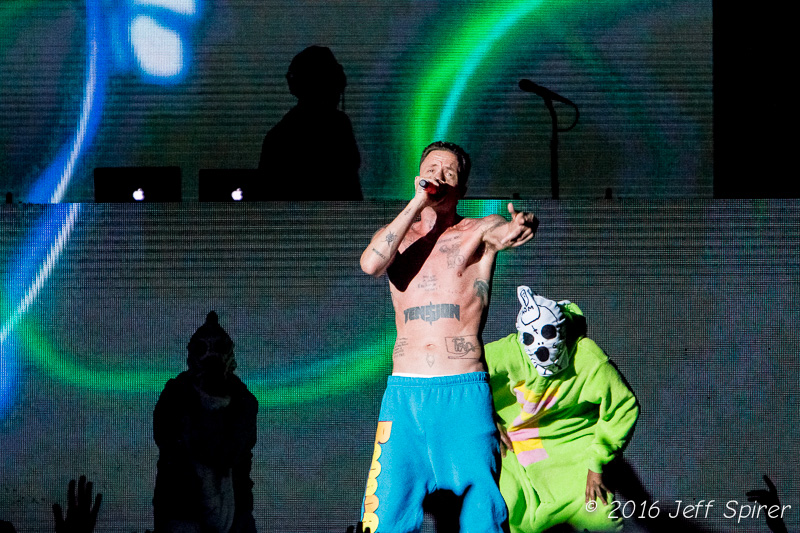 Wednesday evening they and their crowd were in prime form. The vibe of the Civic was like one big rave. The predominantly 20-something crowd was bright and boisterous in their appearance and mood, cramming to the front as the ‘Chanting Monks’ intro signaled the imminent stage appearance of the diminutive Yo-Landi alongside her partner Ninja, and DJ Hi-Tek who rounds out the act for their live performances. 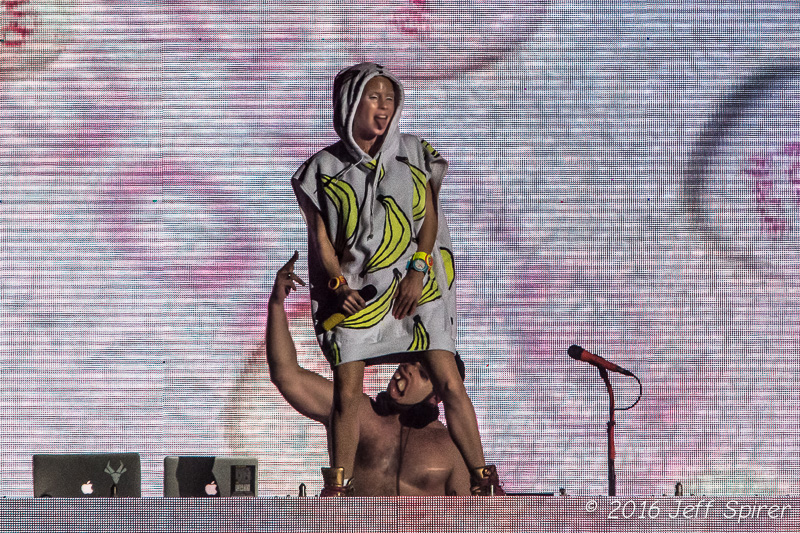 In front of a series of large multi-media screens that were ever changing in ‘Spike and Mike’ style animations of pills, candy message hearts, and cartoon penises, Die Antwoord exploded into ‘We Have Candy.’ Sporting bright orange hoodies they bounced onto the stage and soon it was like the Civic was on a trampoline. From there it was like a giant rave/aerobics class for the remainder of the set. 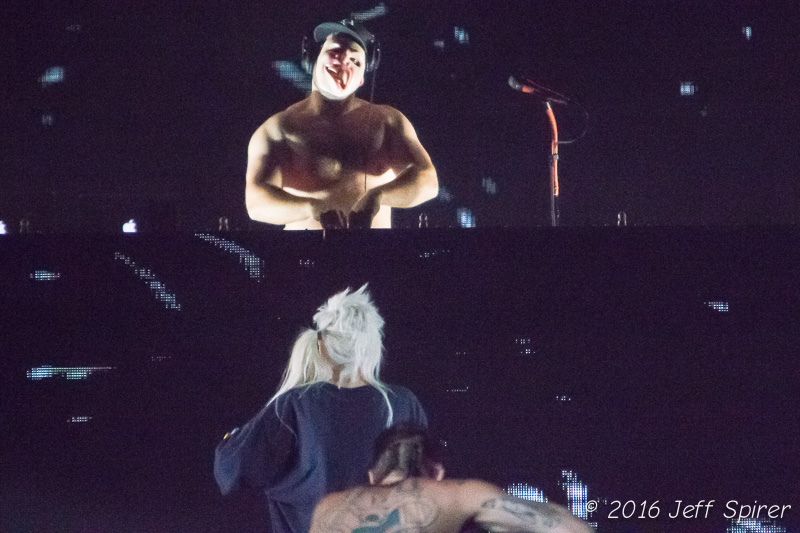 ‘Fatty Boom Boom’ was a showcase of Die Antwoord’s style and substance wrapped into one song. Over an incessantly pounding tribal high BPM rhythm, Ninja displayed his rhyme skills, which give a slight nod to Eminem, but twisted with a bizarre dose of Sid Vicious. All the while Yo-Landi is in constant motion…..running and jumping around like a little kid who has had too much sugar, screeching out her expletive laced rhymes like Minnie Mouse on helium. 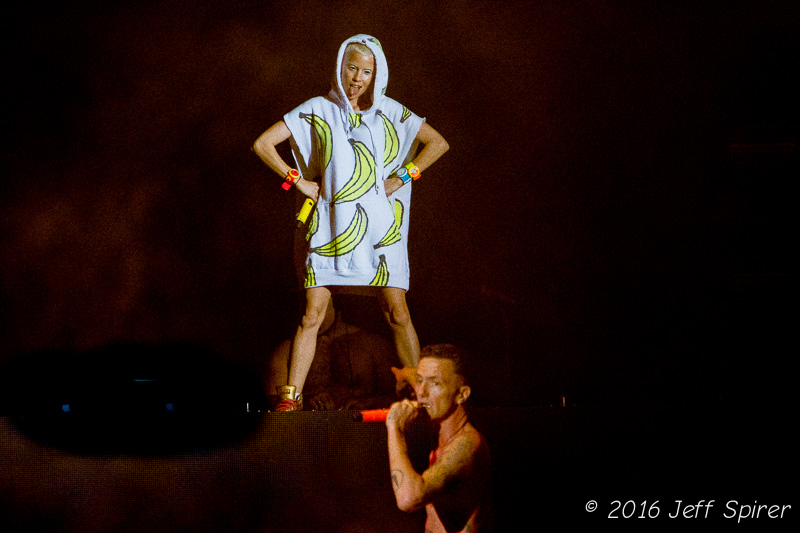 The remainder of the 75-minute set was much of the same. Sick, schizophrenic beats that drunkenly staggered between pulsing neon, high-energy rave, and hybrid down-tempo hyphy/crunk barreled out of the sound system, levitated by palpitating flashes of bright colorful lights. 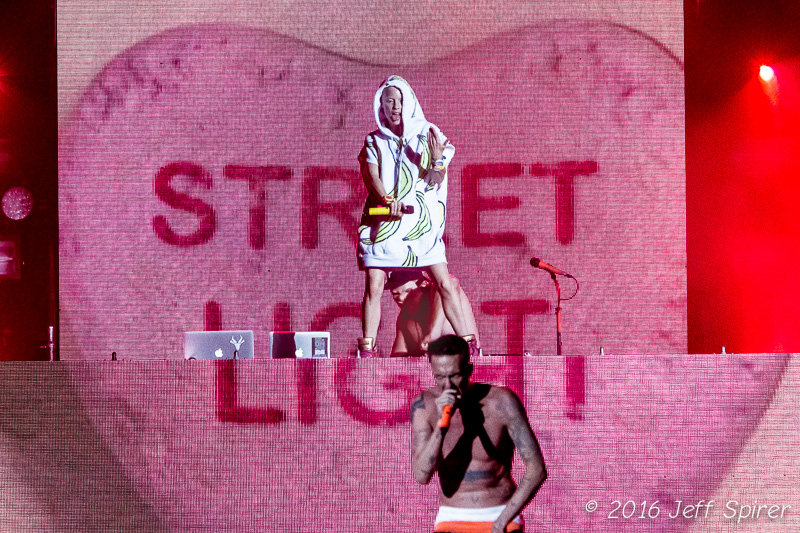 With no stops between songs in their set, the only ‘break’ for Ninja and Yo-Landi was when they went backstage for their many wardrobe changes. For Ninja it was a constant rotation of different colored shorts (including ‘Dark Side of the Moon’ shorts) combined with a hoodie, ‘wife beater,’ (hate that term), or shirtless. For Yo-Landi it was like a little girl in her older sister’s closet. Over-sized hoodies and ripped t-shirts over sport shorts were eventually replaced by the bling of bustiers and short shorts. Hip-hop club wear from the trailer park…..true ‘Zef’ fashion. 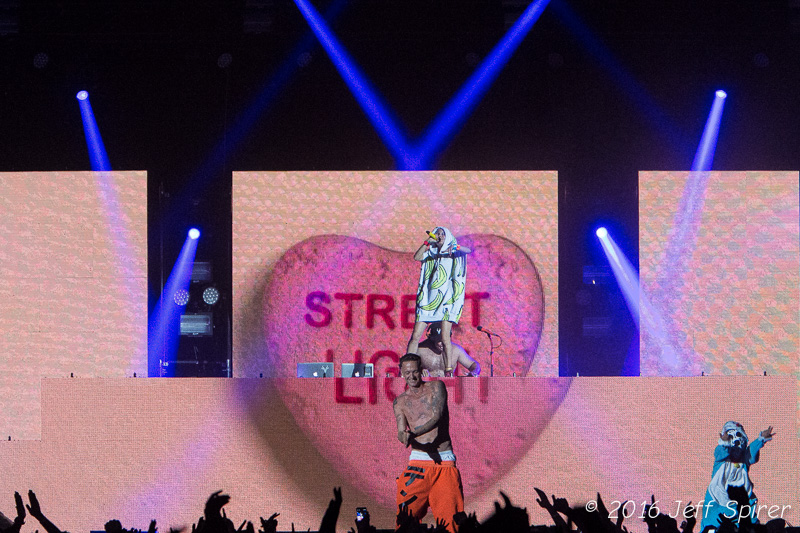 The pinnacle of the evening was the combo of rave inspired selections off the Tension album (2012). ‘Baby’s On Fire’ starting with its break-beat crescendo sent the crowd into a state of delirium. Backing this up with the driving synth smacks of ‘I Fink U Freeky’ with its increasing tempo driving things over the top. It was as if the playing song dosed the entire audience with three espresso shots and a Molly. Folks were jumping and falling all over each other. 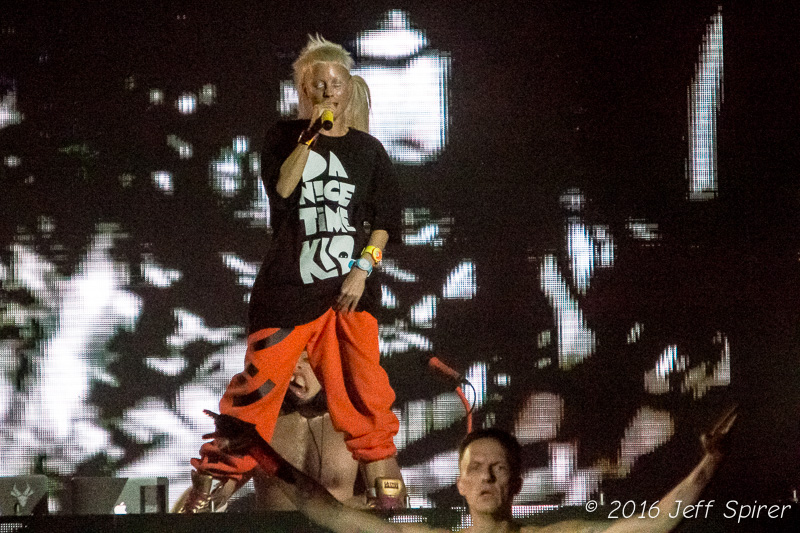 The encore for Die Antwoord wasn’t so much a true encore as it was the first time that the music stopped. Everyone knew they were going to come back out, and the rise in volume of the cheering just seemed like a transition in the set. By the time they finished with ‘Enter the Ninja,’ the song from their 2009 debut offering $0$ that first gained Die Antwoord wide spread notoriety, the audience was absolutely floating. But at 10:30 on a school night, if the party was to continue it would have to be elsewhere.

Whether their star continues to burn hotter or quickly dives and fizzles out remains to be seen. Countless ‘celebrities’ like Katy Perry are trying to get that bump to their street cred bump by name dropping Die Antwoord. What is certain is that at this point in time they are that band. The one that parents don’t want their kids to listen to. The one the kids love because their parents hate it and don’t understand. The one that make folks feel uncomfortable to watch or listen to. The one that is being tabbed as being so good that the depth of their shallowness leaves folks confused.

Crystal Castles opened for Die Antwoord. Less eccentric than Die Antwoord, the band appeals to the same audience. Unlike some shows, the large venue filled up long before the headliners appeared. Nobody wanted to miss the intensity of the performance and the light show, which mostly backlit the band with strobes.

A recent controversial vocalist change, from original singer Alice Glass to Edith Frances, had little, if any, effect on the band’s performance. Frances has more vocal range than Glass but seems a bit less energetic – not that she was lacking energy in any way – than her predecessor. The sound is dense, with pounding electronic beats along with live drumming. It’s not as catchy as Die Antwoord – a bit more screechy and processed, but it is just as danceable. The band played both new songs, more political than in the past if you have a lyric sheet, and some of the best-known older songs from before the vocalist change.

For more information on Die Antwoord, see their website.