The 4th Annual Winter Wondergrass Festival Tahoe came to Squaw Valley recently. So did the weather. It was quite stormy during the first two out of the three days of the busy festival. Snow, sleet and rain took their turns in the mountain region before things finished up sunny on the third day. 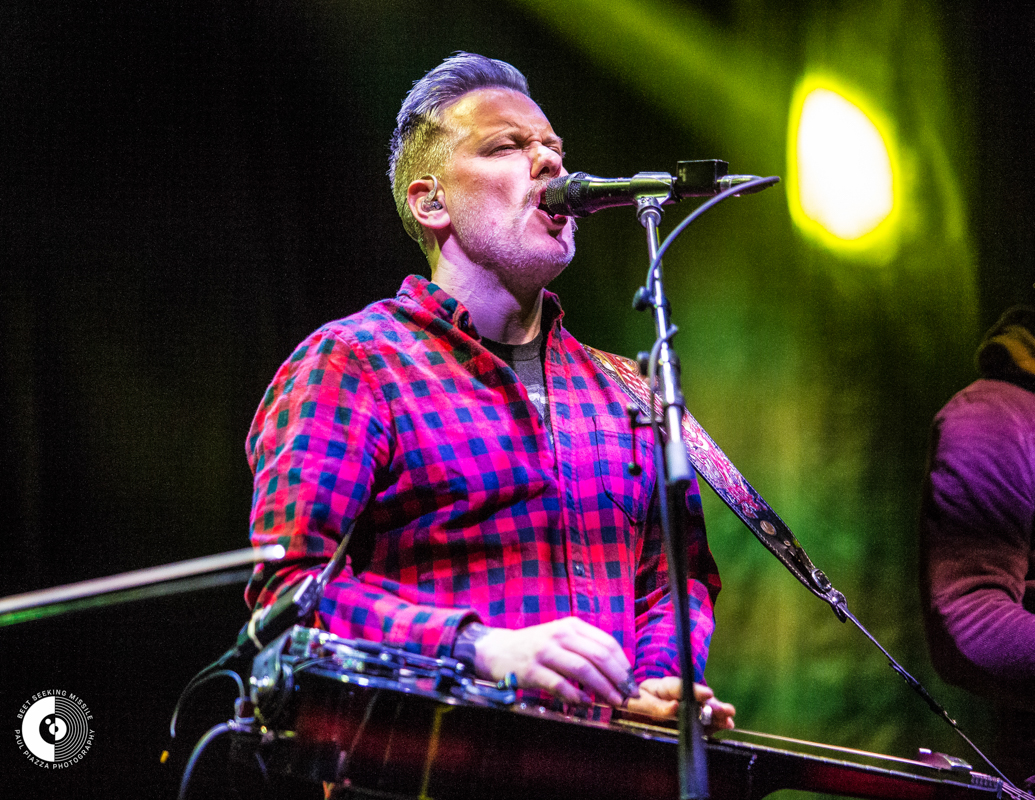 Andy Hall of The Infamous Stringdusters

A big storm came in on Friday and rain started early in the day with fans watching tentatively as the skies opened up on the outdoor event. This was followed by sleet and snow for most of the day on Saturday. But because organizers were so prepared, things ran smoothly. The Squaw backdrop was a perfect setting for a picturesque late winter outdoor music and beer tasting festival in the mountains. Despite the weather, the festival staff and crew handled all technical challenges and seemed ready for every kind of weather. Almost every band played their set right on time. 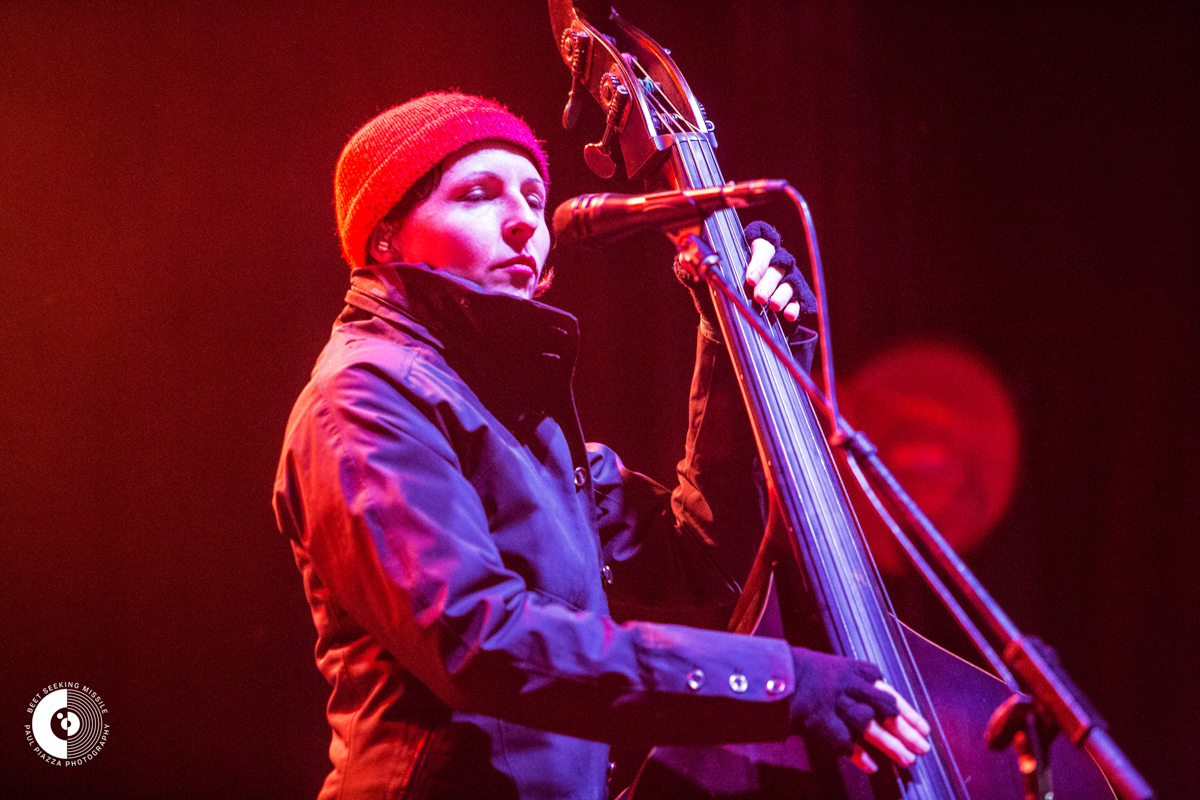 Naturally, most fans came prepared as well. Many were dressed in all-weather gear. There were costumes, colorful outfits and lots of amazing headgear – most of it in the winter-style. Only a few people showed up in flip-flops. But even if you weren’t dressed in enough protective layers, there were huge tents that one could duck out in during the stormiest parts of the event. 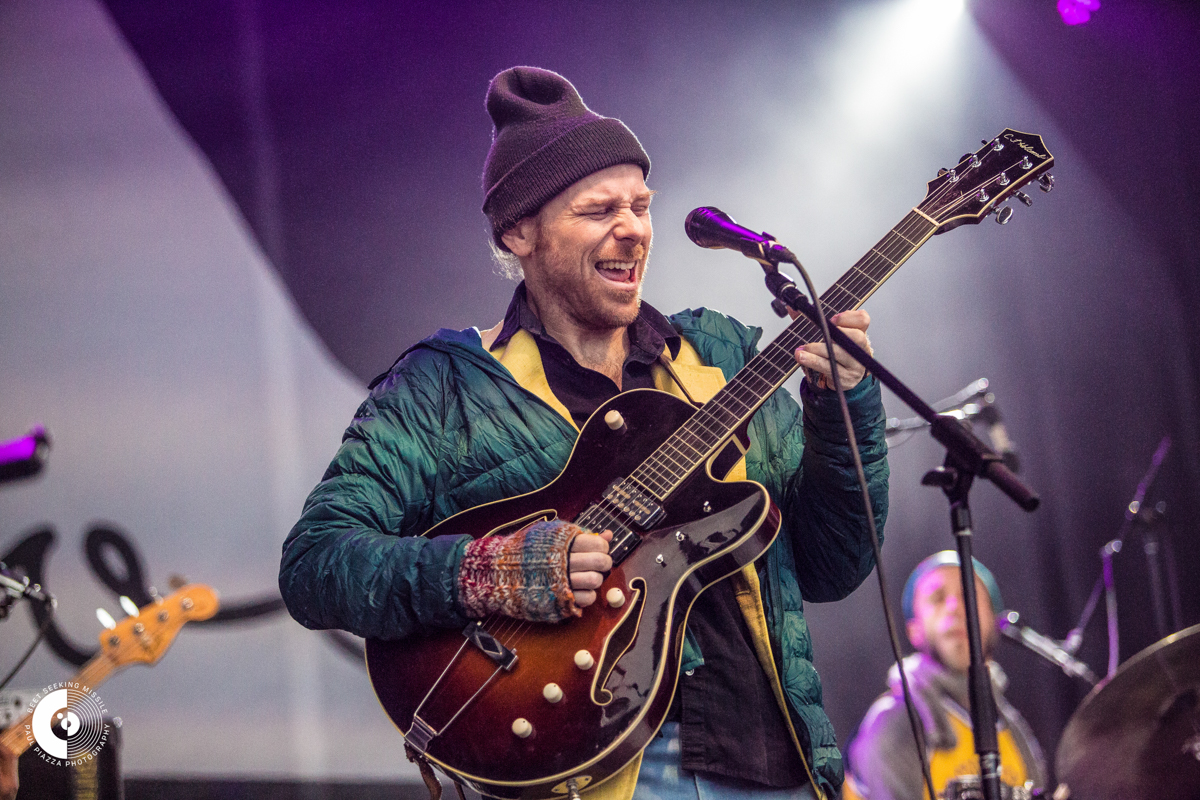 Lech Wierznyski of The California Honeydrops

However, what people brought to this event that seemed even more important was an adventurous and flexible attitude, despite the sometimes extreme weather. That, combined with the slick organization of the event, made things flow smoothly. The way people were frolicking, this could have been a mid-summer’s concert with mild weather. Smiles were seen all around and people making room for others in the tents when storms began to rage a bit. It didn’t hurt that there was also daily beer testing in the three big festival tents that surrounded the general admission area.  Almost twenty breweries were represented in the beer tasting, including such regional heavy hitters as Berryessa, Knee Deep, and Kern River. 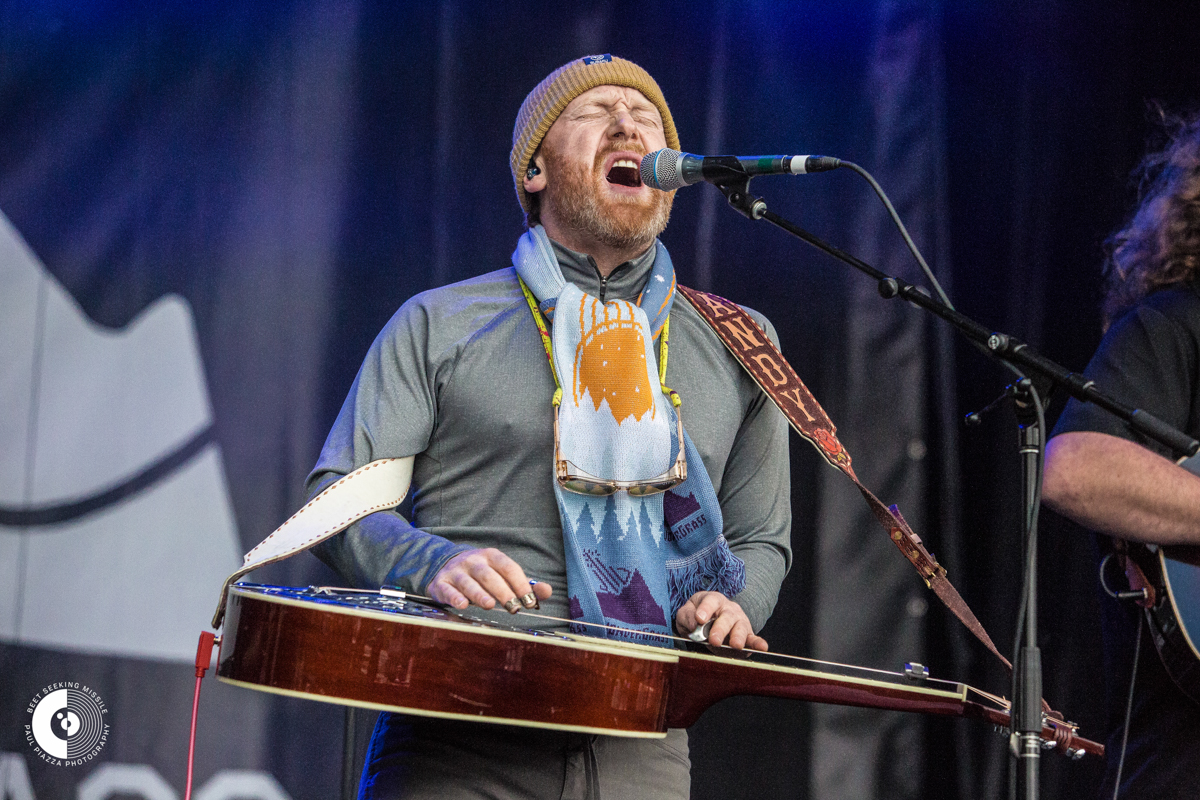 This trio of huge tents (Jamboree Tent, Pickin’ Perch, and Soap Box) also served as music rooms. There were bands scheduled in each tent for thirty minute “tweener” sets in-between the main stage acts. This went on for most of each day. There wasn’t really any time to get bored. And if you got bored, you could go hula hoop out in the snow. 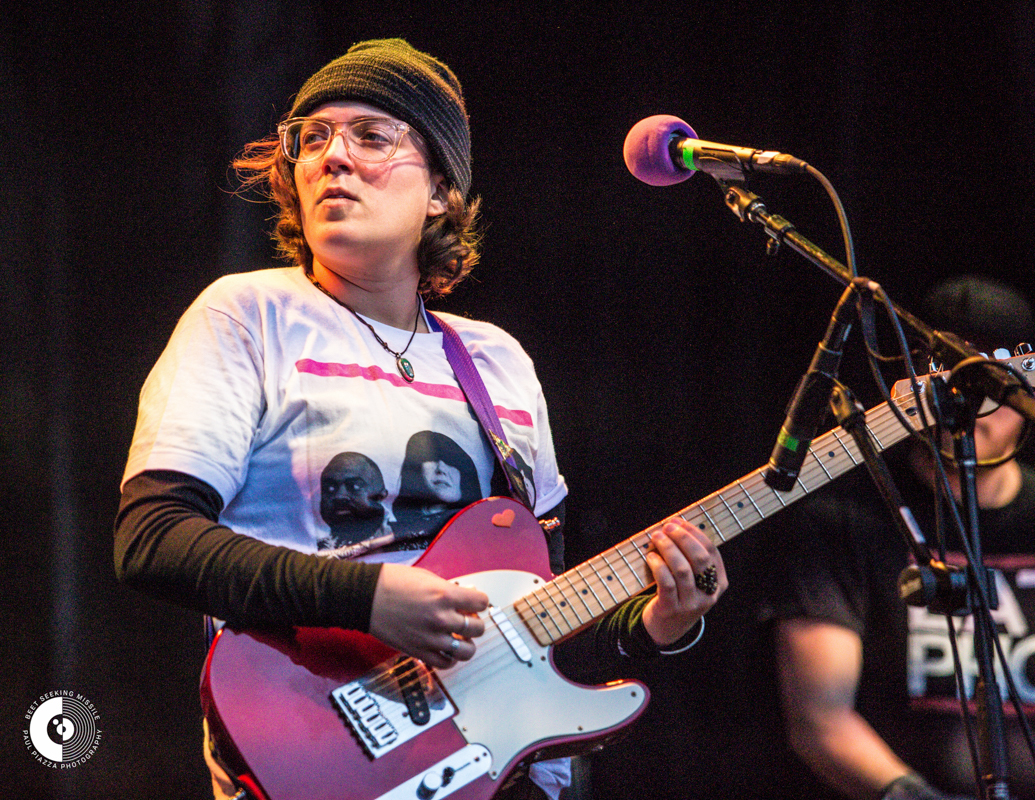 The music at this year’s festival featured many great local, regional, and national bluegrass acts. The festival’s trio of headliners were solid choices. Friday night featured The Infamous Stringdusters, who recently won a Grammy for their album Laws of Gravity. Saturday night was headlined by The Devil Makes Three, a Santa Cruz based trio who are influenced by artists as diverse as Django Reinhardt and Iron Maiden and dress sharp in red and black. They write amazing songs about hard livin’ and lovin’ that often sound as they’ve been teleported from the 1920s. On Sunday there was Railroad Earth, the excellent New Jersey based band who are staples on the festival circuit and whose members are most likely to pop up on stage and jam with other bands. Great choices all. 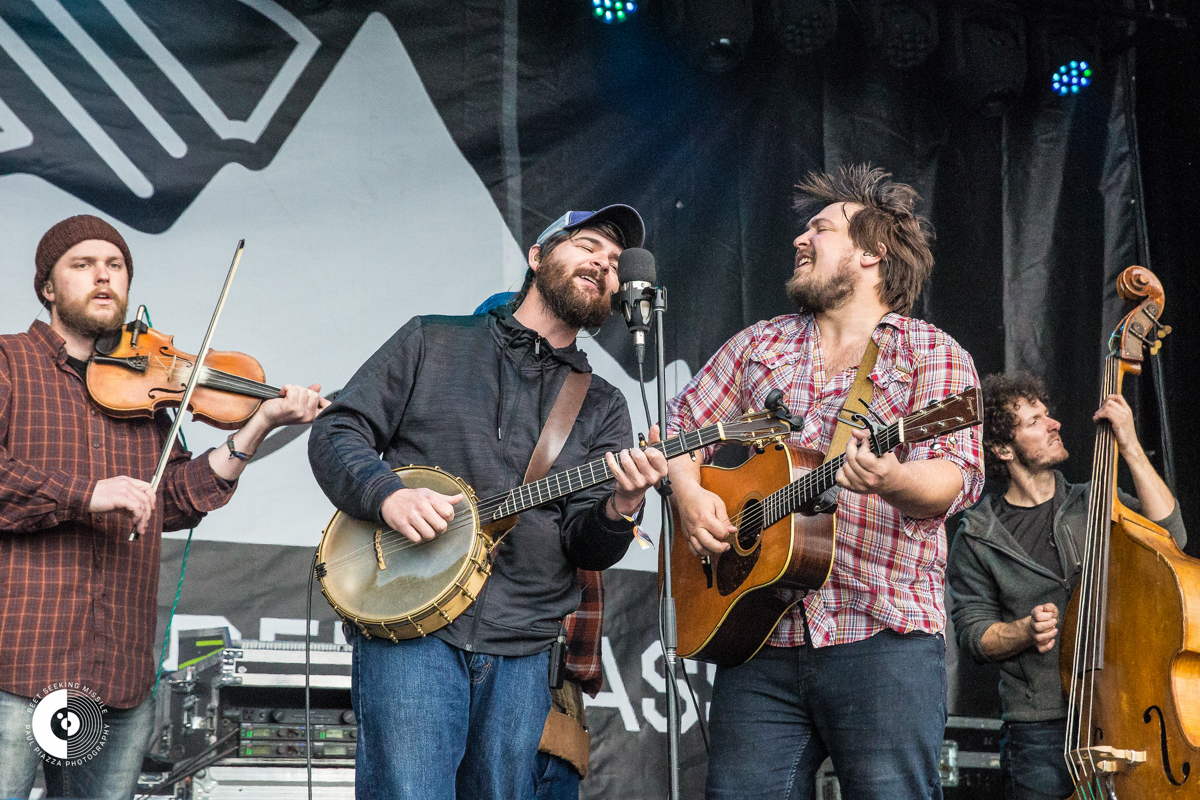 There were plenty of other great bands on the undercard. There was the Lil’ Smokies of Missoula, Montana. This quintet is quickly climbing up the ranks of the bluegrass/jamgrass world due to their extremely sharp chops and excellent cover songs. The band stuck mostly to originals, more than a few from their great new album Changing Shades, during their main stage set. 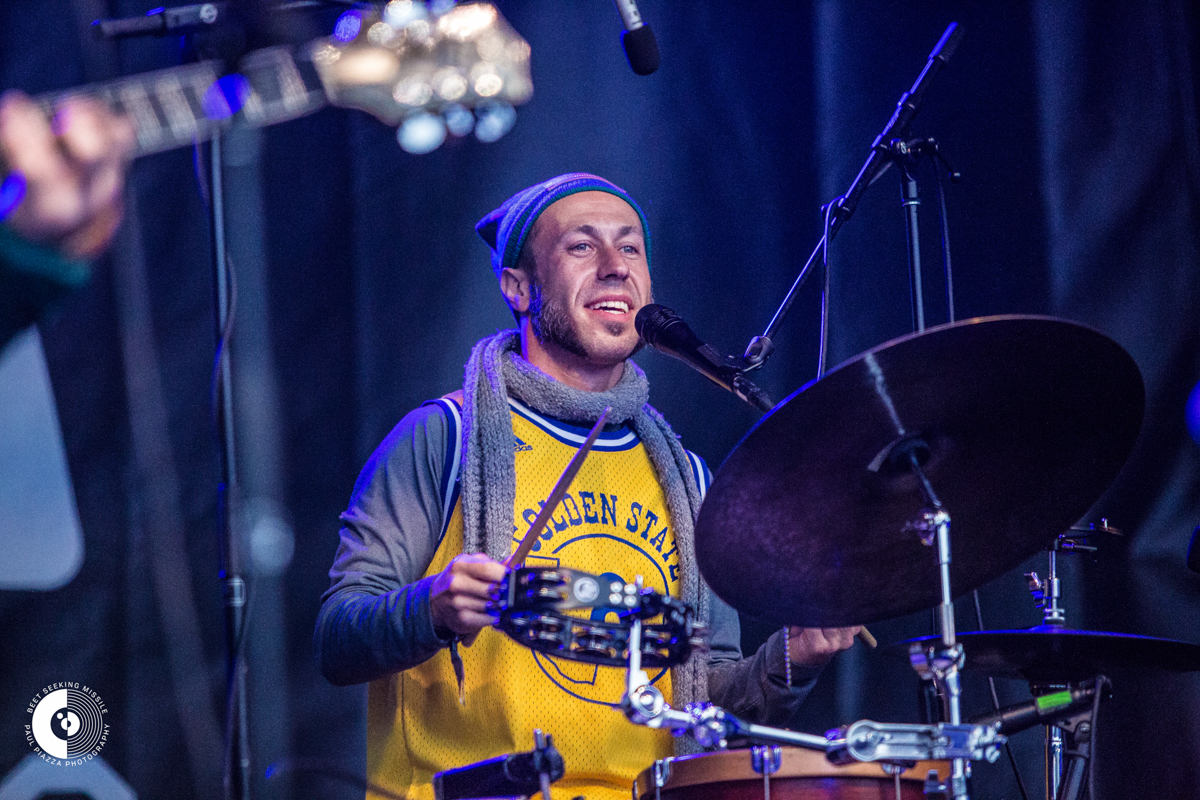 Ben Malament of The California Honeydrops

There were also The California Honeydrops and Fruition, a couple of great acts who don’t really quite fit the bluegrass mold, but fit right in perfectly with the festival ethos. The Honeydrops, who are based in Oakland, just dropped a fantastic new double album called Call It Home: Vol.1 and 2 that features Bonnie Raitt on the title cut. They have an irresistible charm that stirs in their sound, which encompasses street corner soul, roots, Delta blues, Bay Area R&B, and New Orleans style gumbo. Portland’s Fruition are a band that successfully blurs the lines between jam bands and bluegrass. They embrace rock and soul and Americana. Both of those bands were embraced wildly by the crowds while they played late-afternoon excellent sets. 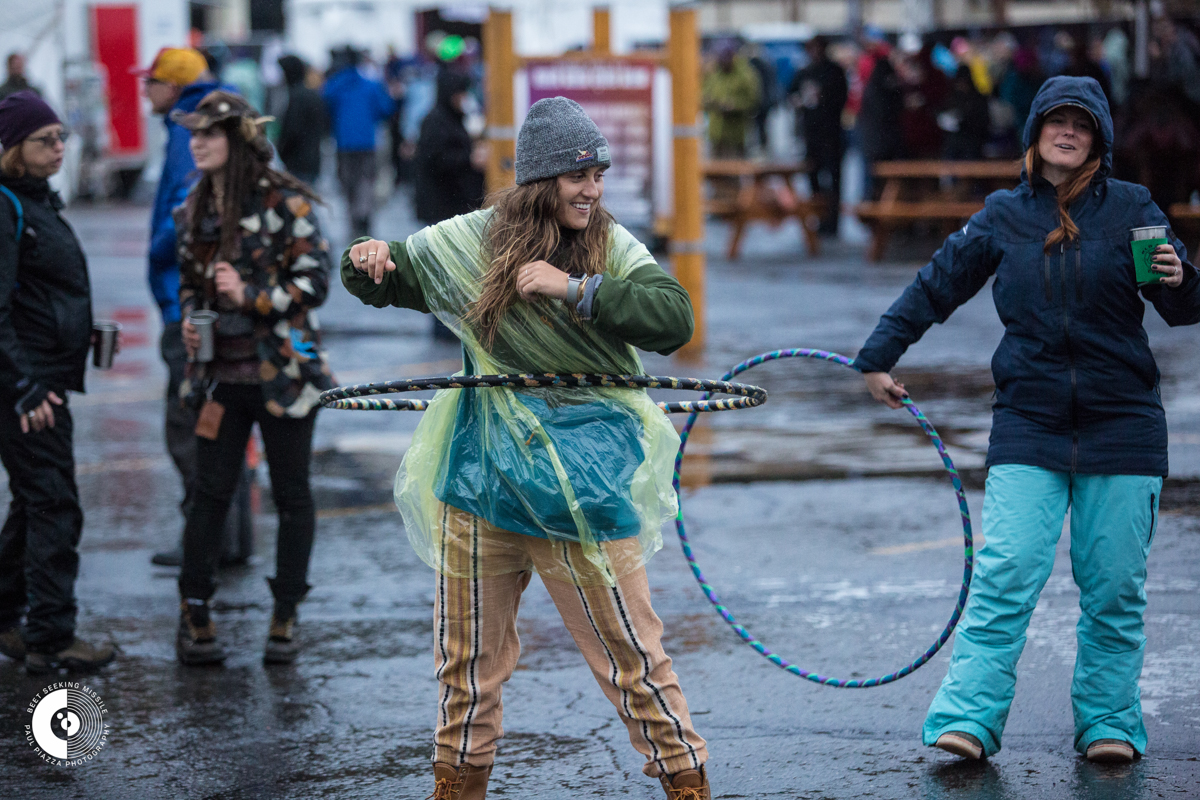 Hula Hooping In the Rain

Vocalist/guitarist Vince Herman of Leftover Salmon served as kind of a roving ambassador of musical goodwill. The larger-than-life Herman made an impact sitting in with bands and lending his considerable exuberance and skills to both the music and late-night mescal drinking with another great band on the bill, Horseshoes and Hand Grenades. The young Wisconsin based band hit their stride at this festival, playing both the main stage and a couple of memorable tweeners. 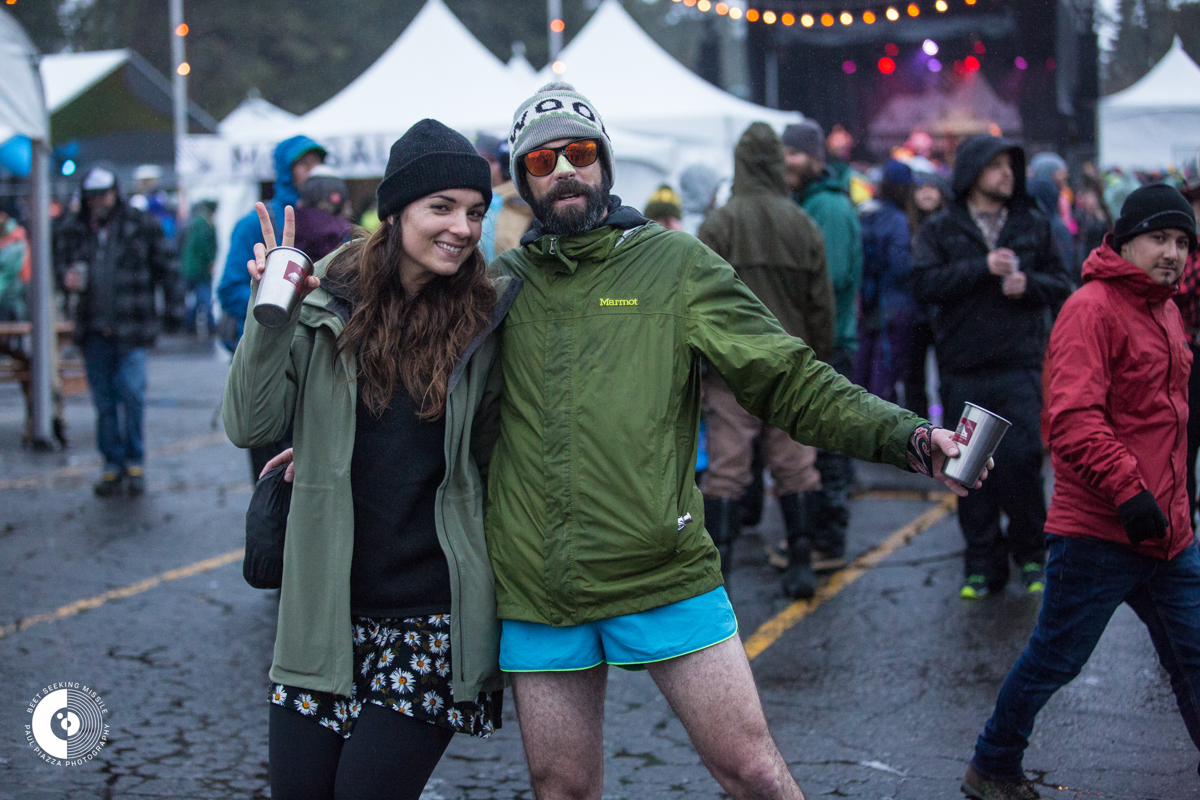 As festival’s go, this one couldn’t have run any smoother. Despite the weather challenges, the festival staff kept things moving and running on time. Winter Wondergrass is in its fourth year in Tahoe and there is a sister festival that originated the event in Steamboat, Colorado. That one just surpassed its sixth year. Based on the sell-out in Steamboat and the near sell-out in Squaw (Saturday was a complete sell-out), it appears these solid, snowy festivals will continue to bring winter magic to California and Colorado for quite some time to come.