After 37 years as a band, 14 studio albums, and a number of times around on the rock and roll rollercoaster, 2018 Rock and Roll Hall of Fame nominees Depeche Mode (DM) are on a mission to start a revolution. To create a conduit for this rally cry, the iconic band from Essex, England brought their Global Spirit Tour to a sold out Oracle Arena. 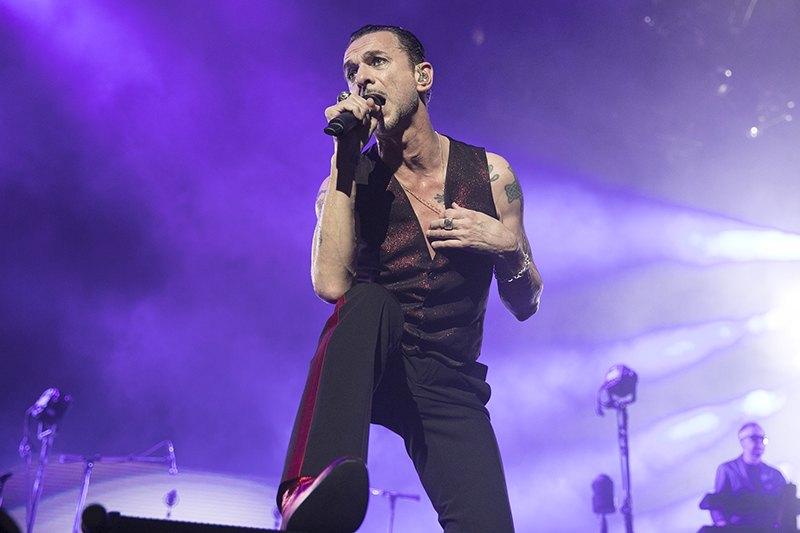 Ordinarily a raucous October sellout at Oracle Arena would mean Steph Curry and the Warriors are embarking on another journey toward an NBA championship. However on this evening there was no game, it was all serious business and the message was blunt and clear, as DM paraded onstage to the timeless sounds of The Beatles’ classic ‘Revolution’. 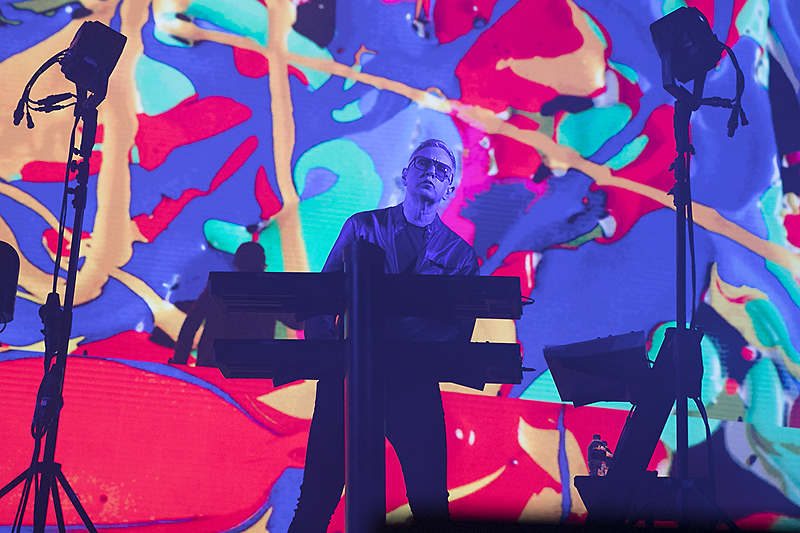 Lead singer Dave Gahan was the last to walk out onto a stage backlit by a gigantic screen projecting vibrant abstract color splashes. Immediately the predominantly 30s and 40s female crowd transformed back into teenage girls, piercing the air with high-pitched shrieks that were a staple of Beatles shows. 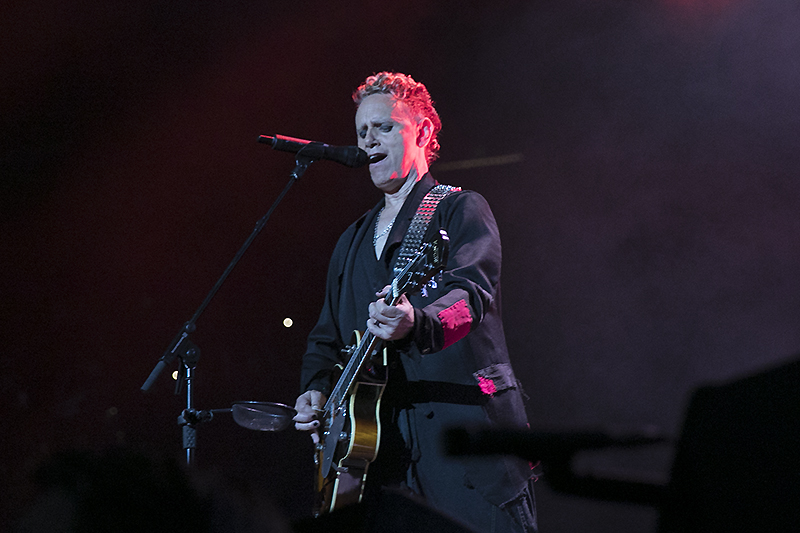 As Gahan, with his hair slicked back hair and sporting a Clark Gable style mustache, preened and whipped the crowd into a tizzy, the band led by fellow founders Martin Gore (keys/guitars/vox) and Andy Fletcher (keyboards), along with Peter Gordeno (keys/bass/vox) and Christian Eigner (drums) kicked into ‘Going Backwards’ (the lead track from Spirit – 2017). 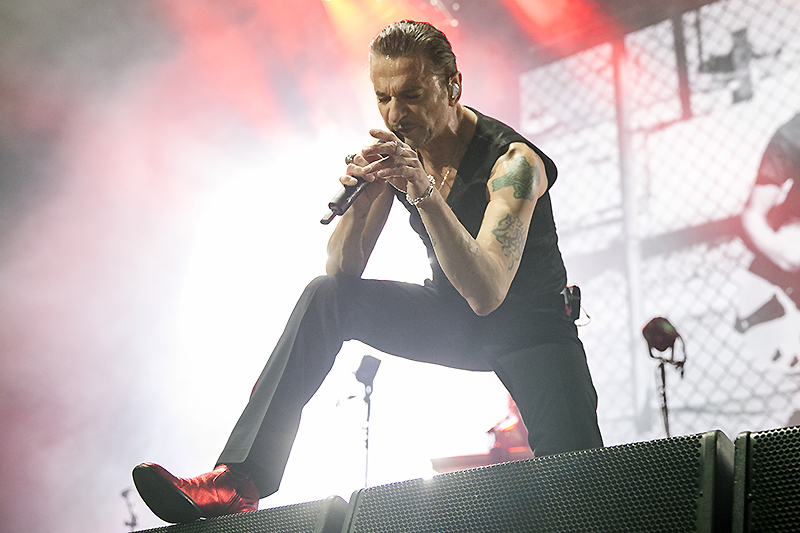 The introduction of the show encapsulated what DM has become in the midst of the craziness of 2017. DM is back with a purpose and a message. With their new album Spirit serving as a platform to articulate their political call to action, the message to implore fellow earthlings to unite and push back against the current global agenda put forth by an intolerant, aristocratic oligarchy was blasted early and often. 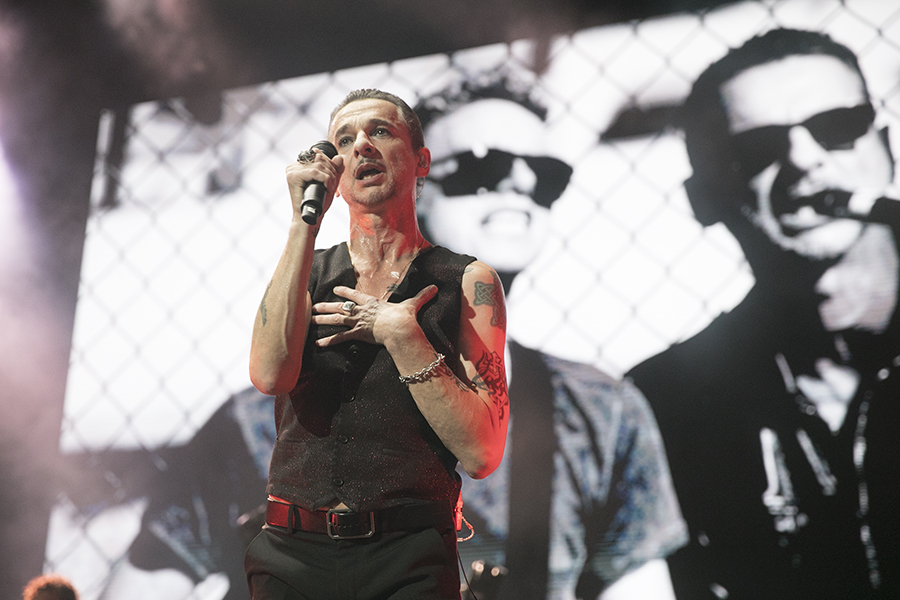 A sublime trait of Depeche Mode has always been their ability to dress the political streaks in their music in infectious pre-industrial electronic beats and synth tones that are unmistakably theirs. This chameleon like tendency is what has blurred lines and enabled DM to be a pioneering influence for electronica, industrial, synth pop, goth, new wave, and alternative bands alike. 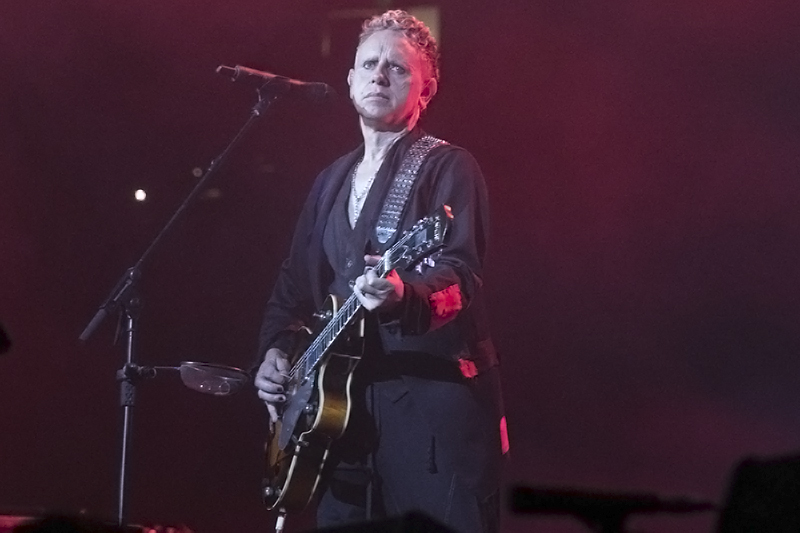 This marriage of message and techno-drenched tribal grooves propelled the set as DM treated the crowd to a sampler platter of the hits that took them through the underground club scene, through the ashes of band drama and turmoil, and back to their role as a global rock phenomenon. 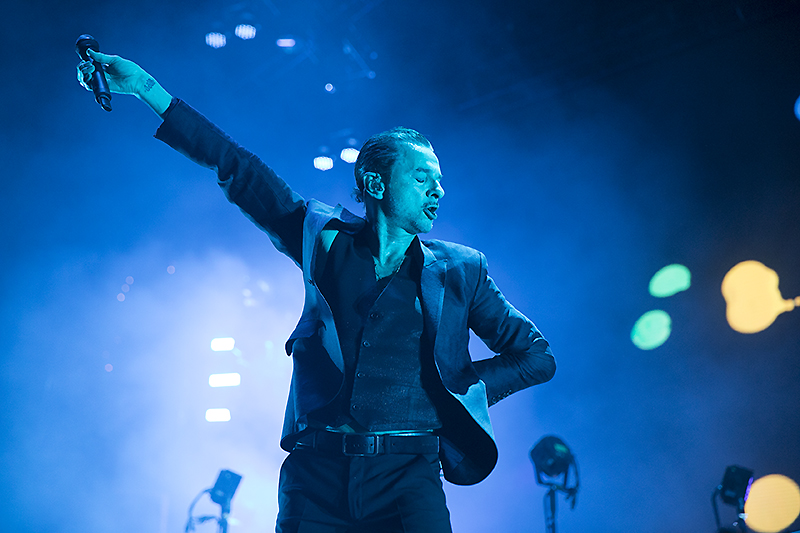 There was the new Spirit material, including the techno-jam ‘So Much Love’ which unleashed the Kraftwerk style driving beats that were so prevalent in early DM material. ‘Where’s the Revolution’ with its unmistakable call for people to fight for their rights (“Where’s the revolution…come on people you’re letting me down”), and the space man journey ‘Cover Me’ reminded the crowd of 19,000 strong of the Depeche Mode they had grown to love, and what they had been missing the last four years. 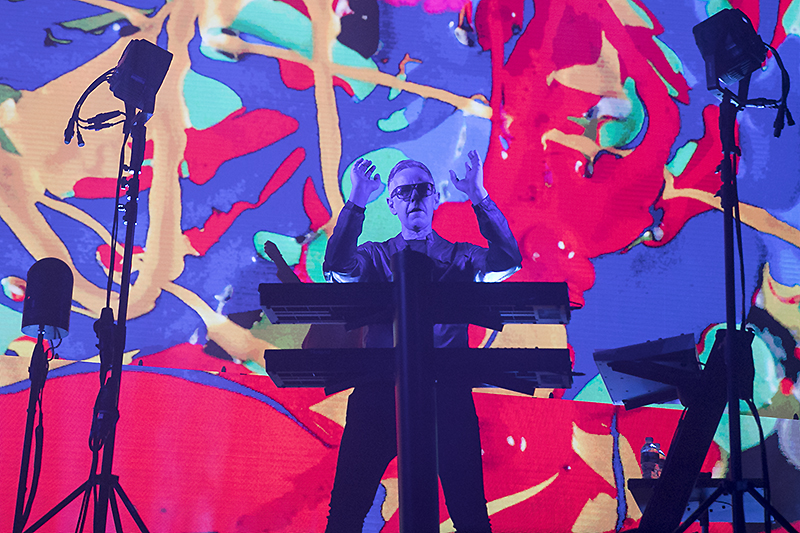 That’s not to say that DM was not going to dip into the deep well of signature dance cuts that served as their flashpoint to success as hybrid audio/video/fashion stars. More than dip into it, they dove in. This was never more evident than when the irrepressible Martin Gore took center stage to perform ‘A Question of Lust’ (from the epic Black Celebration – 1986). Gore, who was only accompanied by the clean piano playing and backing vocals of Peter Gordeno, absolutely lit the place up with his powerfully plaintive vocals.  When he steps up and brings down the house, as he also did on the first encore song ‘Somebody,’ it brings into focus the critical role that Gore contributes to the legendary sound. 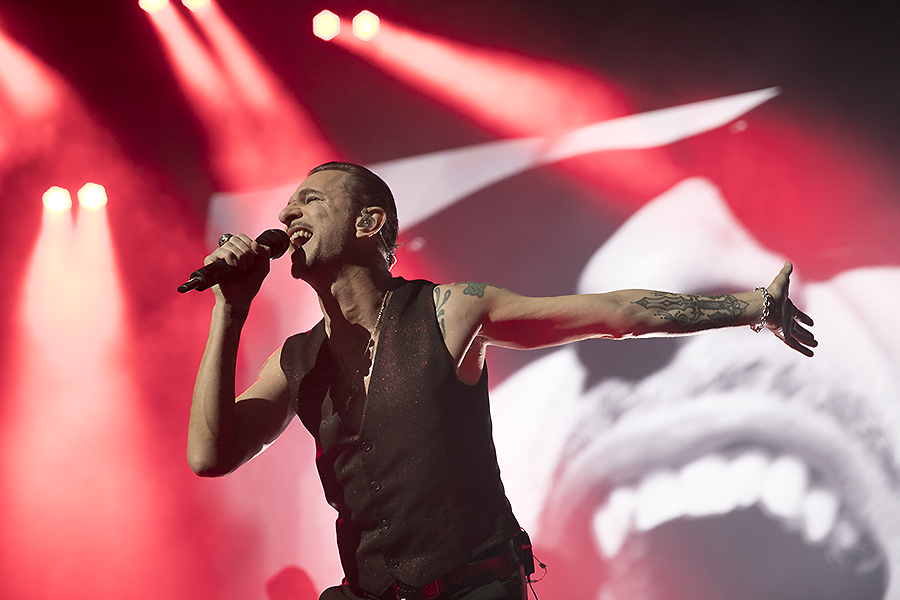 With Gahan getting the most of the audience attention when he is out front, it is easy for Gore to fade to the background. But after he gets his bit of the spotlight it is impossible to ignore that Gore is the glue to this band be it with his stellar multi-instrumental presence or his backing harmonies. 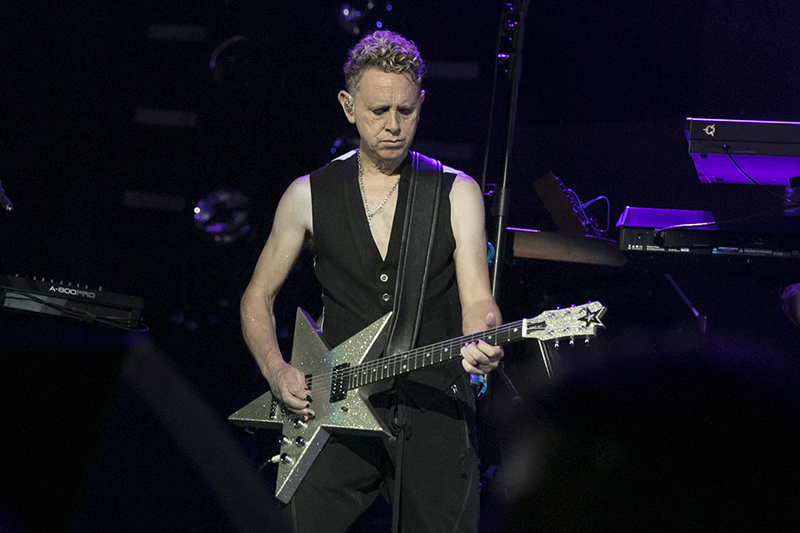 That’s not to say that Gahan does not deserve the lion’s share of the spotlight. He is after all one of the most dynamic and alluring front men in alternative rock and revels in strutting and dancing around stage, playing to the crowd like a True Blood version of Mick Jagger. 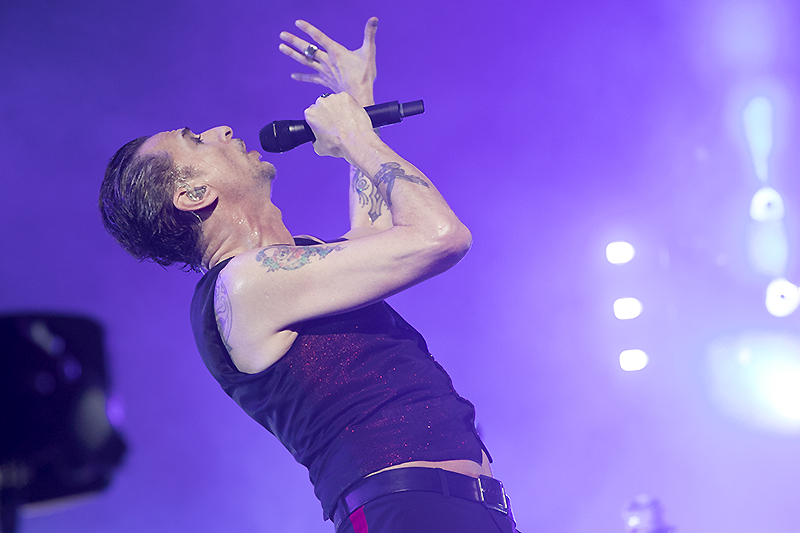 The night ended with a rollicking version of ‘Personal Jesus’ (Violator – 1990), a crowd favorite highlighted by the incessant tribal pulse furnished by Christian Eigner from behind the kit. Eigner was a surprise standout of the evening giving an organic, heavy ‘rock’ element to the dynamic live performance, balancing the trademark DM synthesizer driven melodies. The only regret heard as DM fans filed out is that they did not play ‘People are People.’ On this night that political message was absorbed by the call for revolution.

Starting the night was the fantastic female foursome Warpaint (from Los Angeles). Playing and releasing records with their current lineup since 2009, Warpaint were very reverent to the fact they were playing with Depeche Mode. They brought a ton of energy to the stage, doling out dark, dream pop, dance floor shakers to the delight of the early crowd in attendance.

Touring on their latest offering ‘Heads Up’ (2016), Emily Kokal (vox, guitar), Theresa Wayman (guitar, vox) Jenny Lee Lindberg (bass, vox), and drummer extraordinaire Stella Mozgawa, played a tight, well-crafted set that highlighted catchy, brooding grooves such as ‘Heads Up’ and ‘Disco//Very’ (Warpaint – 2014). When they lock in, it is apparent that Warpaint’s roots run deep, being influenced not only by DM, but also by the likes of Joy Division, and Siouxsie and the Banshees. They keep these dark influences fresh by infusing a playful swing to their delivery to get the crowd out of their seats.

Setlist: Revolution (The Beatles song) | Cover Me (Alt Out) (instrumental video intro) | Going Backwards | So Much Love | Barrel of a Gun (with ‘The Message’ (Grandmaster Flash) snippet) | A Pain That I’m Used To (‘Jacques Lu Cont’s remix’ version) | Corrupt | In Your Room | World in My Eyes | Cover Me | A Question of Lust (acoustic) | Home | Poison Heart | Where’s the Revolution | Wrong | Everything Counts | Stripped | Enjoy the Silence | Never Let Me Down Again || Somebody | Walking in My Shoes | “Heroes” David Bowie cover) | I Feel You | Personal Jesus

For more information about Depeche Mode, see their website.

Find out more about Warpaint here.