San Francisco is known for its fog, but usually it is the fog socking in the Golden Gate Bridge or rolling over Twin Peaks. On this day however, neither of those classic scenes are the reason for the haze over the city by the Bay.  The reason instead is that April 20, 2018 was the first recreationally legal 420 celebration in San Francisco. 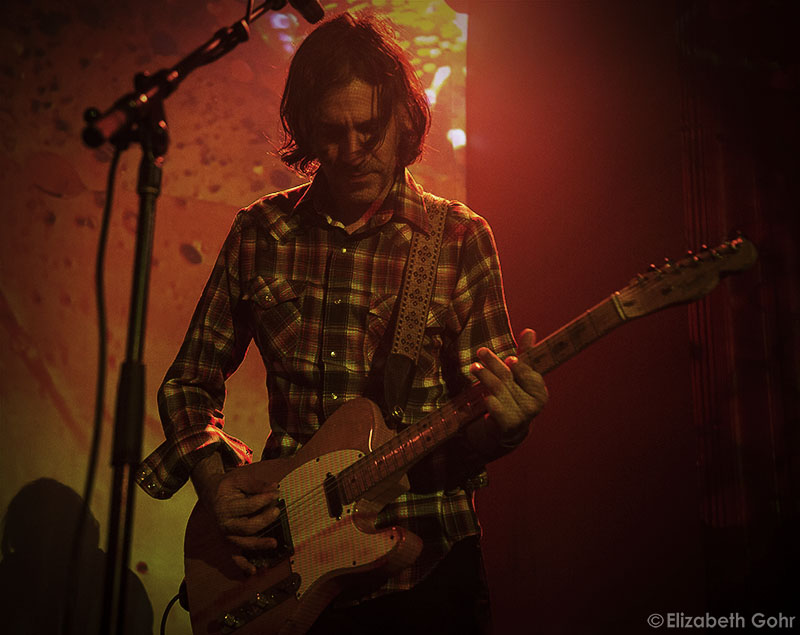 Besides the obvious (puff…puff…give), what is be the best way for stoners to spend this landmark day in the city?  Get super-baked and go see Dead Meadow at The Chapel!!  That is what a few hundred half-lidded stoner rock fans did to celebrate the high-holiday, and they were not disappointed. 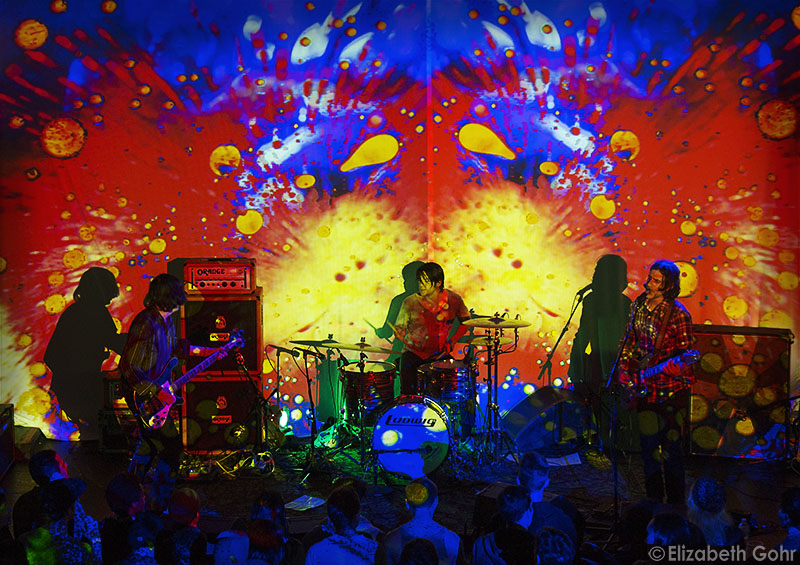 Hailing from our nation’s capital, Dead Meadow (Jason Simon – vocals and guitar, Steve Kille – bass, and Mark Laughlin – drums) were the perfect choice for a 420 bash. From the moment they sauntered onto the stage for a final line check (leaving a looping swirl of guitar notes and scratches playing to the house before returning a few minutes later) until they finished redecorating the Chapel with their psychedelically hued auditory paint nearly two hours later, they lifted an already levitating room, and ultimately outlasted the assembled crowd.

Mashing together a hazy stomp of 70s hard rock and 60s psychedelia, and sprinkling in mystical lyrics and a psych out light show, this trio of musicians wove a tapestry of sound that saluted a trio of reasons to celebrate. 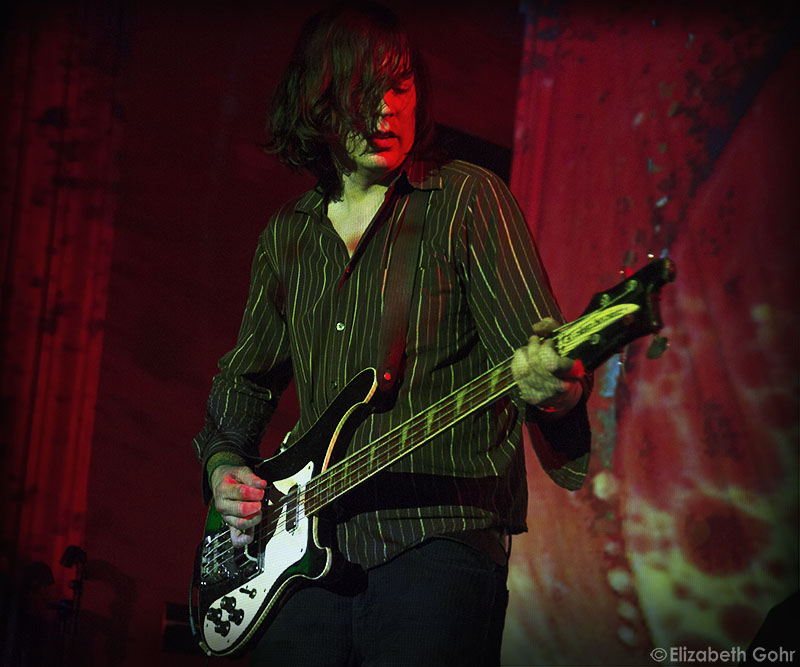 The 420 celebration being the most obvious reason, while the other two are for true fans of the band. This year is the 20th anniversary for Dead Meadow as a band, and they recently (March) released their first recording in five years ,The Nothing They Need.

Using the new material as the deep well for their palette of colors, Dead Meadow gently hammered their stoned brethren, dousing them with warm washes of guitar layered in delay, chorus, and wah, then  heaving them against the shore of jagged, rampaging drum beats. 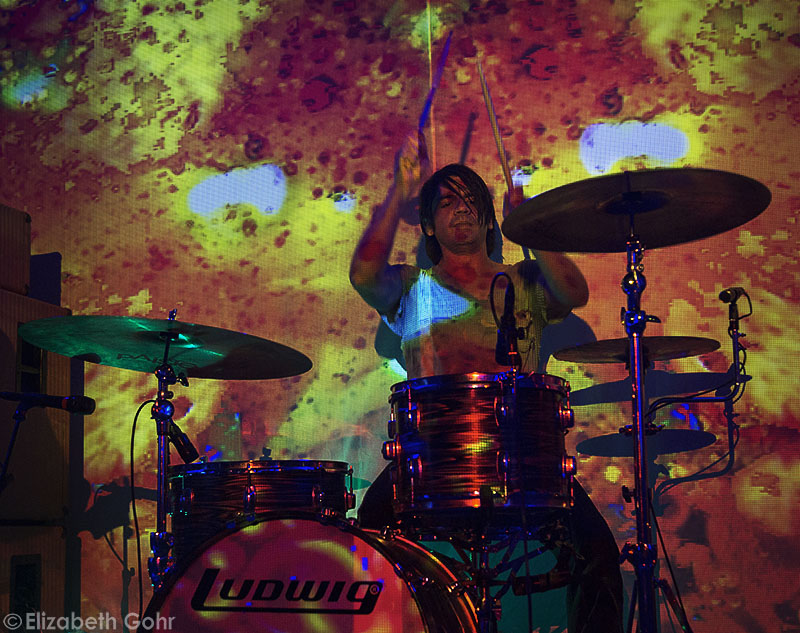 Experiencing Dead Meadow is like re-watching your favorite movie, it is comfortable and familiar territory, but each time you watch you notice something new. As such, the material on The Nothing They Need, while not groundbreaking, is consistently good and breathes in a way that makes you want to take a closer look.

On this evening, the way that the band steered the ship for the 420 show was an epic and meandering drift through a spectacular fuzz-drenched forest. Cosmic pit stops along the way included some standouts from The Nothing They Need. 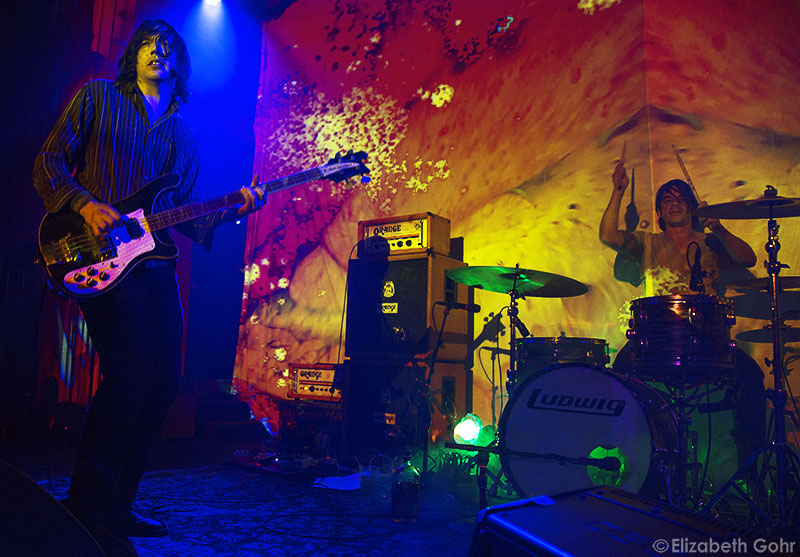 ‘Keep Your Head,’ with its slow blooming color bursts and Simon’s narcotic serenade caused the crowd to sway in time like willows on a breezy day. While ‘Nobody Home’ prompted the whole room into a staggering lurch centered around on Laughlin’s Ginger Baker styled beats. As plumes of smoke wafted through the hall catching streams of light dancing above the heads of eyes closed space travelers grooving in place, that familiar and comfortable carefree vibe surfaced and evoked the feeling of lazy days gone by. This is quintessential Dead Meadow, and is a quality that many bands seek but never grasp.

As the set progressed, the long day of 420 celebrating seemed to catch up with many in the room. While the band pushed forward, reaching back for classics such as the droning haze of ‘Sleepy Silver Door’, the crowd seemed either too stoned, too tired, or just too mesmerized in sonic bliss to really react….they were all just along for the ride at this point. 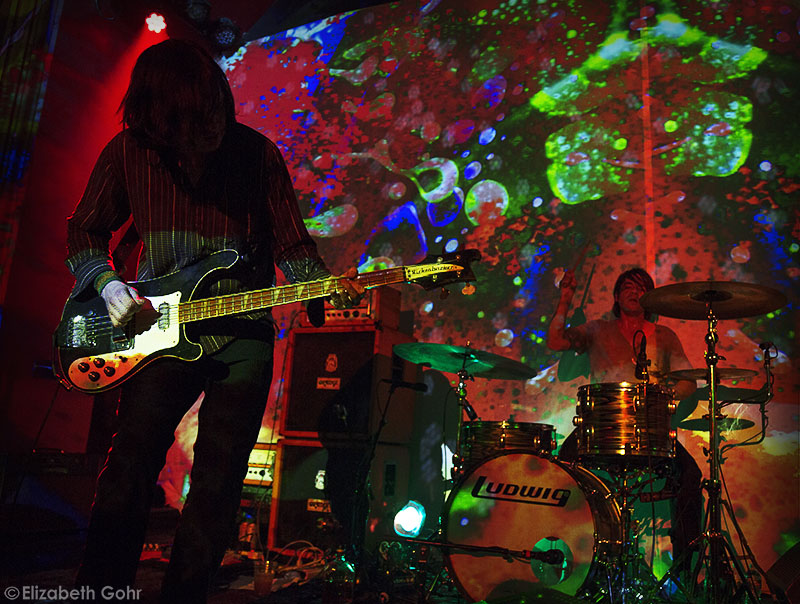 In the end, Dead Meadow did what Dead Meadow does…deliver high quality sonic helium filled heaviness. While it may not be a distinct pivot from where we last left off with them, it does not need to be nor do we want it to be. In today’s climate of impatience and always wanting something different, sometimes the best tonic is re-watching an old favorite and taking a bong rip. On this 420 night Dead Meadow sent everyone home on a perfect floaty high.

If there is such a thing as ‘early’ in the stoner world, the folks that arrived early to The Chapel were treated to the soothing trippiness of Trans Van Santos (TVS). From the DMT influenced mind of the Bay Area’s own Mark Matos (Os Beaches and Family Folk Explosion), TVS is psycho-folk weirdness that claims both SF and LA as ‘home base’ and comes with a revolving door of collaborators including members of Dead Meadow.

Matos and band stirred up some mighty fine psychedelia complete with spooky keys, over-driven wah soaked guitar, and dreamy vocals opining about narcotic sojourns south of the border to Mexico. The ‘early’ trippers responded by freaking out in a good way as the 420 celebration continued in preparation for Dead Meadow.

Speaking of early, I’m intent on getting this review submitted on non-stoner time. You’ll know I was able to stay clear minded and not affected by the 420 temptation by the timeliness of this going to publication….happy 420 everybody!