Crystal Fighters sailed through Mezzanine in San Francisco bringing with them a load of positively charged vibrations which lifted the room and kept the crowd floating on their infectious beats and multiple part harmonies.

The European band, which started in the UK and now calls Spain home base, is one of the better kept secrets in music right now. Given this performance, which kicked off the U.S. leg of their Everything Is My Family tour and the raucous reaction of their fans, this will not be the case for long.

Crystal Fighters play an eclectic brand of pop, rock, folk, and electronica with irresistibly catchy sing along phrases (often nonsensical) spread over the top. To accompany this vibrant musical stew is a stage show that visits the past, present, and future.

Juxtaposing ancient Basque instruments such as the txalaparta (a giant wooden xylophone type instrument) and the txistu (a pipe whistle) against electronic synthesizers and traditional rock instruments, the resulting mix is a swirl of sound that sent the crowd into a mass hypnotic euphoria.

Crystal Fighters set the tone from the beginning, with their stage resembling a jungle setting and incense wafting through the room. It was the perfect backdrop for their brand of psychedelic electronica, and rooted their performance to a respect of all things living, which is the underlying message of their current album Everything is My Family (2016).

Fronted by singer / guitarist Sebastian Pringle, guitarist Graham Dickson, and singers Ellie Fletcher and Laure Stockley, the band took control immediately upon their emergence from backstage. After the spoken ‘Simplecito’ called the band to the stage, the rhythm section of Gilbert Vierich (multi-instrumentalist) and drummer Daniel Bingham (touring in place of original drummer Andrea Marongiu who passed in 2014) suddenly came to life as Crystal Fighters swerved directly into the upbeat ‘Follow.’

The band, all dressed in crisp white garb adorned with hippy regalia, turned the energy up a few notches with ‘Yellow Sun’ which is a can’t miss summer anthem that could easily be the long lost cousin of Michael Franti’s ‘Say Hey,’ which was another summer blockbuster.

Crystal Fighters are in their element when performing live, as they unleash a frenetic gypsy energy onstage, reminiscent of Gogol Bordello. However, where Gogol has more of a punk aesthetic, Crystal Fighters are more entrenched in the mysticism that comes through their ties to Basque folklore and the use of Basque instruments.

This is particularly evident with Pringle, whose stage presence evokes a shamanic feel that resonated with the crowd. Maybe it is the use of unorthodox organic instruments draped over modern electronics, but the sight of Pringle and Vierich facing each other as they beat out natural percussive tones on the txalaparta brought about a tribal component that belies their pop psychedelia.

The ragamuffin artistic slant that Crystal Fighters bring to the stage makes them altogether foreign and familiar, and gives possibility that anything can happen at their show. It is almost like a Sesame Street hootenanny. It would not be out of the question to see Big Bird traipse onstage with Fletcher and Stockely, as the vibrant colors and persona of Crystal Fighters would make such a scene somehow fit.

With that, Crystal Fighters played the sublime ‘Lay Low.’ It is an ode to their lost comrade, original drummer Andrea Marongiu. As the song swelled with the earnest sound of the guitars supporting the brilliant harmonies of Dickson, Pringle, Stockley, and Fletcher, the energy from the stage bubbled out to the audience. Soon the joint was jumping with the good vibrations that Dickson called for….like one big campfire singalong…kind of reminiscent of the old Schoolhouse Ricks song ‘3 is a Magic Number.’

The scene was an amazing example of how music can indeed be uplifting to the point that it compels strangers to hug and sing together. But that is what Crystal Fighters are about, banding together for the greater good, and realizing that everyone is connected and everything matters. This could come across as contrived hippy platitudes, but the group means it and intends to spread these good feelings wherever they perform. 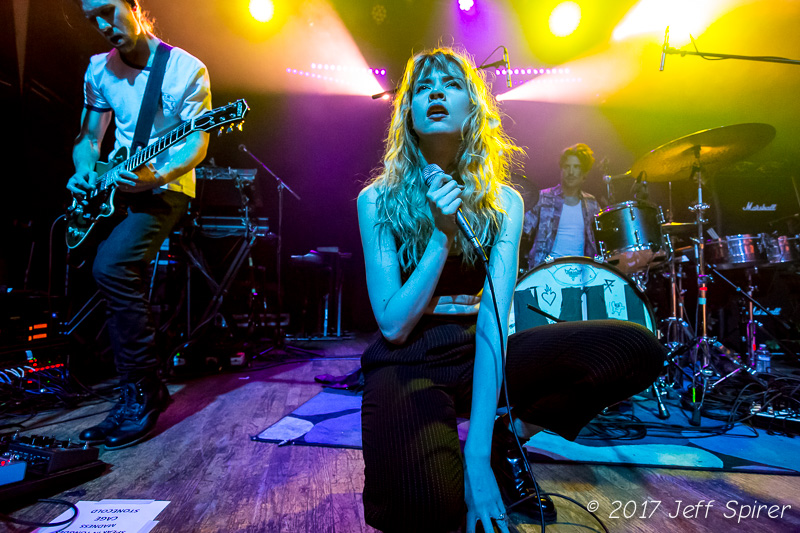 Kicking things off for the evening was Machineheart. This is a relatively new band with synth pop roots, but they rock a bit harder in a live setting. Originally from Seattle, founding members Carman Kubanda and Trevor Kelley re-located to Los Angeles, and are an act to keep an eye on.

Lead vocalist Stevie Scott is a stunning and charismatic figure out front. Her presence commands the stage, and her voice (which evokes a bit of Katy Perry) is actually a nice fit over the driving alternative sounds of the band.

Machineheart is polished, and seems poised for commercial appeal. The band is tight, and along with the mesmerizing Scott out front, drummer Harrison Allen stood out during this performance. The hauntingly catchy single ‘Stone Cold’ closed the set and had the crowd moving before Machineheart disappeared offstage and into the night.

Setlist: Simplecito | Follow | Yellow Sun | LA Calling | In Your Arms | Love Is All I Got

For more information about Crystal Fighters, check out their website.

Find out more about Machineheart here.