It was a chill evening at The Fox Theater in Oakland on a Wednesday night as Australian singer and wickedly acute songwriter, Courtney Barnett, and American musician/singer/songwriter Kurt Vile shared their recent collaboration with Bay Area fans. Their new release, Lotta Sea Lice, which was released on the 13th of this month, is generally a laid back easy ride and reflects much of Wednesday night’s performance. The duo performed with their band The Sea Lice, comprising Janet Weiss on drums, Rob Laakso on bass, and Katie Harkin on keyboards. 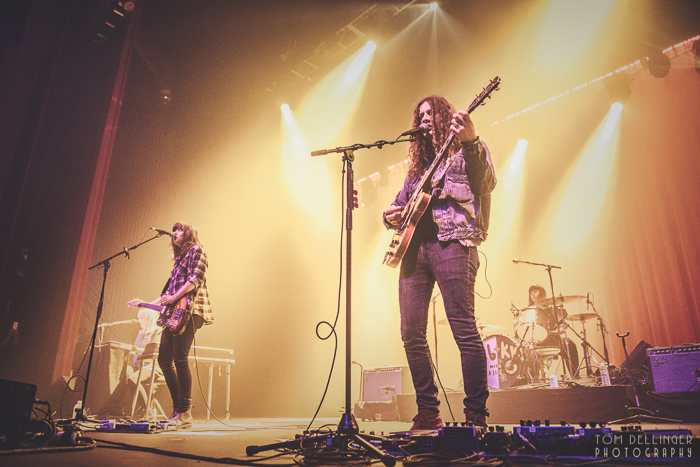 Drawing heavily from their new release, the pair also pulled in a few from their own catalogs as well as a couple outside of that with Belly’s “Untogether” and Gllian Welch’s “Elvis Presley Blues.” Though the material from Lotta Sea Lice is enjoyable in general, there are some tracks that stand out, such as “Over Everything,” with which they opened, and a real gem written by their opening artist Jen Cloher, “Fear is Like a Forest.” Also drawing from earlier work from both Barnett and Vile, some excellent grooves were delivered via Vile’s “Life Like This” and “Pretty Pimpin’ “as well as with Barnett’s “Depreston” and a solid memorable peak with “Avant Gardener.”

Opening was fellow Australian artist, Jen Cloher with whom Barnett has also collaborated in the past. A search of her music on YouTube reveals her to be a formidable writer and performer and though she often appears with a band, on this tour she’s playing a solo acoustic set. A set of originals that made getting to the Fox early a rewarding experience.

Check out this slideshow of photos of Kurt Vile and Courtney Barnett by Tom Dellinger:

Find out more about Courtney Barnett and Kurt Vile here.