All photos by Elizabeth Gohr except where noted.

Over three days, thousands flocked to the Civic Center Plaza for the very first Colossal Clusterfest from Superfly, the people that put on the annual Outside Lands Music Festival, and Comedy Central. The lineup sported some of the best-known comedians around including Bill Burr, Sarah Silverman, Kevin Hart, and Jerry Seinfeld. 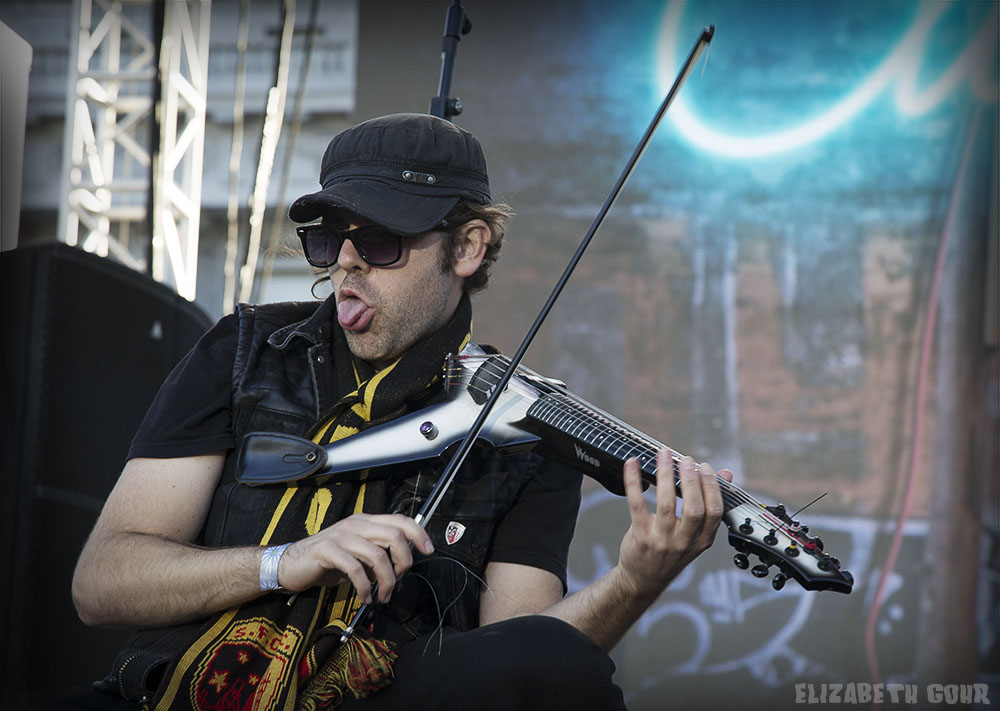 Along with a weekend of laughs, Clusterfest invited a handful of bands, musicians, and even comedic musicians! Here is SF Sonic’s coverage of the biggest headliners we saw over the weekend. 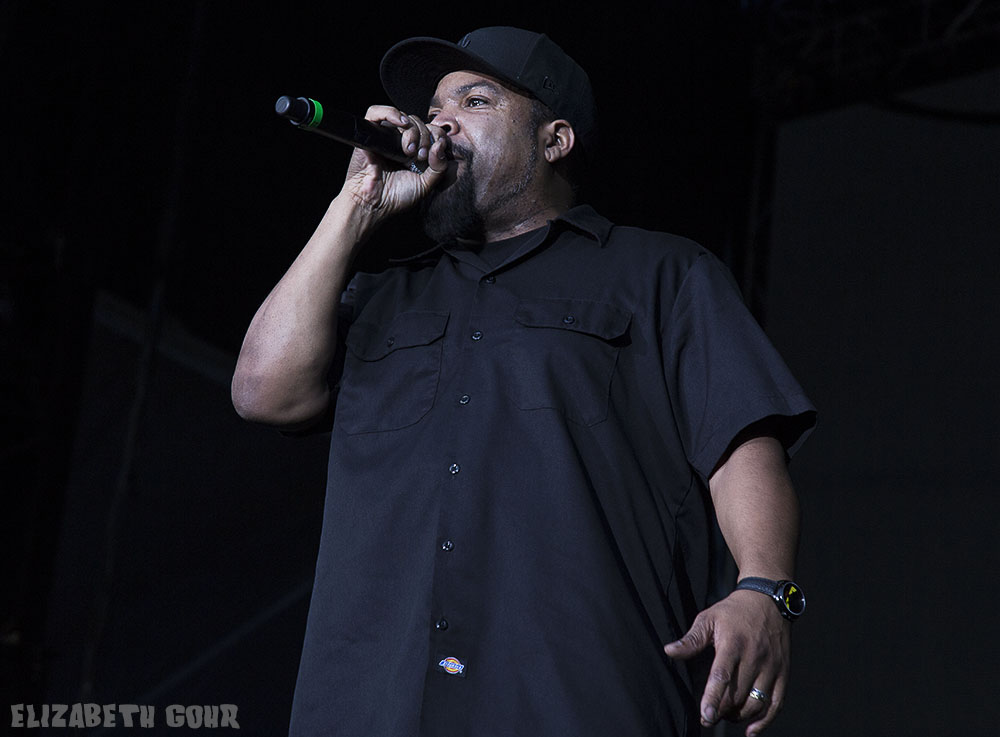 O’Shea Jackson, or as better known, Ice Cube, is no stranger to comedy. The California rapper has starred in the some of the funniest films of the 90s and onwards including Friday, Barbershop, and both 21 Jump Street movies. Hey, even some parts of Are We There Yet was funny as hell. I admit it. 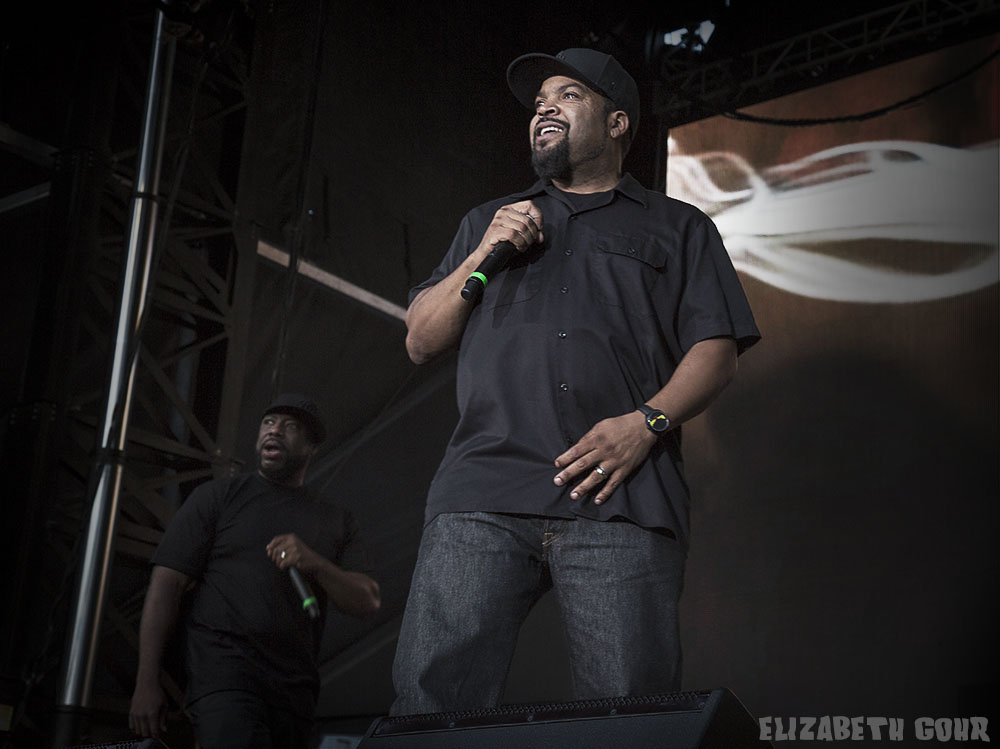 Cube was a walking hit machine on stage. Dressed in all black, he expertly maneuvered through “Check Yo’ Self,” “Bow Down,” and probably the greatest motivational hip-hop anthem, “It Was a Good Day.” Sure enough, the crowd was head-bobbing whenever Cube would throw down a classic. 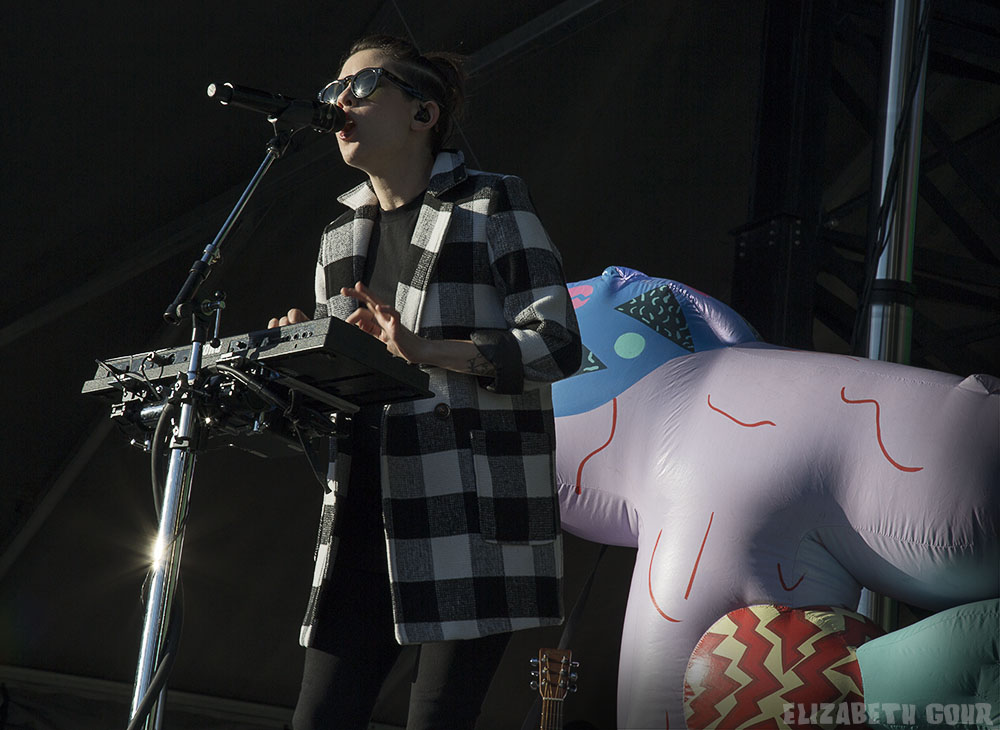 Twin sister duo Tegan and Sara gave Clusterfest a shot of indie and synth pop on the final day. The set started a bit bumpy, with Sara’s microphone not working for the first half of “Back In Your Head,” although it was a blessing in disguise for Tegan. She admitted she didn’t really know the lyrics. Then the duo carried on for the rest of the set. 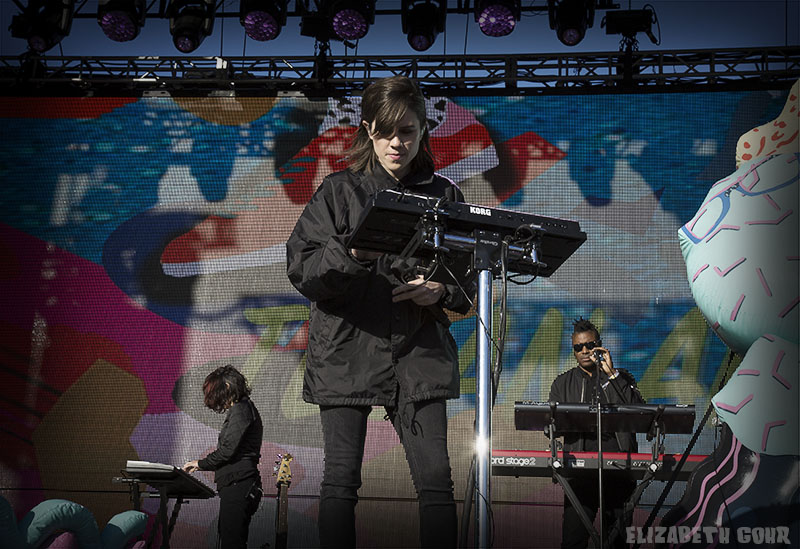 Tegan and Sara have a huge vault of great songs spanning back to 1999, so the sister dream team had no problem digging through their best stuff for the weekend. The bubble gum song “Alligator” was sweetly sung, while the stomping “Nineteen” was fun to jump to. The group dished out some material from their last record, Loved You to Death including “Boyfriend,” “U-turn,” and “Stop Desire.” Of course, the two closed with “Closer,” their awesome, feel-good synth pop gem. 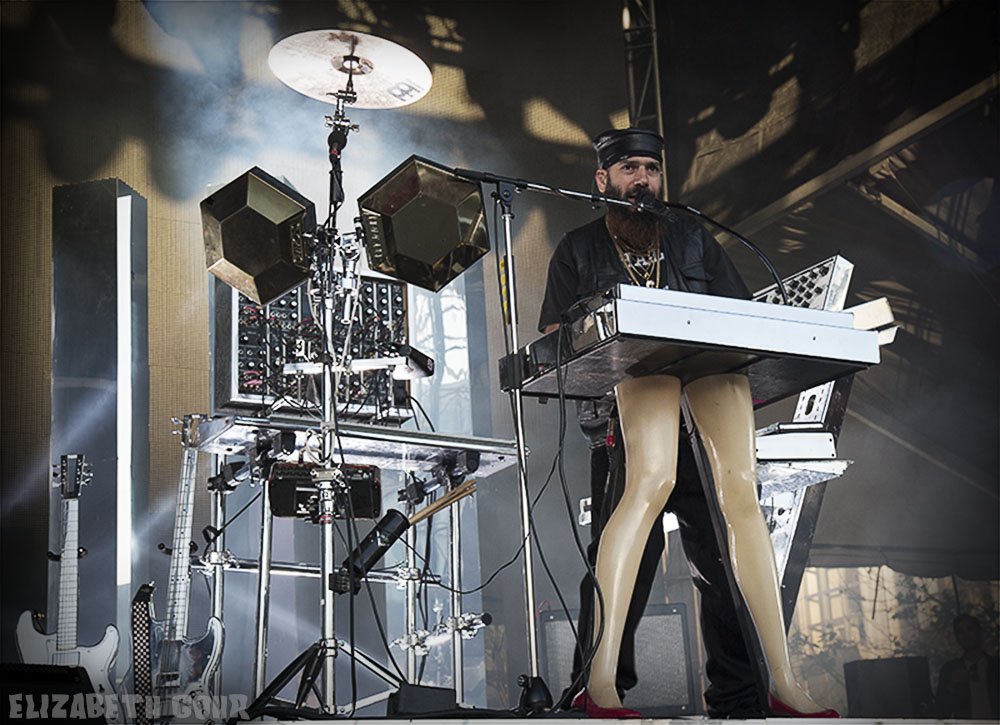 The electro-funk duo once called themselves “the only successful Arab/Jewish partnership since the dawn of human culture,” jokingly. However, the title might still stand. After a roar of cheering, the crowd at Clusterfest was endlessly groovin’ to “Sexy Socialite,” “Over Your Shoulder,” and “Jealous (Ain’t With It)” although my favorite had to be the two dishing out “Bonafide Lovin.” 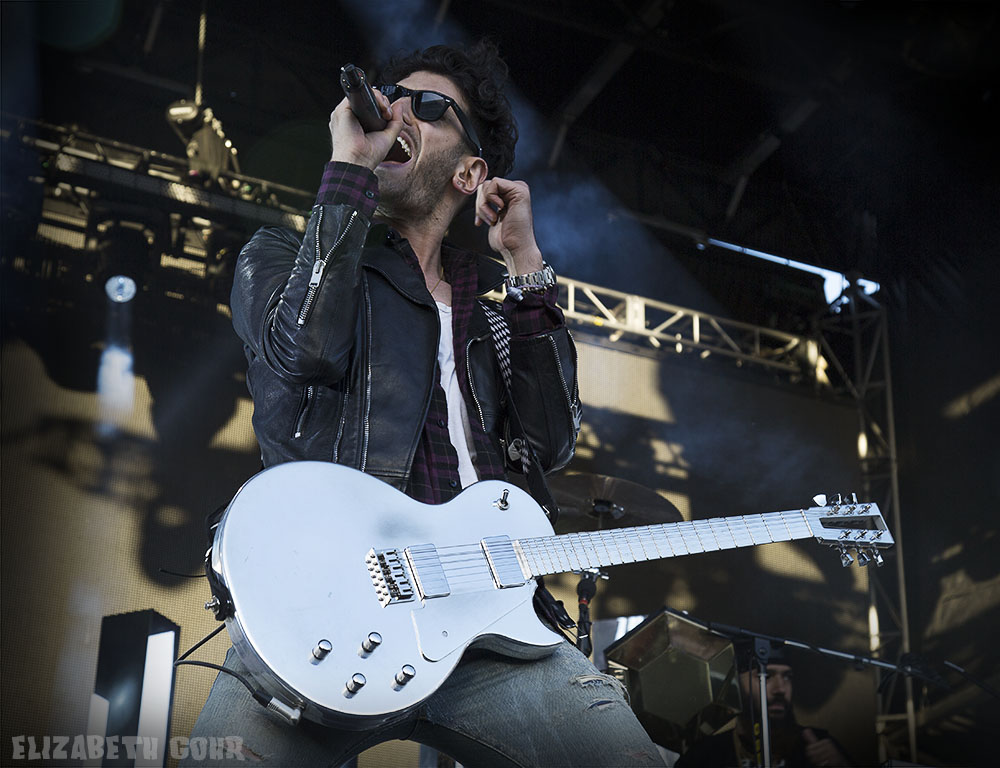 The stage was like a retro-futuristic disco club. David Macklovitch (Dave 1) and Patrick Gemayel (P-Thugg) played reflective instruments that shined bright like diamonds in the setting sun.

Alright, I know. Hannibal Buress is not a musician. Though look up “Morpheus Buress” on YouTube and you won’t regret it. Trust me. 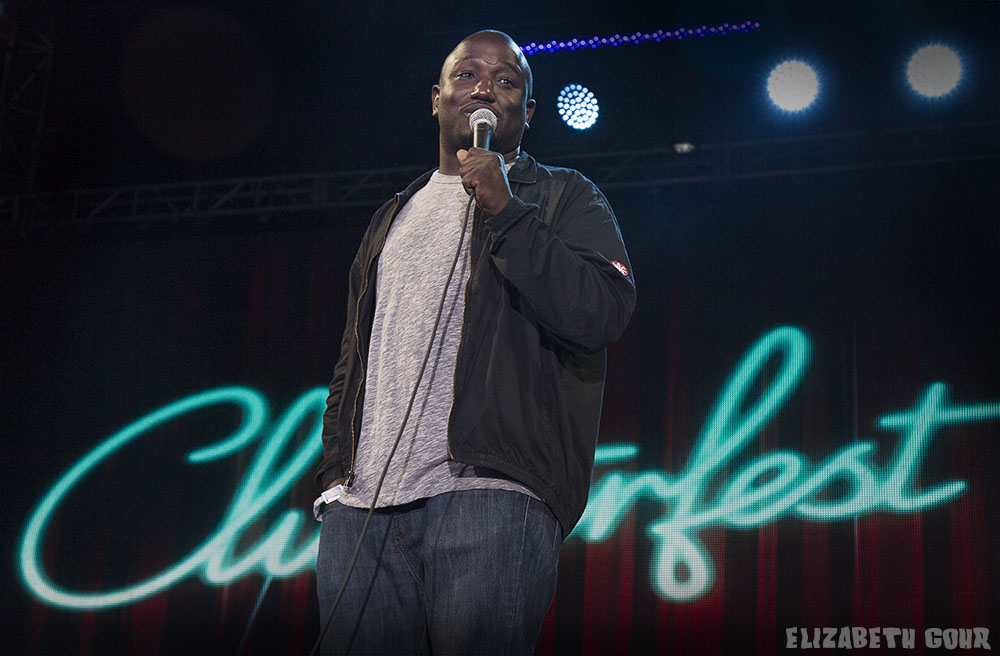 Buress had a headlining show at the Bill Graham Auditorium on Sunday. He had an explosive set about his Tinder matches and an unfortunate Uber experience. During the end of his set, a DJ slipped onto the stage and Buress invited a gang of ballet dancers followed by the comedian garbling rap verses to hilariously cheap sounding trap music. Buress even threw down an a capella version of his “rap” song while the dancers awkwardly bounced behind him. Nonetheless, the comedian still mumbled through the song, constantly dropping “kill a bitch” and “chicken dick.” The audience was howling in laughter. 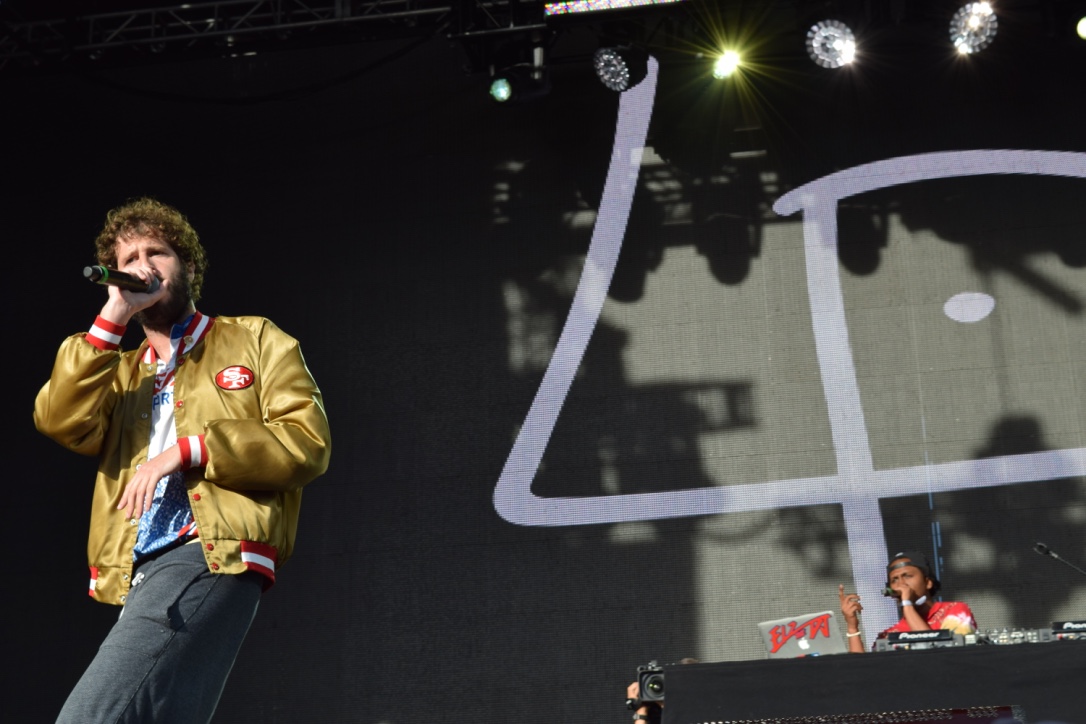 Pennsylvania comedian/rapper David Burd (Lil Dicky) was one of the first musicians on Day One of Clusterfest. Dicky has penned some of the biggest viral videos of the past year. His “$ave Dat Money” video with Fetty Wap and Rich Homie Quan has gathered 75.3 million hits and counting on YouTube. The great Snoop Dogg has shared a track with Dicky as well on “Professional Rapper.” The two songs were performed live at Clusterfest, along with “Molly,” “Pillow Talking,” and “Work (Paid For That?).” 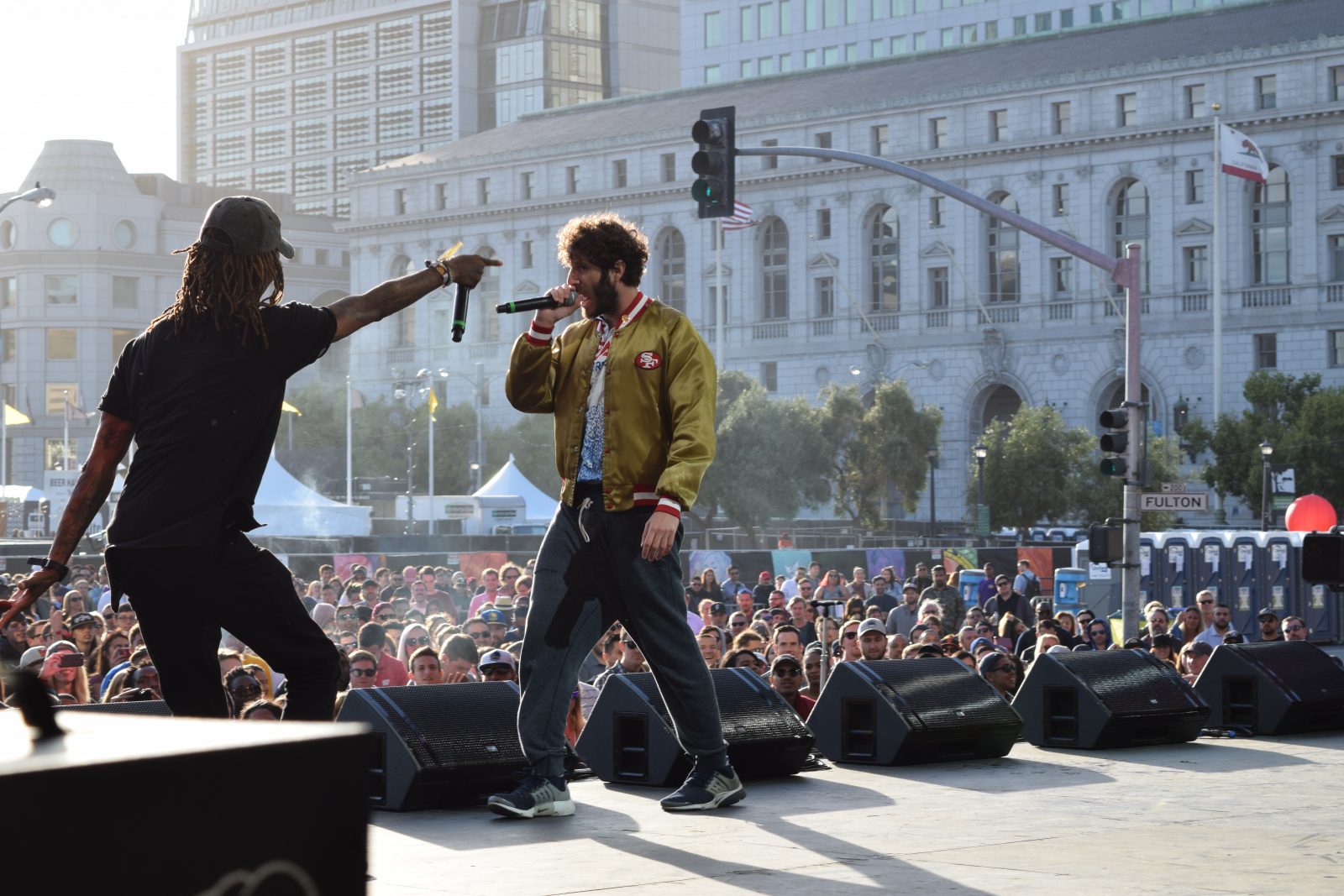 Dicky randomly selected a girl in the crowd and pulled her onto the stage for a hilariously awkward lap dance. Luckily, she was OK with it…

The former SNL comedian and musician started his set with some good-old-fashioned cringe humor. A lot of unsure laughs were exchanged after Armisen expressed his astonishment over the existence of doo-wop music. “Someone made this! How crazy is that?,” he wondered.

He also claimed that no one likes jazz and that everyone’s mind trails off after 30 seconds of listening to the genre. Armisen played some tacky lounge jazz over the speakers and asked the audience to raise their hands once they stopped paying attention. It took about less than a second for some to do it. 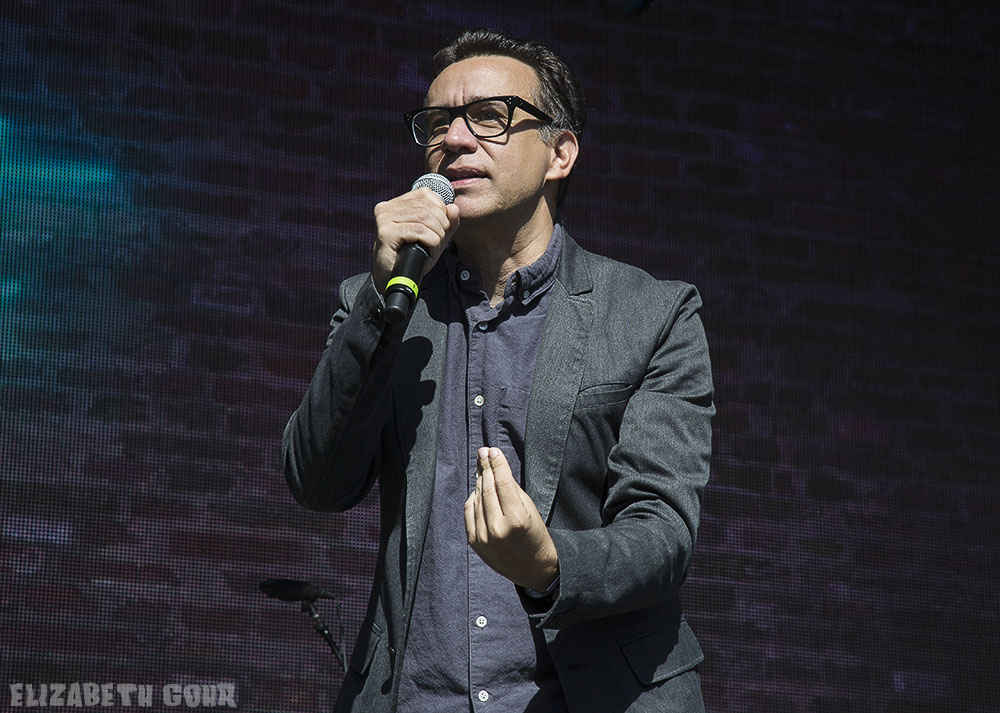 Armisen picked up a guitar during the second half of his set to cover an Ian Rubbish and the Bizarros song, his fake Sex Pistols parody band. I’m not sure if Armisen meant for this to happen, but during “Hey Policeman” the audience was quietly watching and when prompted to sing-along, many sung out of pity. However, we had to remind ourselves that we were all at a comedy festival, and Armisen knew what he was doing.

After two other numbers from a couple more parody bands, the Blue Jean Committee and The Bjelland Brothers, Armisen gave us a sneak peak of a new episode of Portlandia. 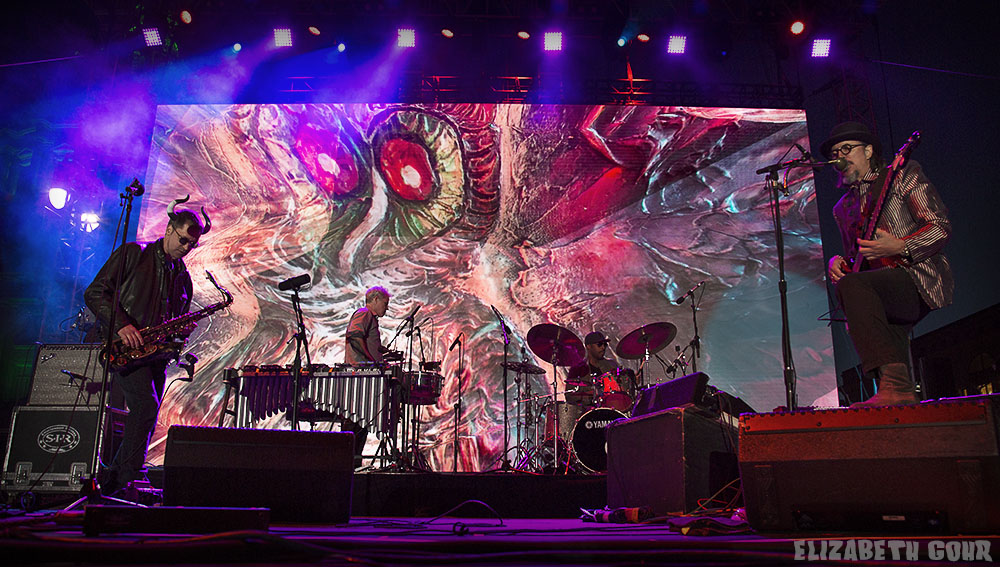 The legendary bassist Les Claypool was one of the most impressive musicians of the festival. For an hour straight, Claypool’s fingers ran at a million miles an hour while he jammed through a couple Primus songs, “Tommy the Cat” and “The Toys Go Winding Down.” Some of Claypool’s own solo songs were performed like the creepy “Mr. Wright” and the sticky, fuzzed out trip that is “Whamola” that turned into the South Park theme. 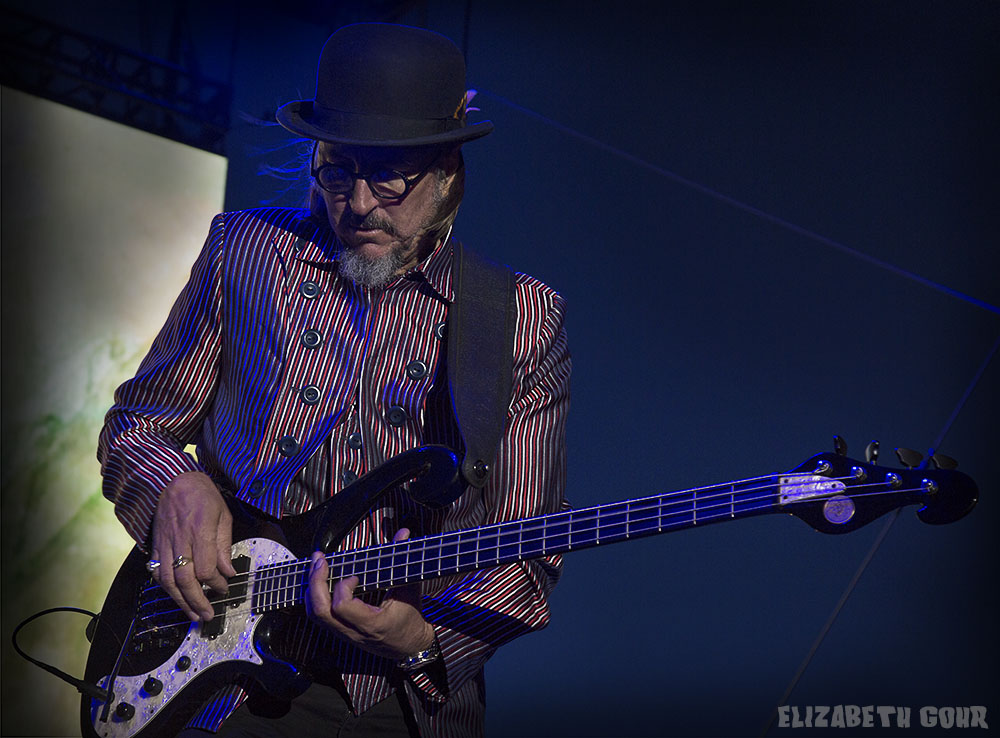 For the closer, “D’s Diner,” Fred Armisen and singer Gabby La La joined on stage with Claypool and the band. It was one of the best moments of the weekend. 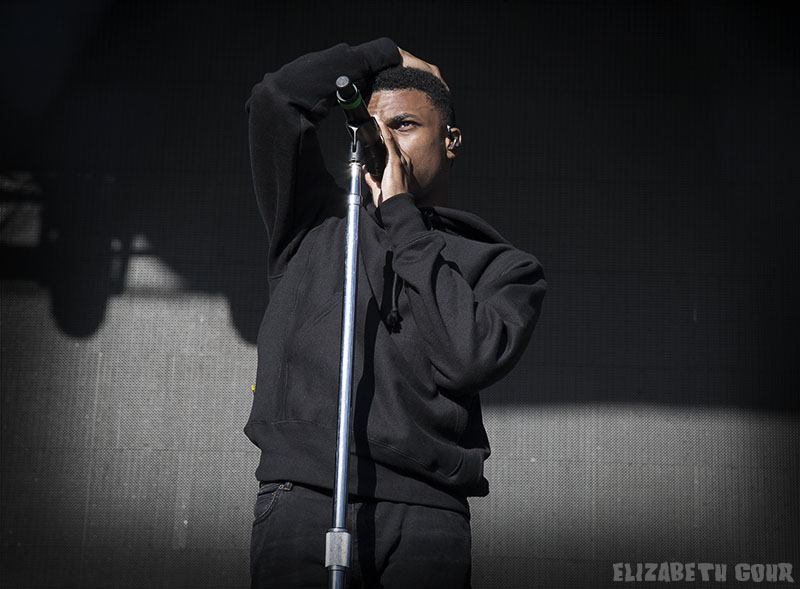 The 23-year-old rapper is young, but he already has a handful of critically praised projects under his belt. Vince Staples’ nasally verses blasted over huge speakers on Saturday. Equipped with a DJ and some aquatic themed visuals, Staples kept on brand with his upcoming Big Fish Theory album. Stock videos of 50s surfers stood tall behind the rapper, as Staples performed his best songs. 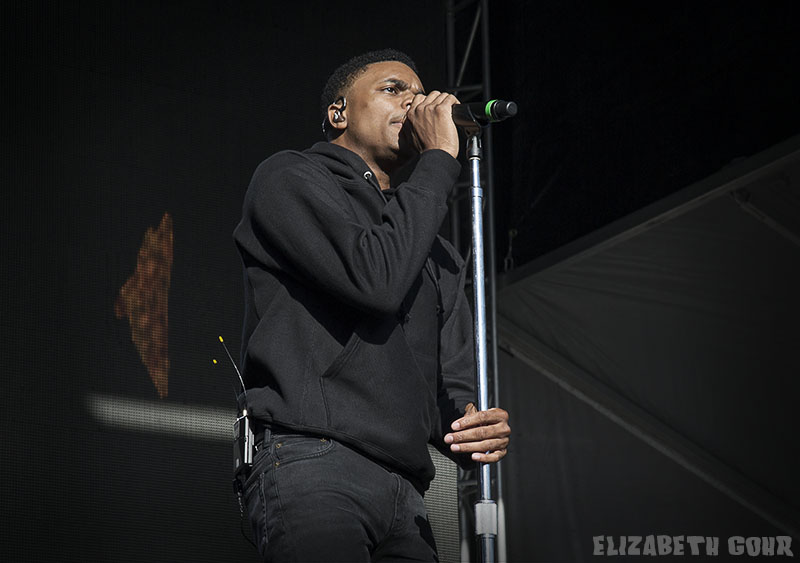 “Norf Norf” was stripped back to its barest bones and the piercing squeal of “Blue Suede” imploded with belly shaking bass. Last year’s claustrophobic “Big Time” appeared back to back with Flume’s “Smoke & Retribution,” a song in which Staples appeared in.

So Many Musicians, So Little Time 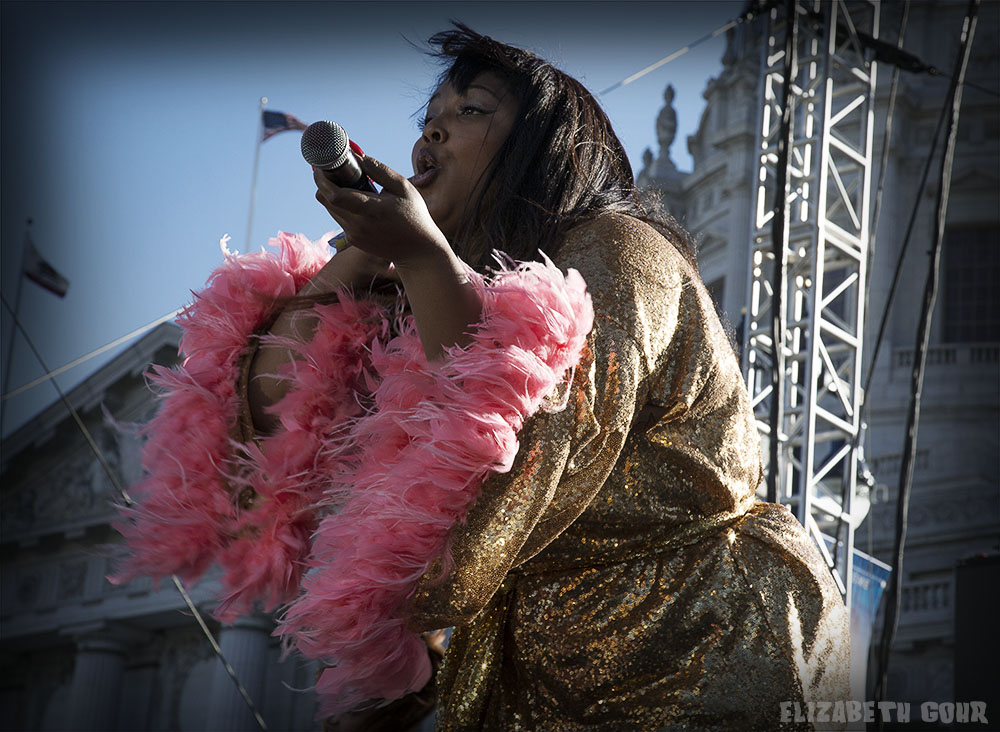 Not only were the headliners the highlights of Clusterfest. Pop singer and rapper Lizzo with backup dancers kept the party going. Preservation Jazz Hall Band was so good they were the only band to play the festival twice. On Friday and Saturday, the brass ensemble played with intensity that oozed cool. Comedian Rachel Bloom powered through 10 originals, most that appeared on Crazy Ex-Girlfriend.

Vocalist Jidenna, who sings over hybrids of 50s Motown R&B songs and contemporary rap beats made an appearance. Three drag queen singers – Alaska Thunderfuck, Bob the Drag Queen, and Ginger Minj – were fierce as hell. On the other side of the coin, Ty Segall welded a garage rock hammer to kick things off on Friday. 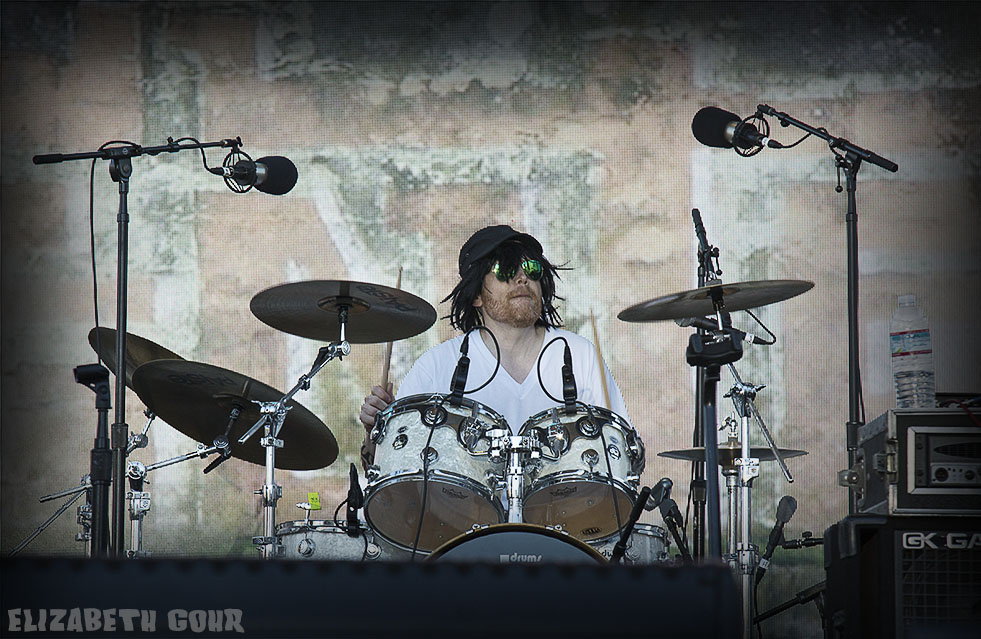 The Goddamn Comedy Jam with Josh Adam Meyers featured comedians Bill Burr, Michelle Buteau, Pete Davidson, and Big Jay Oakerson. They all came up to the mic to cover their favorite hits from Whitesnake, House of Pain, and Mötley Crüe. The latter had Bill Burr in the worst Tommy Lee costume of all time according to Meyers.

People grooved to Escort and others danced to Great Good Fine Ok and Madaila. 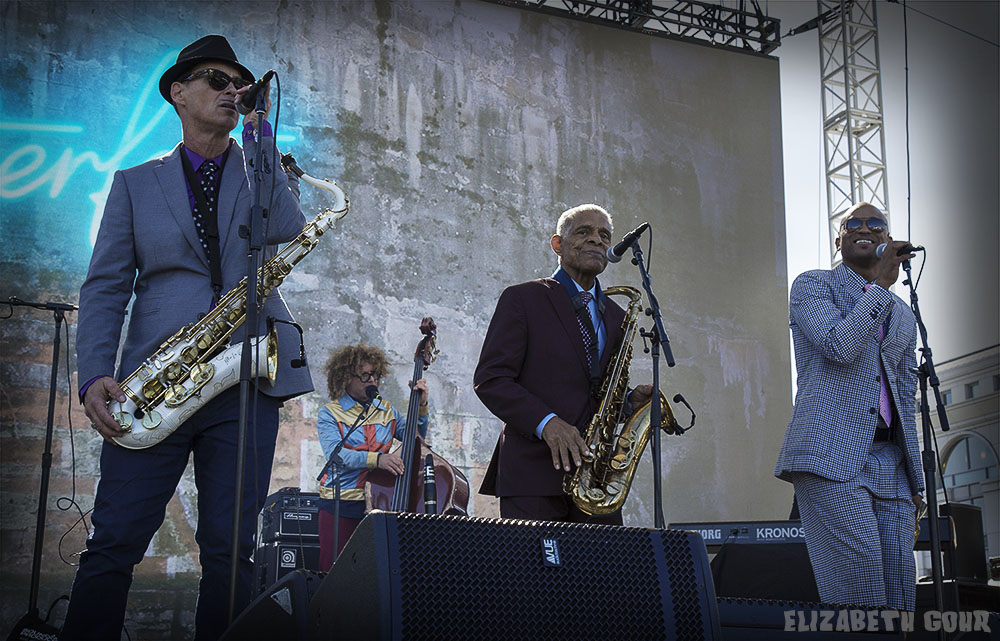 The music at Clusterfest was the first step in a festival that will hopefully become its own annual tradition. Hugh comedians and musicians were adored by all over the weekend. Here’s to more Clusterfests everyone! Is it too early to wish for a Tenacious D appearance next year?