With seven self-produced albums to his credit, singer, multi-instrumentalist and vibe architect, Scott Woodruff and his band Stick Figure brought their laid back, euphoric brand of dub step reggae to the stage of Oakland’s Fox Theater. The Above the Storm tour also featured supporting acts Twiddle, and LA based Iya Terra, all three bands with their own unique twist on the island sound. This bill was an intense mirage of sound that begged for a three hour long hip swagger. 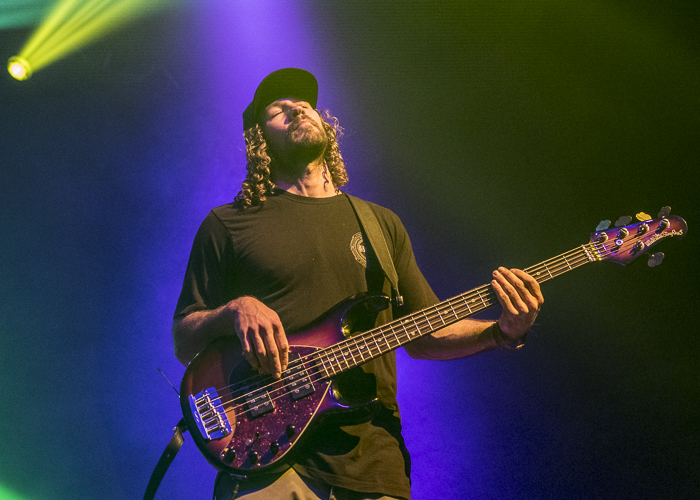 Woodruff’s Stick Figure band consists of himself as vocalist, producer and guitarist, Cocoa the dog, keyboardist KBong, drummer Kevin Offitzer, bassist Tommy Suliman, and keyboardist, backup vocalist, and guitarist Johnny Cosmic. A longtime friend of Woodruff’s, TJ O’Neill, also appears live along on a few of his most popular songs, “The Weight of Sound” and “The Choice is Yours.” 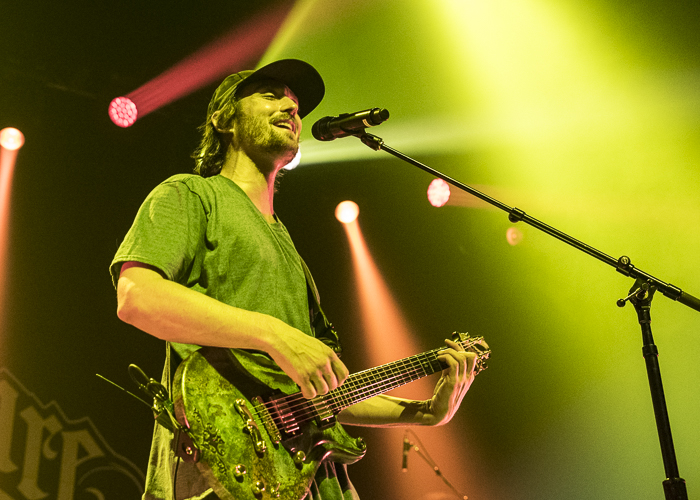 Further drawing on the loving and positive energy for this event, a sweet, friendly Australian Shepherd pup named Cocoa chilled on stage for Stick Figure’s set. This pup was so accustomed to life on the stage, she thought nothing of visiting security staff and photographers in the pit from the stage for random pet sessions prior to and during Stick Figure’s set. Cocoa spent most of her time during the set relaxing at the bare feet of bassist Tommy Suliman. Tommy also happens to be Cocoa’s part time bunkmate while on tour, but Cocoa resides fulltime with Scott Woodruff and the Mrs. in the Santa Cruz mountains. 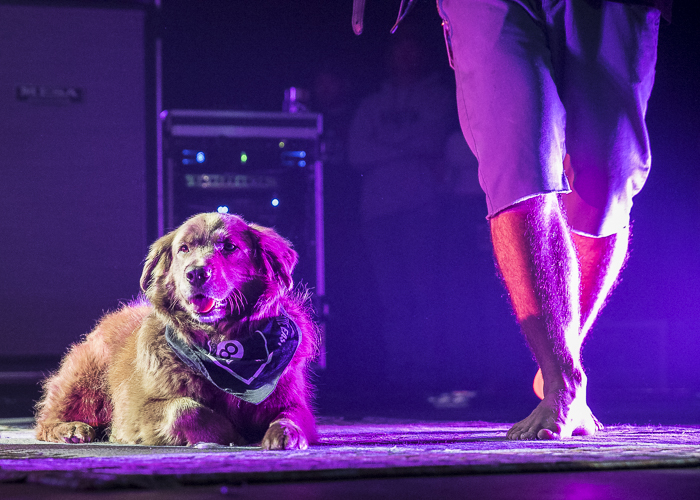 Cocoa’s story is a beautiful one, and extremely worthy of mention given her presence on the Stick Figure stage. Woodruff’s previous canine partner passed away after a vicious coyote attack and he was looking for another companion to fill the horrific void after his dog Holly’s untimely passing. Woodruff stumbled upon a rescue on his search, a six month old Australian Shepherd found wandering in rural Merced County in the Central Valley, and called to see about adoption. His calls went unreturned. Granted, he was living in San Diego at the time, and it would be a bit of a trek to pick this pup up. After months of calling with little to no response, Cocoa was transferred to the San Francisco SPCA and came up for adoption. He jumped on it and was at the top of her waiting list, calling every three days until they finally agreed to release her to him. It was a match made in heaven. Cocoa was automatically comfortable on stage. She has been touring with the band ever since that first tour in 2013 with Tribal Seeds. 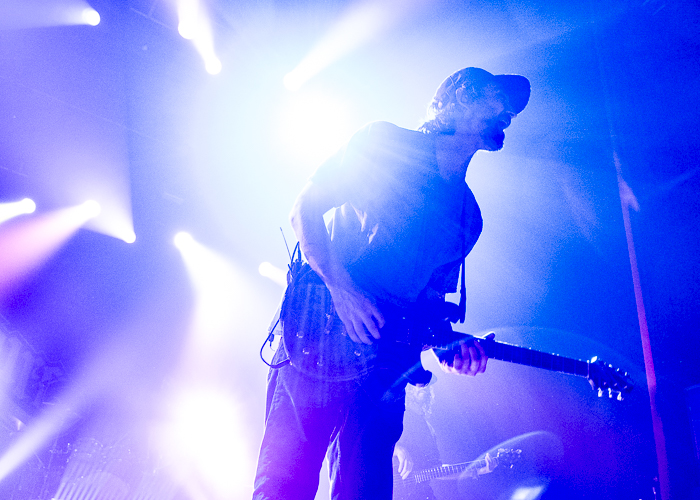 Stick Figure’s set in Oakland ranged from every popular dub hit Scott has recorded alongside some ever popular reggae favorites; his “Fire On the Horizon,” “Smokin Love (featuring Collie Buddz),” and “Sound of the Sea” being Stick Figure favorites, they also played Bob Marley’s “Sun is Shining” which had everyone in the audience singing along. 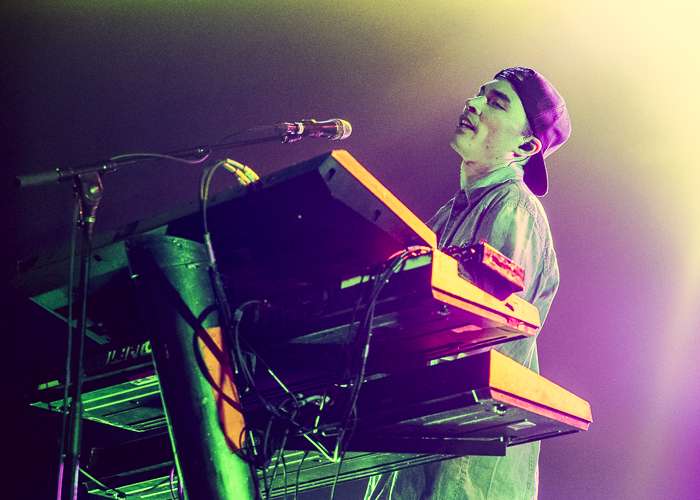 A good majority of the intrinsic, catchy tunes performed in Stick Figure’s set hailed from the album Set in Stone, released in 2015. The deep roots of this band were brought forth with every song, as most of them were originally recorded by Woodruff solo on every instrument and brought to life by his talented band mates for touring. Set in Stone was Woodruff’s first recording with the whole band, and has proven to be his most popular. 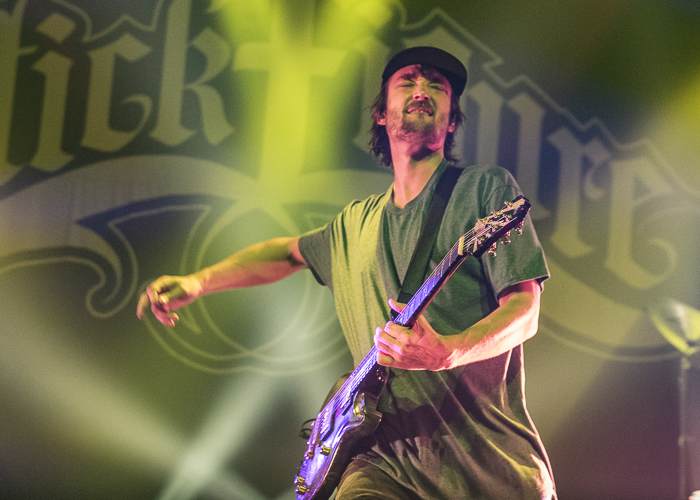 Halfway through the Stick Figure set, a dual percussion jam brought the audience to its dancing knees, a further testament to the exquisite musicianship of this bill. 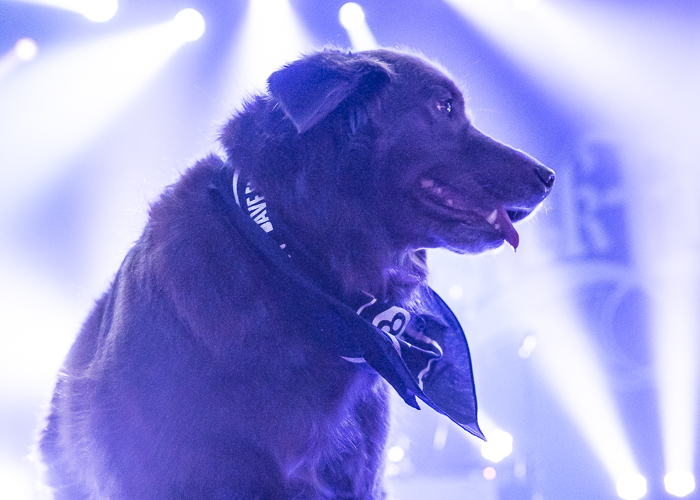 Stick Figure has released two songs from an up and coming album, “Above the Storm” and “Easy Runaway.” The aptly named Above the Storm album is set to release sometime in 2018.

The band Twiddle (from Vermont) also shared a very special musical journey with their audience this night, bringing a special emotionality to everyone within their reaching sound. Twiddle brought multiple types of music to their jam; Jazz, Blues, Funk, Reggae, and Rock. Experiencing their set was like watching your favorite Pink Floyd memory, complete with incredible lighting, instrumental improve, and deep jam sessions. It’s fairly rare that one experiences a band in a personal sense, but it was clear from the audience’s response that this band has what it takes to reach down to the heart of every audience member and connect in a very special way. Emotions ranging from sadness to extreme gratitude weren’t uncommon feelings during their incredible set. I get the feeling that this band gives their all for each performance, and it shows. They tour on the festival circuit extensively, and garner most of their praise for their live performances.

While only a few tracks from Stick Figure’s up and coming album Above The Storm have been released, it has become a much anticipated follow up to the Set in Stone album which was the first album released with accompanying musicians. All of Woodruff’s prior albums comprise his blend of incredible musicianship, but it was Set in Stone that truly set his world afire, topping the reggae charts.

For more information about Stick Figure, check out this website.

Find out more about Twiddle here.