Burger Boogaloo, Oakland’s punk rock in the park festival, returned last weekend for its 9th year. Featuring headliners Devo and The Damned, this year’s lineup was rounded out by grunge pioneers Mudhoney, local punk and garage bands, and eccentric outfits from across the country and as far away as Italy and Japan. Many of the bands on the lineup reunited just for Boogaloo, like Devo and The Spits, while others, like Pookie and the Poodlez and Le Shok, played their farewell show. 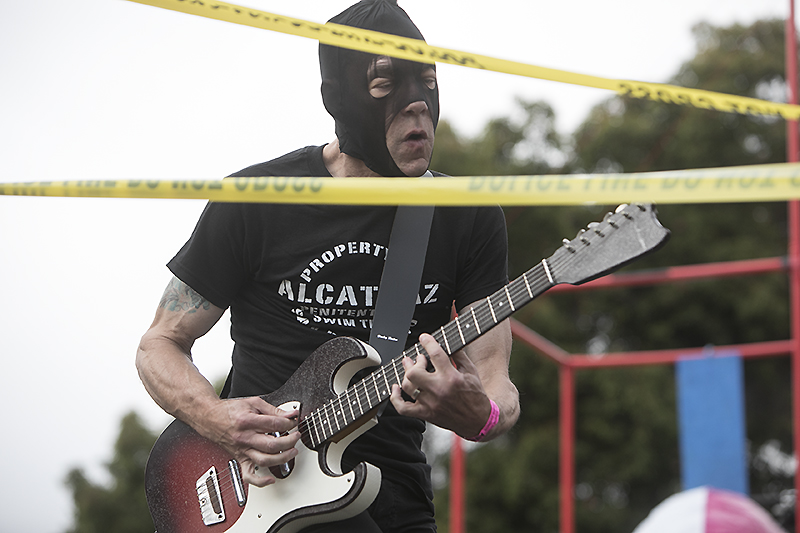 As usual, the incomparable John Waters hosted, and as usual, his perfectly and hilariously crafted band introductions were one of the supreme highlights of Boogaloo. His diatribe against Trump, woven into his flawless introduction of Devo, was priceless: “Trump is a feckless prick. A shithole of a president. An orange anus, as Rosie O’Donnell called him, who kidnaps children [and]tosses paper towels to hurricane victims. He’s so dumb he stares at the eclipse with that stupid wife who’s a clueless dresser who no drag queen would ever imitate.” But despite the camaraderie inherent in shared anti-Trump sentiment, and while overall Burger Boogaloo was a fun weekend, some aspects were somewhat disenchanting. 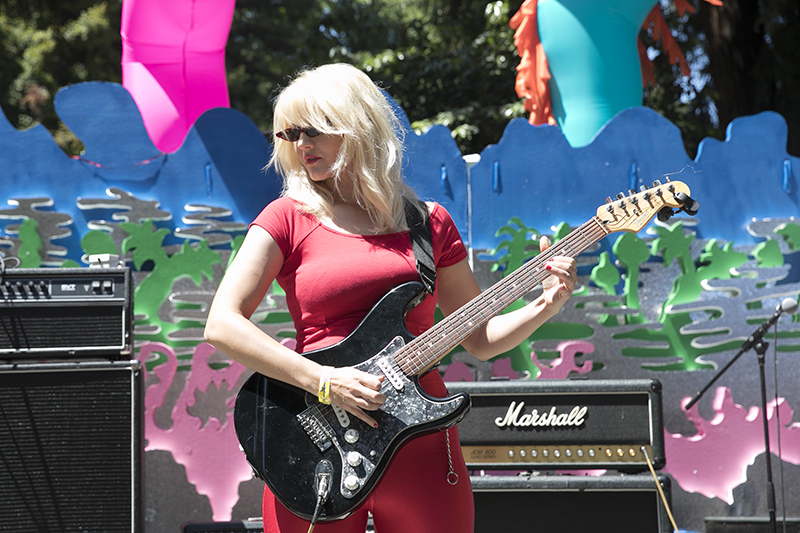 It was simply impossible to ignore the glaring lack of representation at the festival. Its stark homogeneity, despite being held in one of the most ethnically diverse cities in the world, was so shocking, in fact, that Le Shok addressed it directly during their set. The bassist likened the audience to San Francisco’s yuppie Marina neighborhood – “Or is this Oakland Hills?” he jabbed. “Either way, Too Short’s not here and I’m a little bit fuckin’ disappointed,” the singer added. 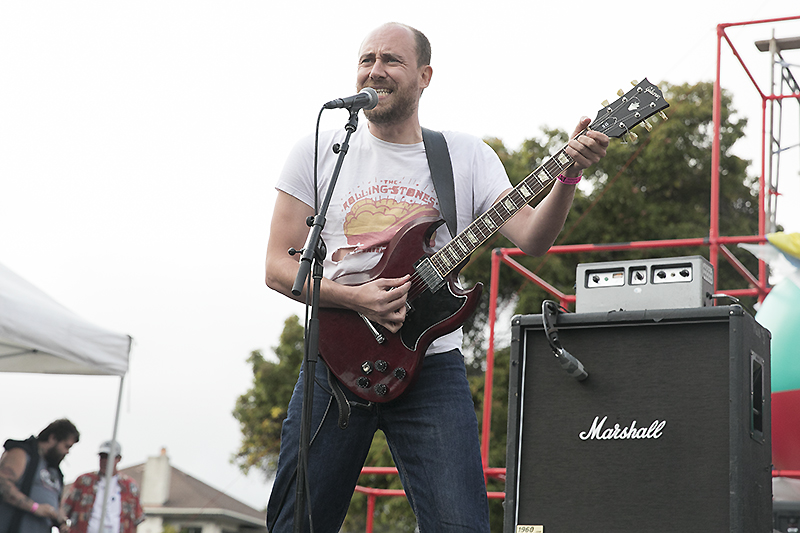 And it’s true: for a festival of several thousand that takes place in the ‘hood at Mosswood Park – where street parking is often shared with sleeping bags and cardboard boxes, and where the city had to remove a homeless encampment just to make space for the event – there were almost zero people of color present. There was not a single African American ever on stage (although Italy’s export Giuda features a singer that appears to be of African and Italian descent). And it isn’t because there aren’t any punks of color around – Oakland is home to enough black and brown punk bands to keep audiences entertained for a full four days during POC punk fest The Universe is Lit, and that’s not even the only such punk fest in town. 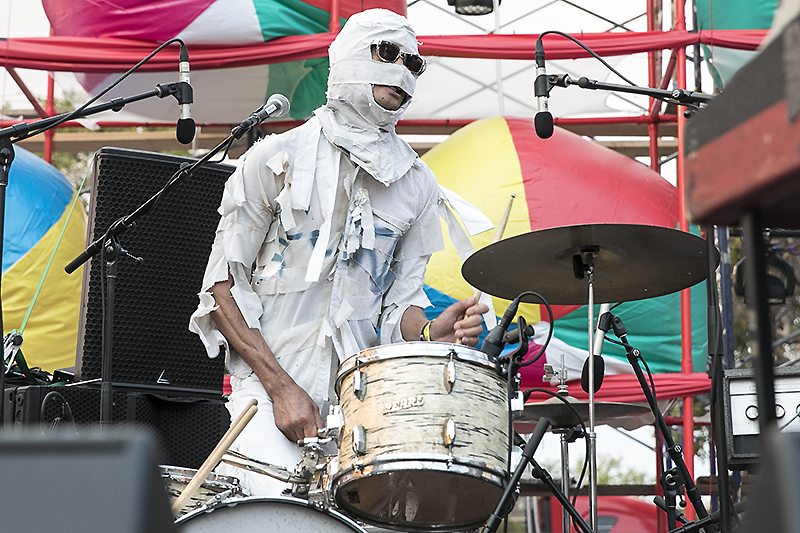 The fact that there were only two people of color from Oakland on the lineup (Battleship and Francis Lau) – of only three POC from the entire United States to play at the festival (minus one momentary guest musician) – seemed at odds with the fact that it’s 2018. Only two of the 22 acts were all-female bands (NOTS and The Flytraps) and though four more featured women, only one – Subsonics’ drummer Buffi Aguero – was of color. Except for Japan’s Firestarter – a festival highlight, to be sure – there were no bands of color on the lineup. At a punk festival. In Oakland. 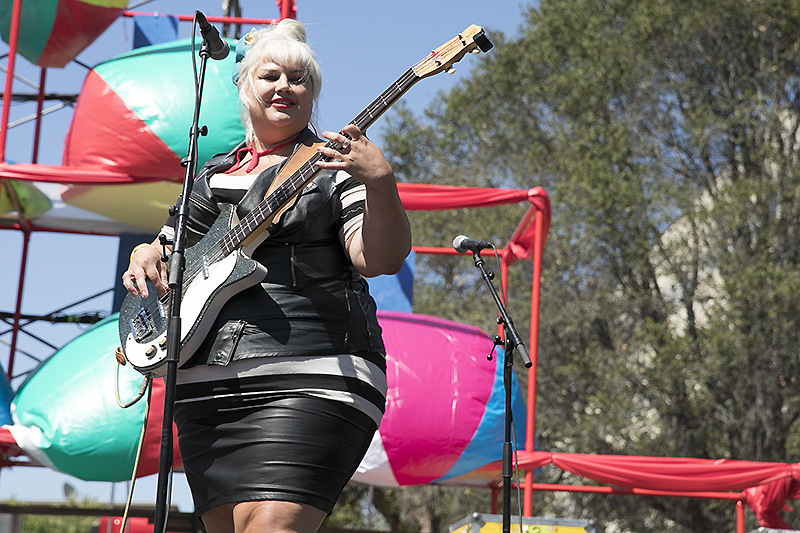 Nevertheless, Burger Boogaloo is home to a friendly crowd and a memorable, unpretentious collection of really far-out, avant-garde bands you’re just not likely to see anywhere else. 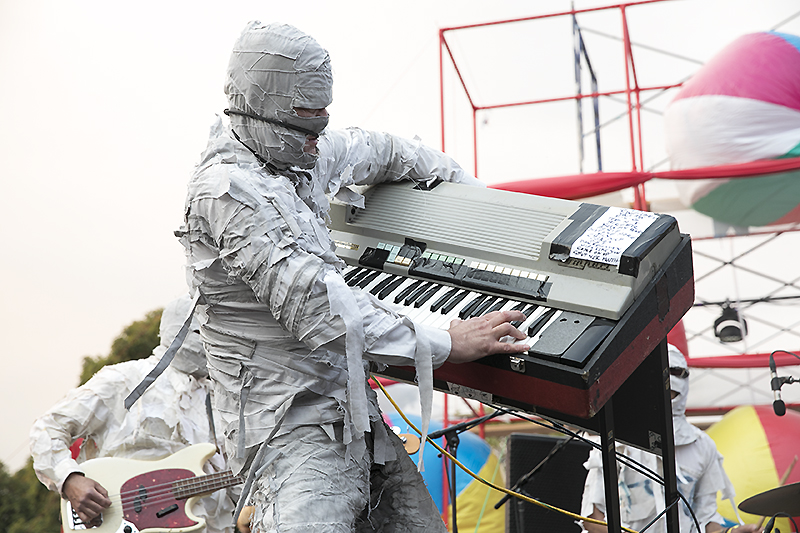 Hunx and His Punx 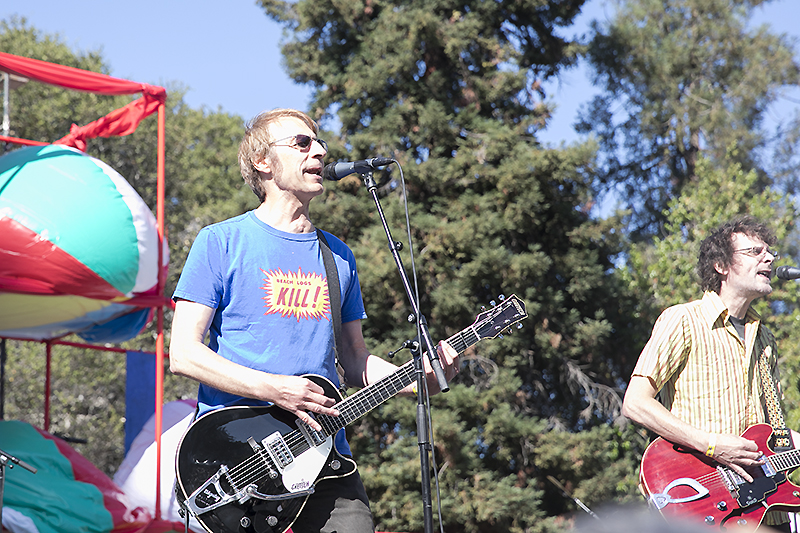 An early highlight was Hunx and His Punx, who kept the laughs flowing with their queer-centric ’50s bubblegum punk about the tender perils of young love. Featuring quick and cutesy songs that mostly lasted from four bars to one minute, the band endeared themselves to the crowd the instant singer Hunx strutted out on stage confirming what John Waters’ introduction hinted at: “I did sleep with Pee-Wee Herman,” he admitted slyly as he slinked closer to the mic, wearing a DIY shirt that had “100% FRUIT” emblazoned across it and comically revealing leggings. “And Fred Schneider, too… I hope you’re getting this,” he coquetted to the photographers, extending his pelvis in a gyrating motion toward their lenses. 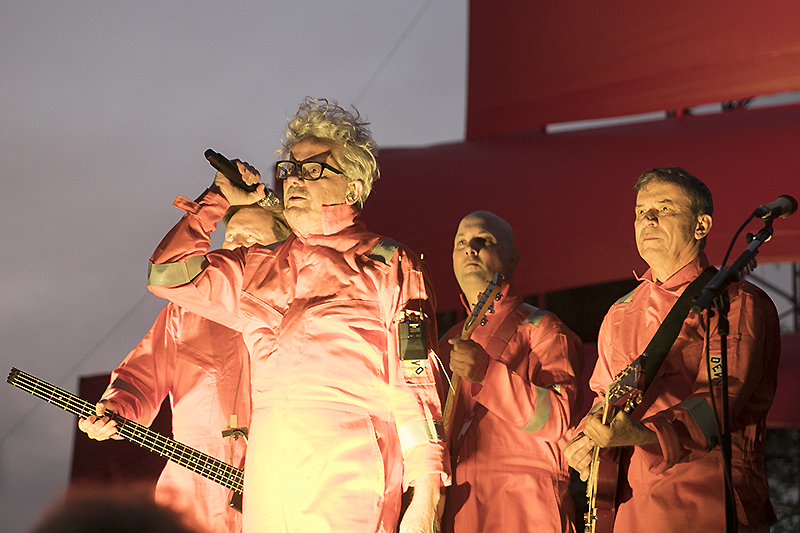 In fact, despite the contributions and vintage aesthetic of the rest of the band – Shannon Shaw from Shannon and the Clams played bass and beguiled the audience with her powerful back-up vocals, and she and drummer Erin Emslie rocked hairstyles pleasingly reminiscent of the B-52s; not to mention their male guitarist named Lana Del Ray who looked like he was lipsticked by the Joker – Hunx’s between-song banter was the main attraction. He is a natural born entertainer, hilarious, cute and charming as fuck. 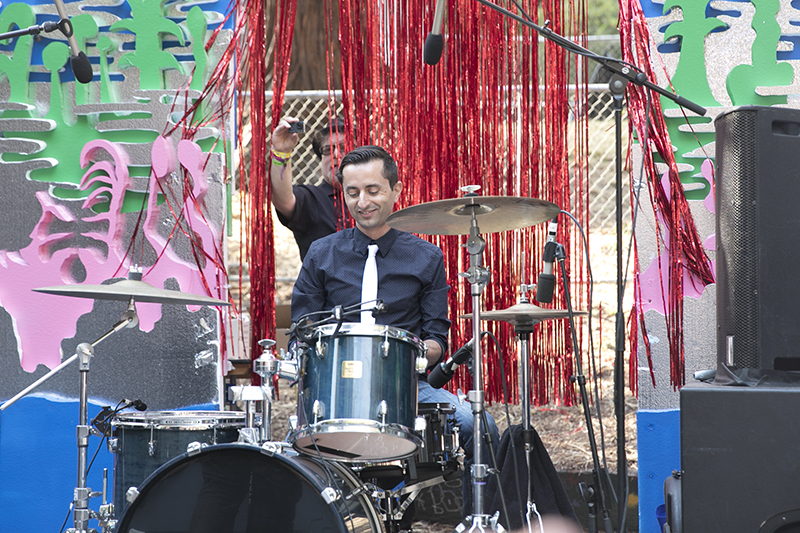 One of the statements Hunx made would be echoed through the crowd the entire weekend: “You guys are too far from us!” And we were. 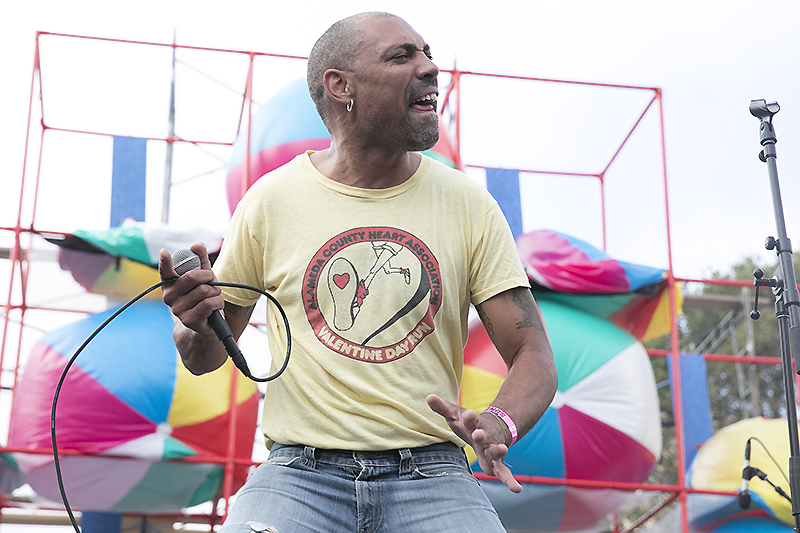 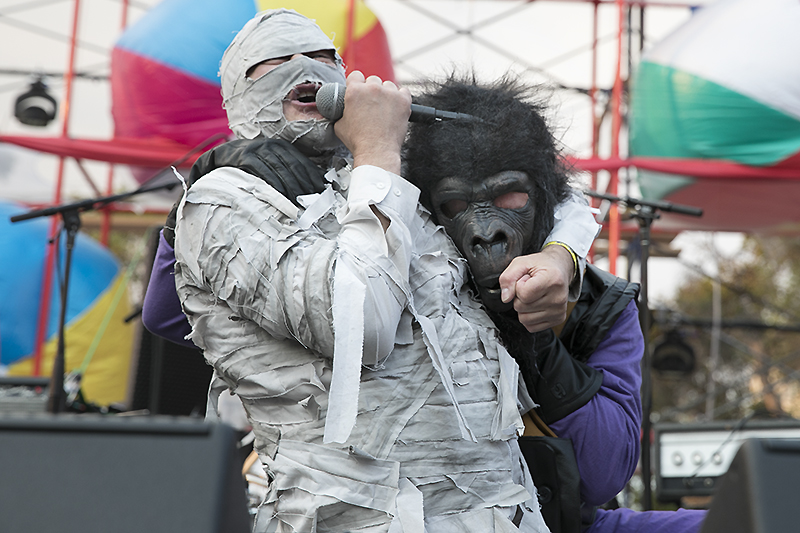 Another notable performance of the weekend was the hilarious reunion show of The Mummies. Opening their set with three people in imposing Planet of the Apes costumes, the lead ape set the scene by stating, in a very proper voice, that they had trained “man-animals to play music! They do not play very well, but as with a fish riding a bicycle, that they can do it at all is the truly remarkable thing. So please, prepare to amazed, astounded and edified. Bring on the man-animals!” Then the Mummies were forced on stage by their ape overseers to demonstrate this feat. 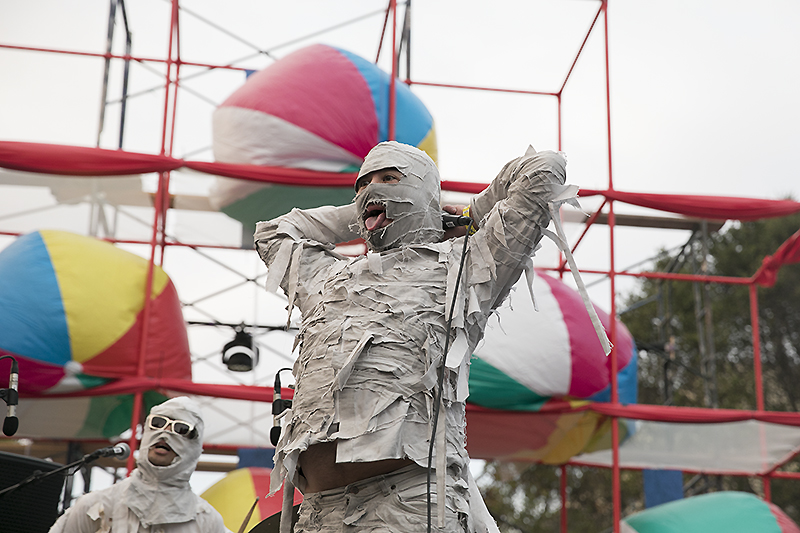 The Mummies, wrapped in tattered rags like, well, mummies, quickly veered off course, trashing their instruments and choosing to play their own music, beginning with “(You Must Fight to Live) On the Planet of the Apes,” while the apes patrolled the stage and later the crowd, thumbs-downing the band as they went. The Mummies put on an outrageously silly show that was entertaining from start to finish. The singer occasionally played his keyboard over his head, or lay across it, deliberately rolling off onto the stage on one occasion. And their audience was the most exciting of the whole weekend. There was a non-stop mosh pit and crowd-surfing galore – until the ape leader instructed the other apes to put an end to the nonsense and get the Mummies off stage at the end of the set. It was creative, ridiculous and wildly comical. 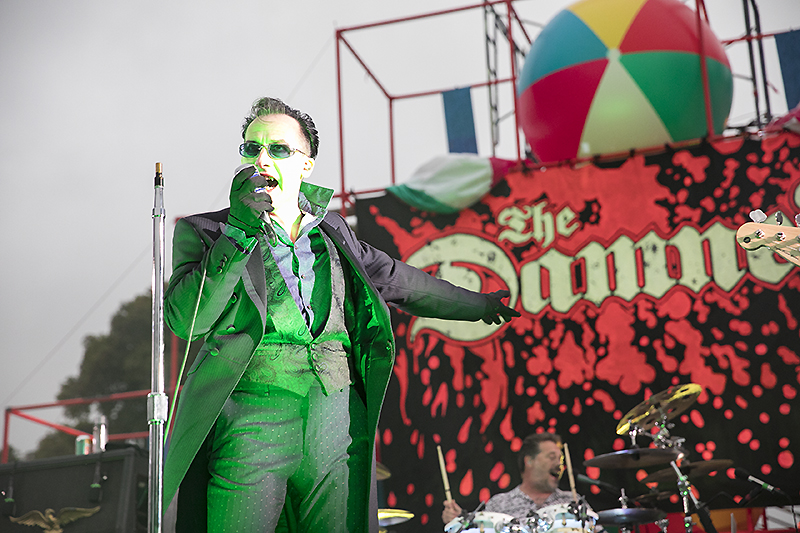 Like many bands who took the stage this year, the Mummies had something to say about the current political climate. “It’s not every day you get to stand in front of thousands of people all paying attention to you,” keyboardist Trent Ruane announced. “So with that I’d just like to say… Death to America! … – The band, the band!” 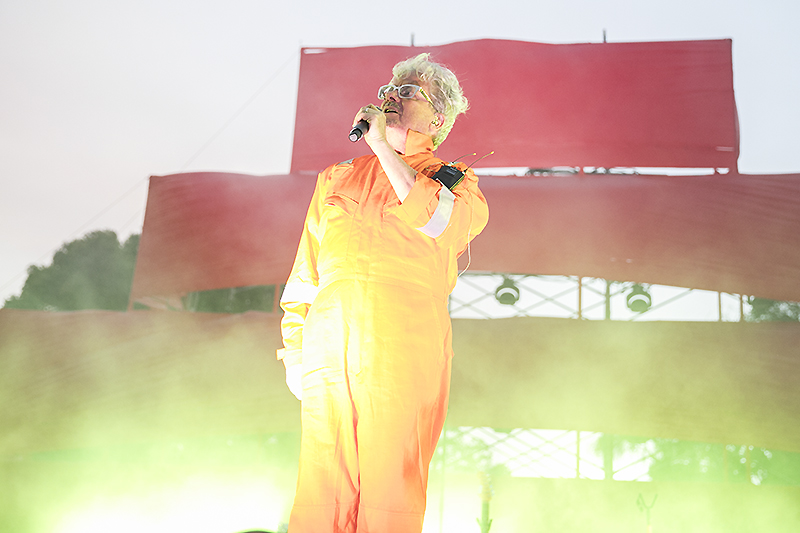 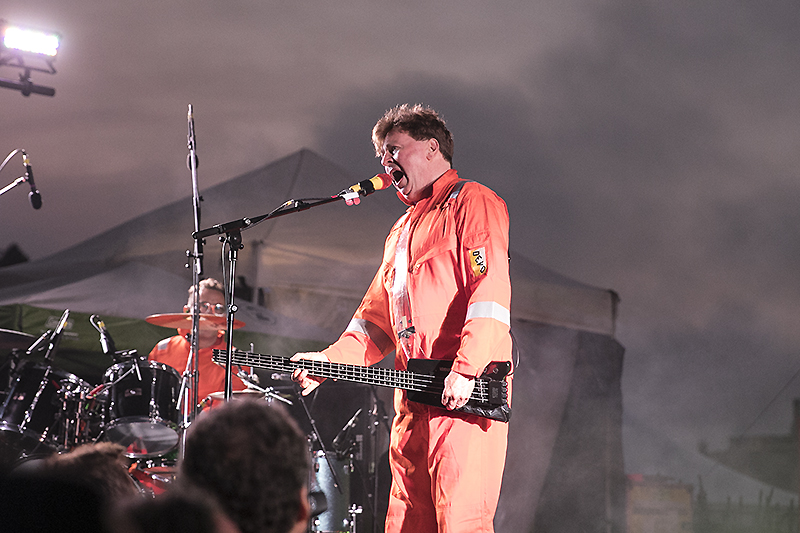 Saturday night headliners Devo put on a deliciously fun show that brought the crowd together in shared elation. Reuniting after four years just for Burger Boogaloo, the band featured actor/comedian Fred Armisen, who Mark Mothersbaugh said “drove all the way down from Portlandia,” on drums. Armisen, dressed in the same orange jumpsuit as the band, did not address the crowd or speak at all, and his drumming was so seamless it was easy to forget that he was anyone other than simply the band’s drummer. 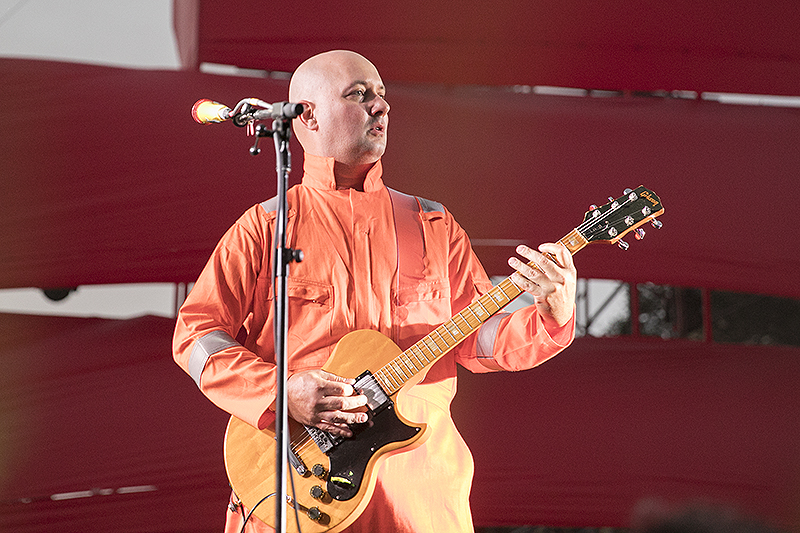 Devo opened with “Girl U Want” and followed with “Whip It,” sending the crowd into the biggest sing-along frenzy of the entire festival. Mark Mothersbaugh’s alter-ego, Booji Boy, was unleashed during the first encore for “The Girl Can’t Help It” and “Beautiful World,” which was offered as something of a eulogy to Pink Flamingos (and other John Waters movies) actress Divine. Other highlights of their set included “Uncontrollable Urge” and “Jocko Homo,” during which Jerry Casale declared Trump proof of devolution, and offered a solution: “We need chaos to fight his chaos. Pranks. We need pranks…” 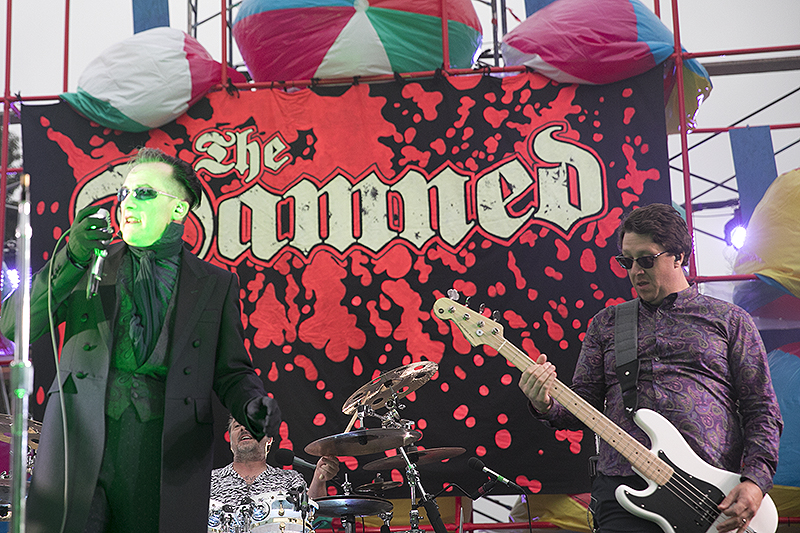 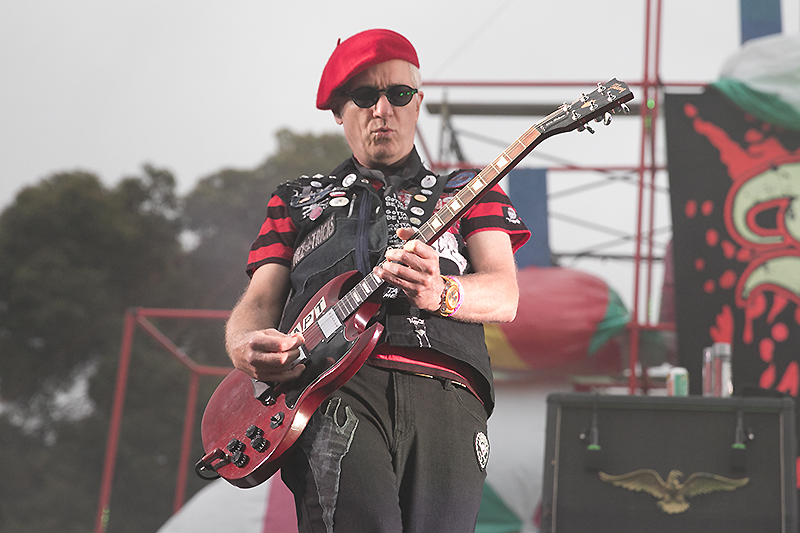 The Damned, one of the earliest innovators of goth-punk, headlined on Sunday. Dave Vanian came out in a blue three-piece suit and tailcoat, looking every bit like the dapper Dracula you secretly fantasize about. (It’s not just me, is it?) Ever the romantic, he strutted across the length of the stage cooing quietly at times, projecting elegantly at other times, sounding every bit as good as he did in the ’70s. 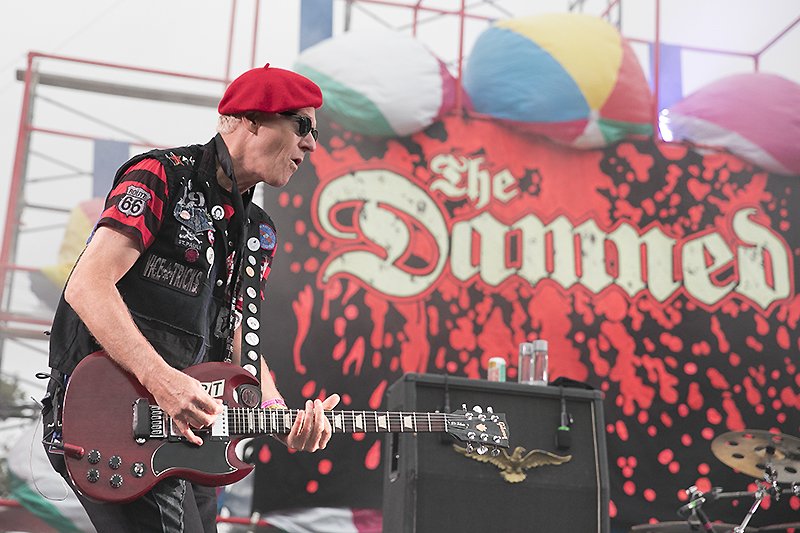 Blazing through hits like “Love Song” and “New Rose,” the band also played a song they wrote about Trump. “Bands have been writing anti-Trump songs for probably 20 years, and we’re no different,” guitarist Captain Sensible said before launching into “Devil in Disguise.” Many in the crowd responded by yelling, “Fuck Trump! Fuck you, Trump!” when it ended. 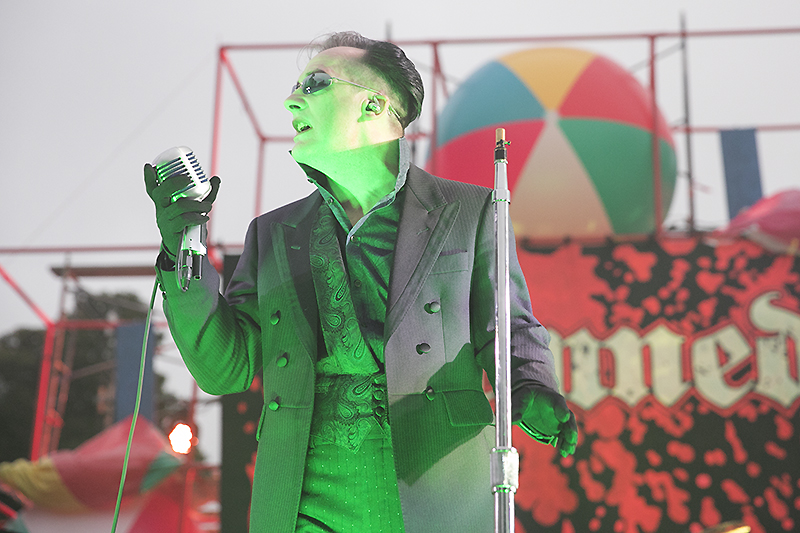 The Damned closed their performance – and the entire festival – with a touching tribute to Steve Soto, founding member of SoCal punk legends Agent Orange and Adolescents, who died suddenly in his sleep three days before the festival. Drummer Pinch shared that Soto had been a big fan of the Damned, and led the audience in a 20-second cheer in honor of his life. They dedicated their final song, “Smash It Up,” to Soto, and about a dozen people from backstage – including Jello Biafra – came out to dance and sing along in celebration. When it was over, Jello took the mic and honored Soto, thanking him for being here as long as he was. It was a sweet ending to a bittersweet festival.

Here’s a slideshow with more photos of Burger Boogaloo by Raymond Ahner: