The XVII annual Bone Bash at The Shoreline Amphitheater was one of the hottest shows of the summer. The 105 degree heat didn’t deter concertgoers as a sea of people holding lawn chairs and coolers filed into the venue from the dirt parking lot down the road. Put on by the Bay Area’s own hard rock radio station 107.7 The Bone, this year’s line-up included Foreigner on their 40th Anniversary tour with support band Cheap Trick and opener Jason Bonham’s Led Zeppelin Experience. The outdoor venue was a great setting for the show and the $30 lawn seats appeared filled to. The crowd, which was mainly 40 something rockers, had a great vibe and everyone seemed like they were having a great time. 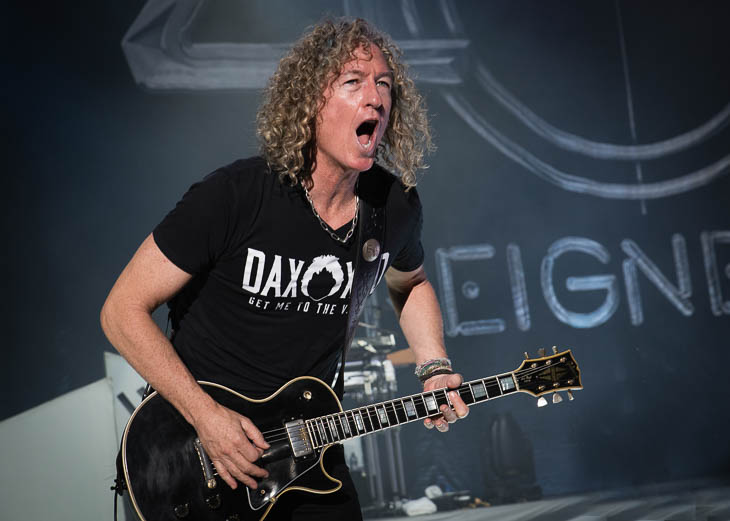 Headliner Foreigner played a set that was filled with nothing but hits, played in great form. Mick Jones, guitarist and songwriter, is the only original member of the band since it formed in 1976. He has assembled a line-up of well-known musicians including Kelly Hansen on vocals, Jeff Pilson (Dokken, Dio, MSG) on bass, Tom Gimbel (John Butcher Axis, Aerosmith) on rhythm guitar, sax, and keys, Michael Bluestein (Boz Scaggs, Stevie Nicks, house band on Jimmy Kimmel live) on keys, Bruce Watson (BB King, Rod Stewart, Christina Aguilera, Elton John) on guitar, and Chris Frazier (Steve Vai, Edgar Winter, Carole King, Eddie Van Halen) on drums. They hit the stage with their hit “Double Vision” and had electric energy through their set. The crowd sang along and danced to all the hits. Songs like “Head Games,” “Cold as Ice,” and “Waiting for a Girl Like You” were coming one right after the other and you realized these guys have been filling the airwaves and our lives with music for a long time. 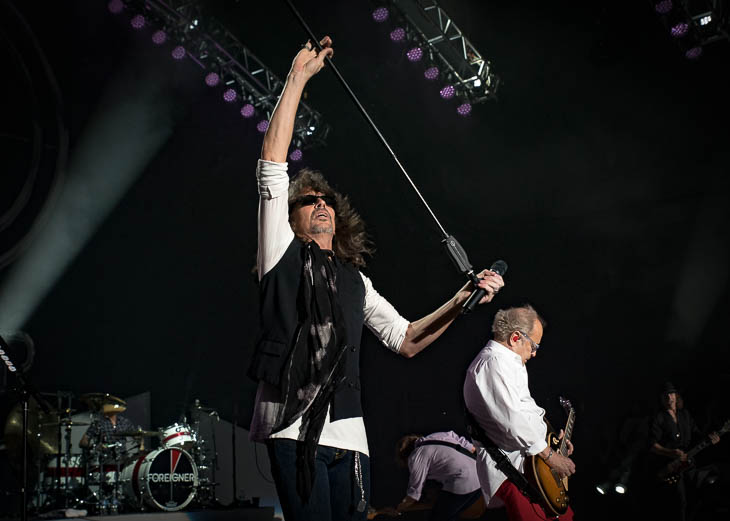 The band got a little rougher and more rocking with the song “Dirty White Boy” around the middle of the set. Singer Kelly Hansen looked and sounded great and ran all over the stage. through the aisles of crowd, ending up on a two-story high pedestal in the middle of the audience to sing “Juke Box Hero” while the spotlights shown on him. 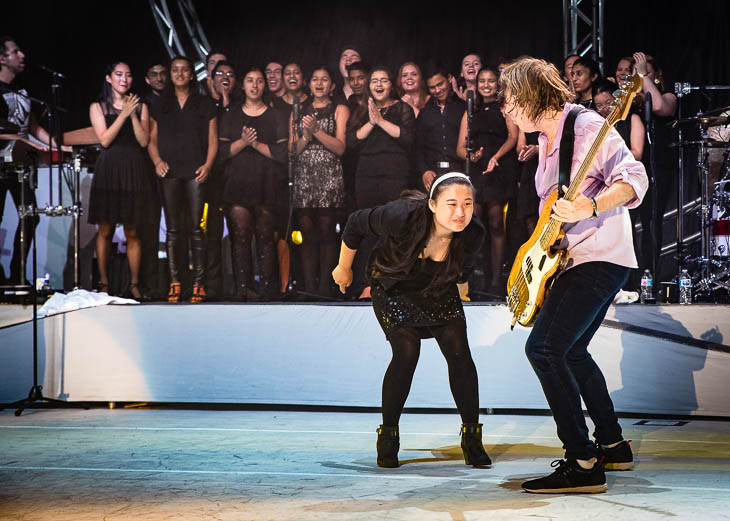 Guitarist Mick Jones had some great moments soloing and at one point the lighting gear rotated around to form a large “V” with all the lights pointing at him. The crowd cheered him on in appreciation. They came back for an encore with “I Want to Know What Love Is” with the Saratoga Highschool Choir joining them onstage while the crowd held up their cellphones and lighters. The set ended on a high note with an upbeat version of “Hot Blooded” that had everyone on their feet and singing and dancing. 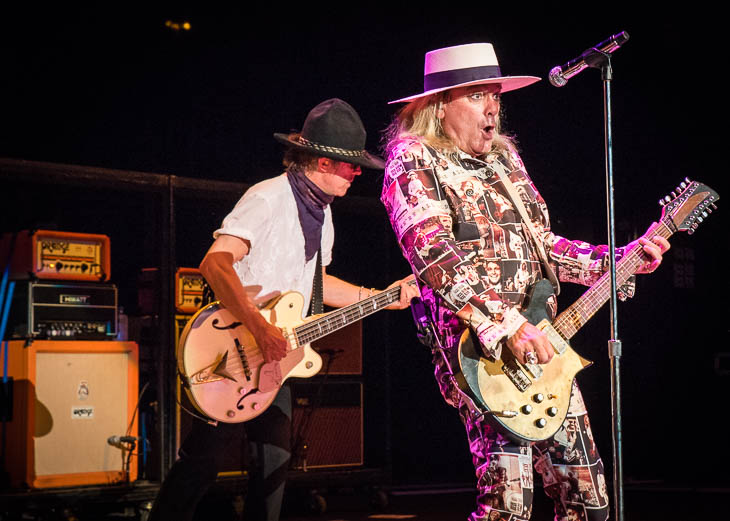 Support band Cheap Trick was fantastic as usual. They only played an hour long set but managed to fit in some of their longer jams, a couple new songs, and a few of their standby hits. Singer Robin Zander was sounding in top form and his voice seams to almost be getting better with time. He wore a suit that was printed with the same images from the band’s latest album cover “We’re All Alright!” which looked a bit like camouflage from the seats. Some of the highlights were “Just Got Back,” “California Man,” and “Need Your Love.” The new songs “You Got It Going On” and “Long Time Coming fit into the set nicely. Tom Petersson got to show off his amazing bass playing skills with a solo before going in to a cover of The Velvet Underground’s “I’m Waiting for the Man..”Guitarist Rick Nielson wasn’t running around as much as usual but his playing was on point and he managed to bring out a different guitar for every song, throwing out handfuls of picks like usual. The band ended their set with a string of their hits “I Want You to Want Me,” “The Dream Police,” and “Surrender,” which they still play with enthusiasm and passion even after playing them so much over the years. They ended the set with “Goodnight” and Rick brought out his famous five neck guitar and even held it above his head at one point. It’s so great that this band keeps putting out music and touring as they’re so fun to see and really a great rock ‘n’ roll band. 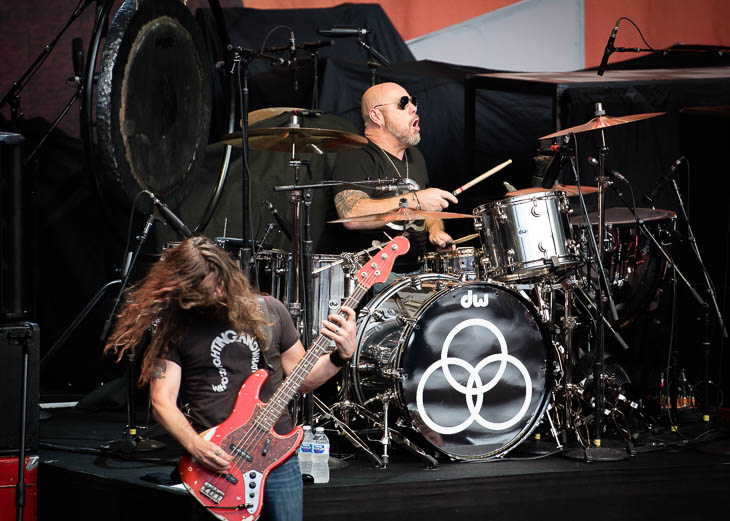 Opener Jason Bonham’s Led Zeppelin Experience was terrific as well. Jason is the son of the late drummer John Bonham, one of the original members of Led Zeppelin. He plays with this band doing Led Zeppelin covers as a tribute to his father’s music and they sound amazingly like the original Led Zeppelin band. At one point during the show Jason said, “This is the only way I know how to thank my father for teaching me how to play the drums.” Guitarist Tony Catania sounds remarkably like Jimmy Page, which isn’t easy to do. The band also includes vocalist James Dylan who did an amazing job, bassist Michael Devin, and Stephen LeBlanc on pedal steel guitar and keys. Jason is a hard-hitting drummer and you could feel his bass drum through your chest in the seated section. Some of the crowd favorites were “Ramble On” and “When the Levee Breaks.” They ended their set with “Whole Lotta Love” which had the crowd on their feet and wanting more. These guys are really doing an amazing job honoring the legacy of one of rock’s greatest bands. 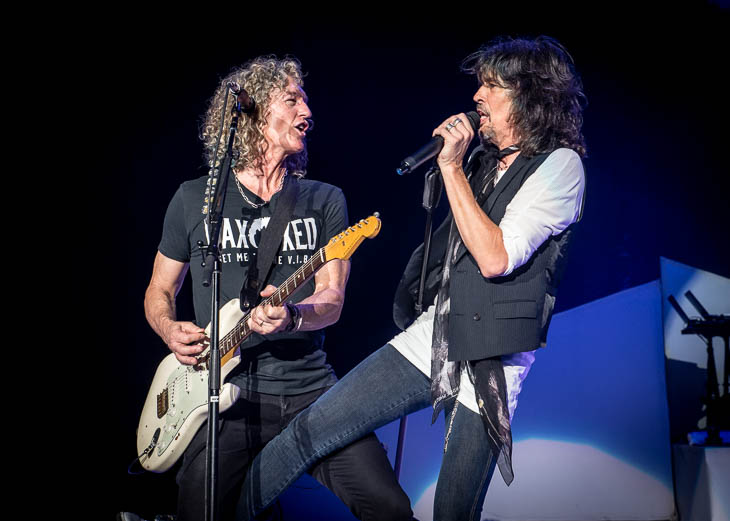 Despite the hot weather, all the bands put on a great show and the crowd was having a great time. The only complaint is that the Shoreline parking lot is designed to create a bottleneck when everyone is leaving and you end up sitting at a standstill for almost an hour before you can reach the gate to leave. Hopefully this can be improved in the future. Many thanks to The Bone 107.7 for making these summer concerts an annual tradition and we’re so grateful to hear these talented musicians all making music in one place. We’re looking forward to next year!

Check out this slideshow with more photos of Foreigner and Cheap Trick by Pollen Heath:

Setlist: Hello There | Just Got Back | California Man (The Move cover) | Long Time Coming | Baby Loves to Rock | You Got It Going On | Need Your Love | Bass Solo | I’m Waiting for the Man | The Flame | I Want You to Want Me | Dream Police | Surrender | Goodnight |

Learn everything there is about Jason Bonham’s Led Zeppelin Experience here.