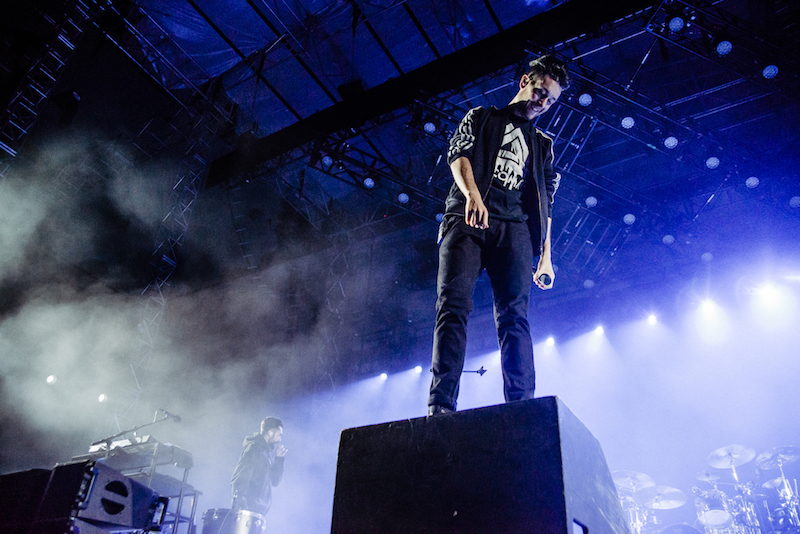 With a set list of more than twenty songs, Bastille performed an energizing mix of fan favorites and recent singles. Kicking off the show was the brass-heavy “Send Them Off!” immersing the audience in Smith’s command of the stage. Though far from graceful, the always-charming Smith confidently navigated the stage with his awkwardly endearing dancing. Smith himself admitted he is “the least talented dancer in the world” and encouraged the audience to jump around with him. During keyboard-driven “Flaws,” Smith left the stage to perform in the audience, wandering through the pit and up the venue steps, much to the delight of the fans. 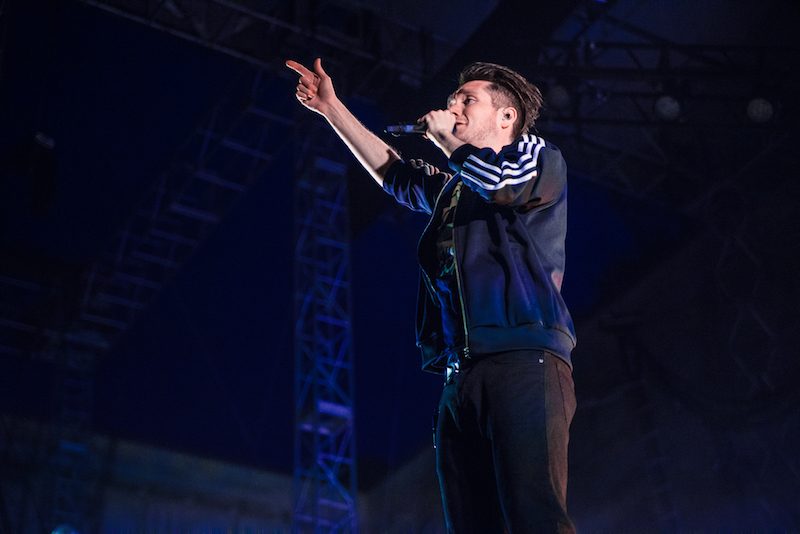 Smith’s interactions with the crowd were nothing if not self-deprecating. Song breaks were punctuated by his continual exclamations of gratitude and disbelief at playing in the venue. Smith frequently poked fun the melancholy songs the band is known for, acknowledging the often “incredibly depressing” lyrics. The lanky Brit and his bandmates’ humble self-awareness endeared them to their audience. 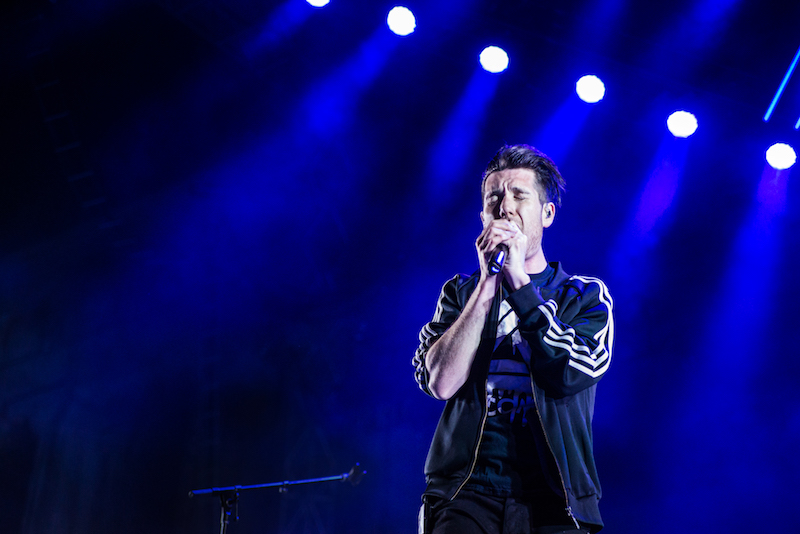 The band has taken great care to craft the tour’s visual elements to produce a distinctly cinematic experience. A towering screen filled the back of The Greek’s stage, engulfing the band in clips themed around a news broadcast as a reference to Wild World, the titular album of the tour. Inspired by the anxiety of watching the news in the tumultuous current sociopolitical climate, songs of Wild World were paired with clips of news broadcasts, dystopian images, and even a dopey news anchor lip-syncing Bastille lyrics. 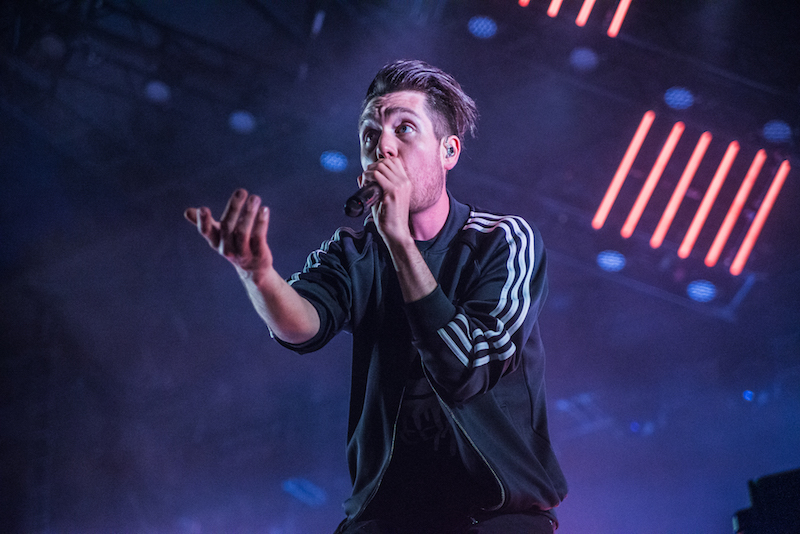 In the mournful piano ballad “Oblivion,” the expansive venue twinkled with the flash of thousands of phones held aloft. Lingering synths and Smith’s haunting falsetto enraptured the audience, creating one of the more magical moments of the evening. “Lethargy” followed, driven by a bouncy drumbeat and a wonderfully catchy pop melody. The stage was next bathed in red light for “Things We Lost in the Fire,” a dramatic rock arrangement punctuated by plucky guitar riffs and distinct drum beats performed by Smith on floor toms and a drum synth pad. The stage lights and bright neon colors onscreen were synchronized to the rhythm of the song, leaving the band’s silhouettes bouncing around the stage.

Up next, “The Currents” encapsulated the restless anxiety that inspired the album. With continually multiplying newsreels playing on the screen, the string-heavy song laments the overwhelming nature of current events. Smith did not shy away from calling out the song’s inspiration, altering one of the lyrics to “won’t Trump stop firing up the crazies,” sending the venue into a swell of affirming cheers, a brief but intense point of the evening that brought the audience together. 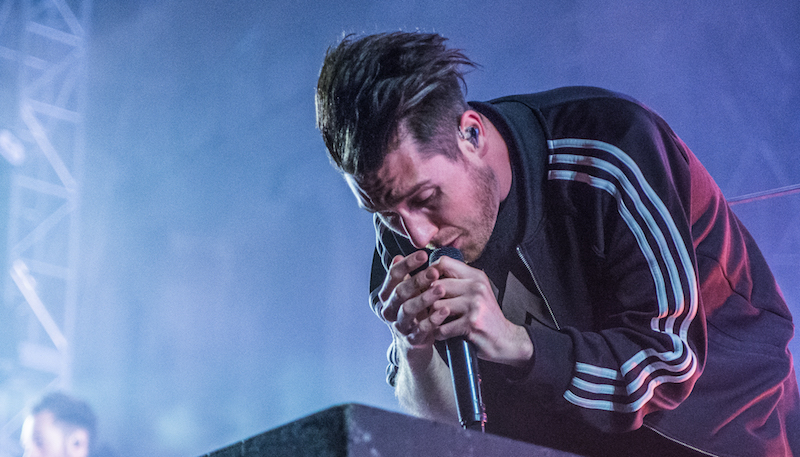 One of the obvious highlights of the evening was the aptly named “Glory.” The intense, cinematic song was paired with footage from the Wild World album cover shoot. As Smith sang of simple beauty in everyday friendships, scenes of two young men climbing to the top of a New York skyscraper rolled on the screen. Gliding aerial shots of the twinkling city skyline highlighted the swelling orchestral crescendos of the chorus. The song’s a cappella bridge left the amphitheater still and quiet with Smith’s falsetto echoing across the expanse before the return of the sweeping violin melody that concluded the song.

Bastille began the encore on the highest steps of The Greek’s pavilion, performing the lamenting ballad “Two Evils” with only Smith’s vocals and Farquarson on guitar. The stripped back arrangement paired with a single spotlight proved hypnotic, with the crowd turned in their seats to experience the song. With minimal backing guitar, the song showed the full range of Smith’s talent, with delicate falsetto and rumbling baritone in succession. Once back onstage, the lively “Icarus” followed, with a return to Smith on the floor tom. Closing the night was Bastille’s 2013 breakout hit “Pompeii”. Beginning with a slow piano rendition of the instantly recognizable “eh-oh” vocalizations, Smith slowly built the audience into the upbeat, percussive chorus that propelled the band into the mainstream. The irresistible song perfectly culminated an electrifying evening, leaving the entire amphitheater tirelessly jumping and shouting along to the rousing, anthemic earworm.

Opening for the night was indie rock band Mondo Cozmo, headed by Josh Ostrander, formerly of the band Eastern Conference Champions. Despite an un-equalized sound system leading to some initially garbled songs, the enthusiasm and intensity of the band kept the crowd engaged throughout the set. From the bouncy pop backing vocals of “Higher” to the band’s cover of “Bittersweet Symphony,” Mondo Cozmo continually hyped the crowd for its headliner. Ostrander exemplified his rugged charm by leading the crowd, beer bottle in hand, in three cheers of hip-hip hooray for Bastille. The band returned to the stage during the encore, helping Bastille close off the night in the raucous rendition of “Pompeii.”