It started to snow just before Arcade Fire greeted an electrified, sold-out crowd at Berkeley’s Greek Theatre. Small, white paper flecks fell from above, artwork from their first album, Funeral, swirled on the backdrop — the red hues mirrored off all seven dangling disco balls.

There wasn’t an inch of floorspace between the stage and the lawn. Echoed howls filled the concrete coliseum and an eagle-eyed audience smiled when Arcade Fire opened with a beloved favorite, “Neighborhood #1 (Tunnels).” It wasn’t long before everyone realized they were in for an extraordinary treat — a live performance of Funeral in its entirety.

Perhaps the nostalgic set was sparked by frontman Win Butler’s love for his late grandfather, Alvino Rey, who is buried in San Francisco. Rey was a big-band leader and pedal steel virtuoso who backed Dean Martin and Elvis Presley. He also performed with Butler’s grandmother, Luise Rey, who sang in a group called the King Sisters. 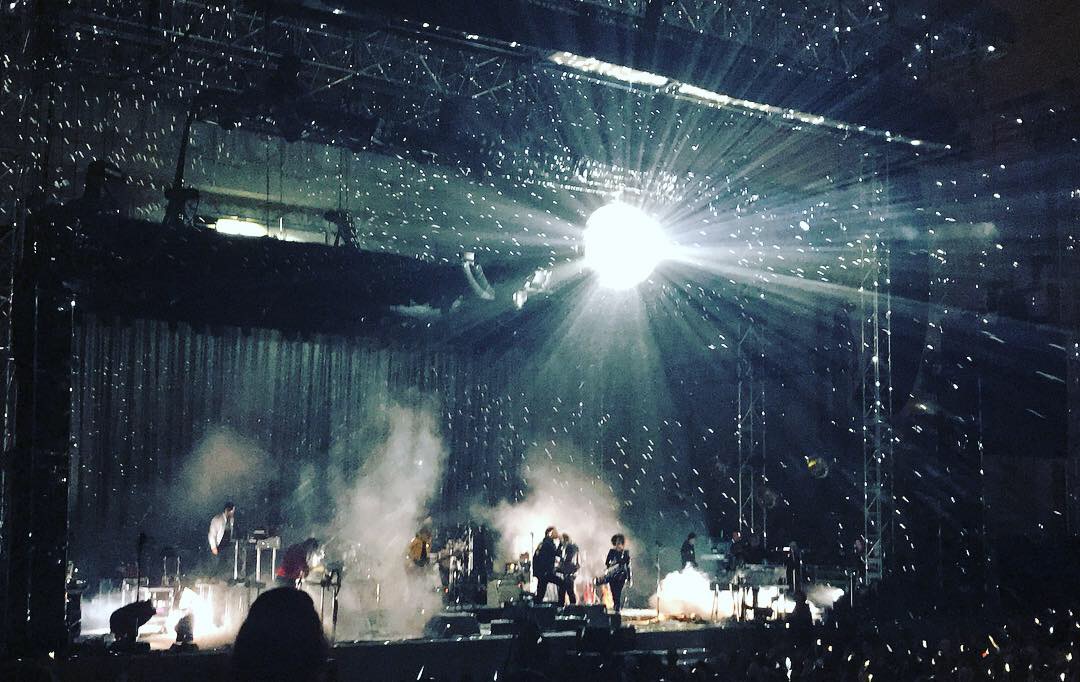 “Every time I’m here I think about him,” Butler said. In 2004 — the year Funeral was recorded — many band members were experiencing deaths in their families. The record is saturated with somber sentiment, yet when played live, it awakens a liveliness analogous to a punk show. No one seemed able to contain themselves.

The band only played Funeral front-to-back at three California stops (two at the Greek) before closing out their two-year-long tour in Vegas. Each track acted as a performance piece — the art, the light, and the costumes (black-and-white suits of yesteryear) were intentional, but each member’s playing style felt raw and off-the-cuff.

Tiwill Duprate quickly slammed a tambourine into his body, then into the air; his dark hair glistened with sweat as he fiercely threw his head back. Richard Reed Parry danced, his arms acting like a motor, hitting the strings of his guitar to the beat. Co-founder Régine Chassagne spun in circles and twirled silky cloth as she ran across the stage. Frontman Win Butler stood atop a speaker, held his guitar above his head and asked the crowd to sing along. His brother William strummed his guitar as Sarah Neufeld vivaciously bowed her violin. Jeremy Gara pounded the drums as Tim Kingsbury went back and forth from bass to guitar and Stuart Bogie switched between saxophone, flute, and keyboards. 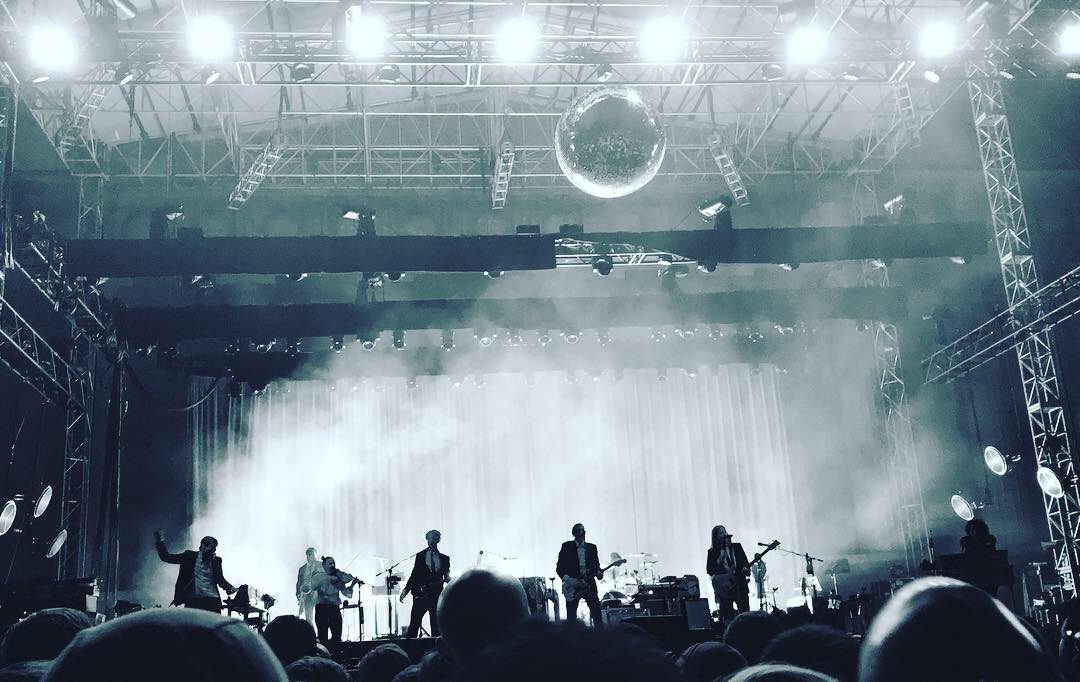 Arcade Fire is one of the most celebrated bands on the planet. Some say they’re indie rock, others say they’re art rock, dance-pop, or baroque pop. One thing is for certain – the Canadian band is influenced by music from all over the world. Chassagne is the daughter of two Haïtian immigrants, and the band has traveled to the Caribbean country (much of Reflektor was written about the transformative experiences they had there) to find inspiration. But before their Reflektor days there was a little track called Haïti.

Accompanied by two dancers, Chassagne stood atop a raised platform. Whirling their traditional Haïtian dresses — Chassagne in striped black, red, white, and green — the trio danced to the beat. All three wore small, black boxing gloves and paused to punch in unison before thrusting their beautiful curls in circles.

The crowd went wild when they heard opening chords to “Wake Up.” Within seconds everyone belted out the song’s chorus. Parry pummeled a propped bass drum, simultaneously slamming a tambourine into his drumstick.

During “Rebellion” Duprate jumped off the stage and ran through a mass of screaming fans, all while clobbering his small snare drum. People swayed to “Crown of Love” until its beautiful melody erupted into a jubilant dance party. They closed out their first set with “In the Backseat.” Chassagne’s Björk-like voice is exquisite — its delicacy should never be mistaken for softness. The music picked up, the ethereal sounds of heavy violin and Chassagne’s belting vocals hovered over the crowd and revived an anthology of emotions before the band disappeared backstage.

Could that be it? It felt too special to be over.

In all their glitzy glamour, the band reemerged in their Everything Now attire. They played tracks from the rest of their five-album, Grammy-winning catalog, starting round two with a fabulous version of “Reflektor.” Dressed in a sequined jumpsuit, Chassagne and two dancers appeared at the back of the floor. Voguing around an iridescent disco ball, she harmonized with her husband, Butler, from across the theatre.

Standing near the steps, a young man screamed “Yes!”, punched the air, and jumped forward. His brut dance moves felt animalistic, yet he looked as if he could cry. He yanked his jeans, threw his hands over his mouth, and ran his fingers through his inch-long hair. His enthusiasm was contagious. Looking up, all 8,000 people were on their feet.

A chugging synthesizer generated vibrations, which were veiled within the thick smoke that poured off stage. They crept up your legs and out your fingertips. White beaming lights flickered overhead. Chassagne, strapped with a giant futuristic keytar, started to play the simple intro to “Creature Comfort,” a new track off their 2017 album. It was one of their most stunning performances of the night.

The song tackles suicidal ideation. Its morose lyrics honor all the boys and girls who hate themselves — those who “stare in the mirror and wait for the feedback.” One line is dedicated to Butler’s friend who claims she almost killed herself before she “Filled up the bathtub and put on our first record.”

People danced and sang along to “Put Your Money on Me” and 2010 hit “The Suburbs.” And just as it seemed like the vibes were simmering, they played “Ready to Start” and set fire to an already emotional audience.

Arcade Fire closed the evening with a disco-inspired track, “Everything Now.” The bright blue backdrop anchored a sparkling, spinning disco ball and hidden cannons shot confetti into the crowd. It was like being inside an enormous kaleidoscope. People twirled under the paper as if they were dancing in the snow. As the euphoric, two-hour set came to a close, the crowd roared in applause before the band graciously thanked the Greek and said goodnight.

Arcade Fire puts on a cathartic show for so many different reasons. Sometimes your mouth dropped because you heard a song you’d never thought you’d experience live. Other times you reveled in unabashed joy as you watched members chaotically groove in their own way, as if their bodies were attached to whatever instrument they were playing at the time. You may have closed your eyes during all the flashy parts because it brought up feelings about a person or a place you’d long forgotten. And sometimes, you simply catch yourself giggling because you hadn’t realized a show could evoke that much joy.

Setlist: Losing All Sense | Yet Again | Fine for Now | Ready, Able | Mourning Sound | Sleeping Ute | Two Weeks | While You Wait for the Others | Three Rings | Sun in Your Eyes