Andrew McMahon in The Wilderness
UC Theatre, Berkeley
May 6, 2017

Alternative pop/rock singer Andrew McMahon in the Wilderness brought his energetic Zombies in America tour to The UC Theatre one recent Saturday night, a treat for old and incoming fans alike. Returning to his home state, McMahon punctuated the night with his genuine gratitude towards the audience and an evident passion for his music that kept the crowd engaged for the twenty-song set. 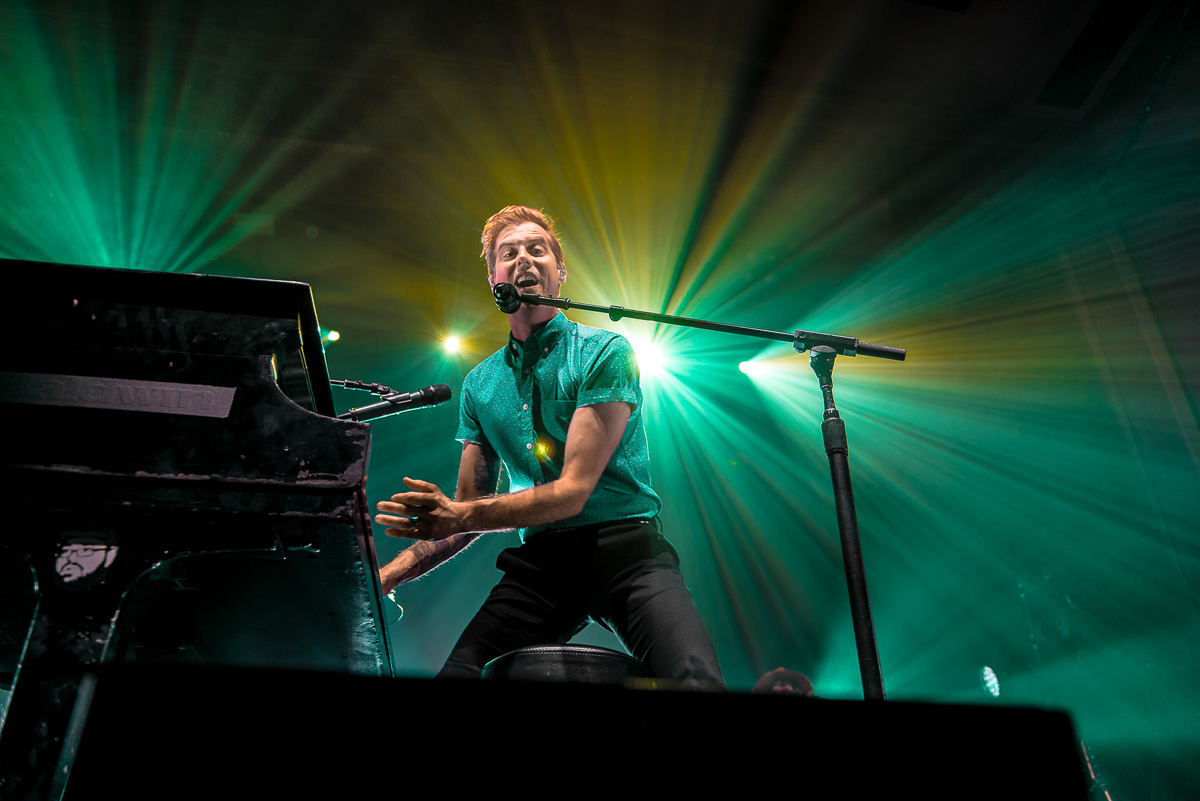 Starting off the night was the unapologetically mainstream radio favorite “Fire Escape.” The perfectly coiffed McMahon set the tone for the evening, showcasing a powerful voice that handled the punches of the chorus and delicate bridges with ease. Instant recognition of the earworm allowed the crowd to immediately share in McMahon’s excitement. Up next, “Canyon Moon” allowed McMahon to display the almost manic energy that propelled him through the night. He expertly worked the crowd, twirling and jumping around the stage to the song’s rolling drumbeat. Synth-backed “High Dive” maintained the set’s relentless energy, with McMahon unable to keep his seat at the piano. Completely enthralled in the melody, McMahon would spring from the piano stool for several lines, an indication of his uncontainable passion for performing. 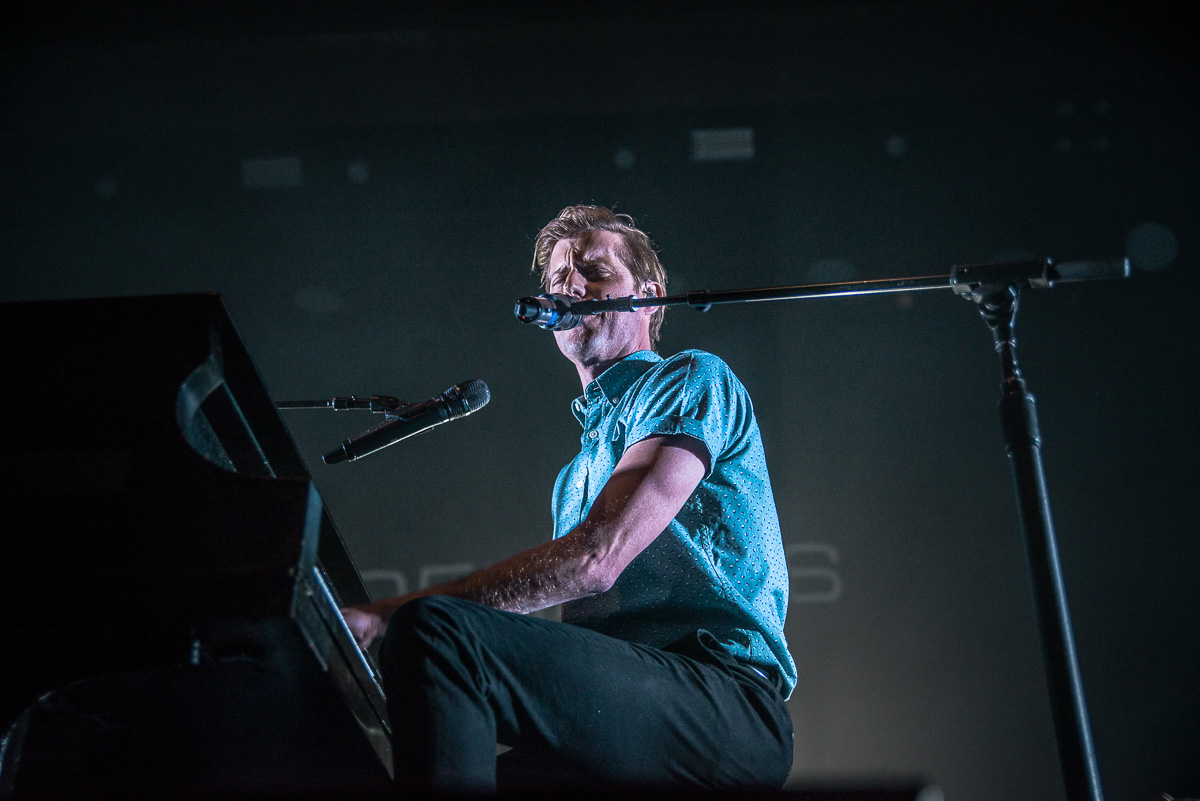 Spanning nearly two decades, McMahon’s lengthy career has included fronting the groups Something Corporate and Jack’s Mannequin, and he possesses the loyal fan-base to match. Though engaged throughout the night, it was the performances from McMahon’s earlier works that sent the theater into an eruption of cheers. “Dark Blue,” the powerful piano-driven single from Jack’s Mannequin, was met with instant audience recognition. Pop-punk tune “The Mixed Tape” had the entire audience singing along, and the poignant “Swim” left them entranced. A single spotlight illuminated McMahon at the piano as he performed the Jack’s Mannequin-era melancholic lament to the importance of persistence. McMahon’s soulful croon breaking through the still quiet of the enraptured audience gave the song a near angelic feel. 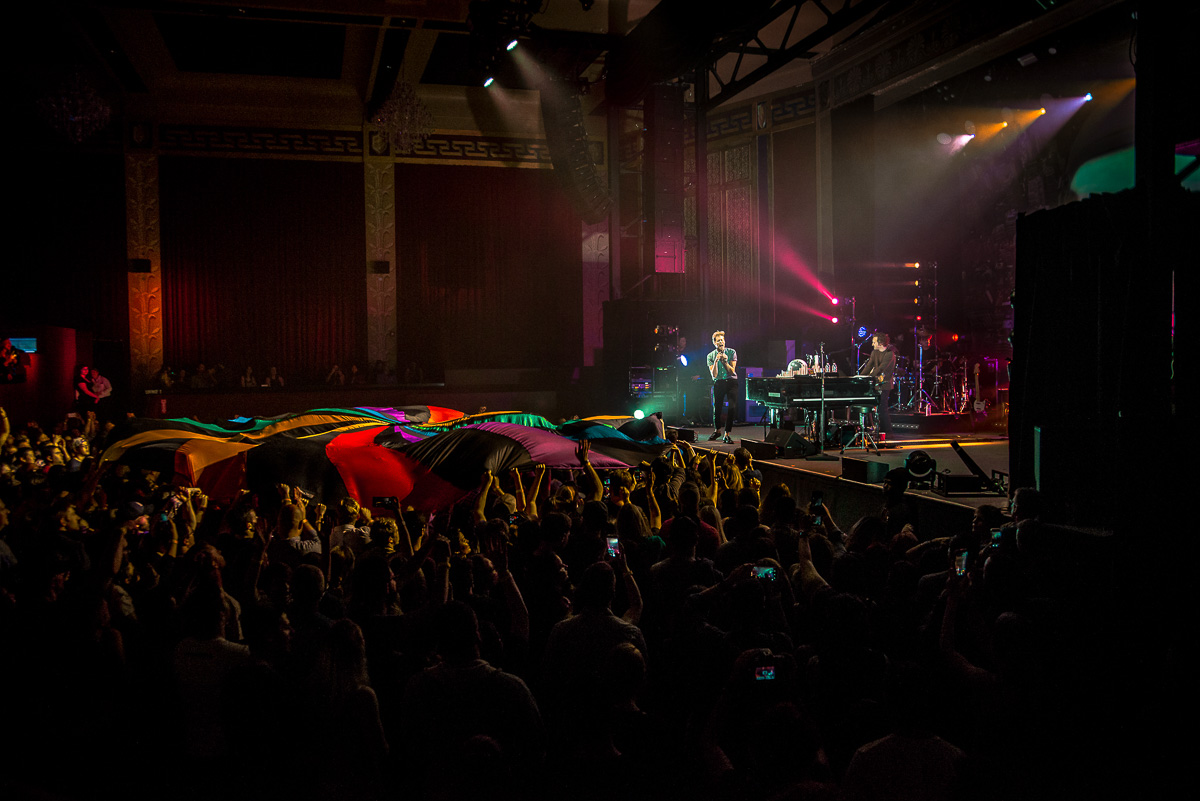 The final song of the set before the encore was “Synesthesia,” a bouncy pop ballad about the sensory whirlwind of a meaningful life. A large rainbow parachute, like those used in elementary school PE, was spread across the pit during the song. McMahon introduced the song as a way to momentarily forget labels and differences, and to simply have fun dancing with childlike ease. This performance beautifully demonstrated McMahon’s ability to entwine sincerity with whimsy. With McMahon introducing the parachute as an opportunity for “one of those perfect moments” and the crowd beneath the parachute entirely embracing the present, “Synesthesia” proved to be a heartwarming spectacle. McMahon concluded the song standing on his piano with the parachute wrapped around his shoulders like oversized wings, leading the crowd in an a-cappella call and response. The final notes echoed through the theater, leaving no doubt about the eagerness for an encore. 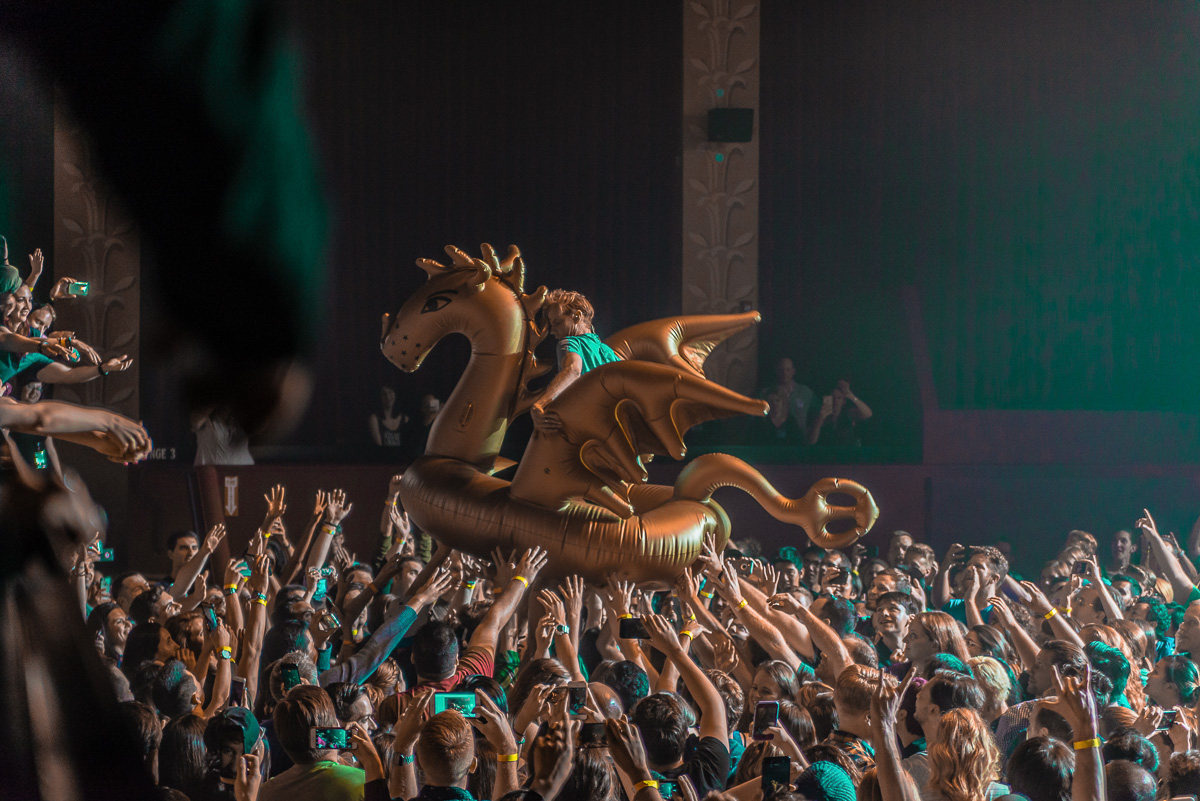 McMahon concluded the night with the same high energy the audience had come to expect. After surfing the crowd on a large inflatable dragon, McMahon returned to the stage for a final performance of the wildly popular “Cecilia and the Satellite.” The song, filled with rolling synth backing and Mumford and Sons-esque vocalizations and written for his infant daughter, brought the show to an electric conclusion. As the instruments dropped out, McMahon beamed and extended his microphone out to the crowd. The venue filled with the sound of hundreds of voices singing in unison, making the final moments of the night a beautiful testament to the passion and joy shared between audience and performer.

Atlas Genius, an Australian alt-rock band consisting of the three Jeffrey brothers as the central ensemble, was the night’s main opener. Despite an initial lull during the first several songs, the crowd’s energy picked up immediately after the roguish lead singer Keith Jeffrey began interacting with the audience. Jeffrey complimented Night Riots, the previous opener, explaining “it’s just men complimenting men. Could be platonic, might not be.” Such cheeky banter drew the crowd into the set, enfolding them into the brother’s camaraderie. Intense, stomp-worthy beats were the centerpiece of Atlas Genius’s songs. The band is unapologetically rock-and-roll, twisting the ‘80s glam-pop classic “You Spin Me Right Round” into a rock ballad with dripping guitar riffs and gruff vocals.

Opening first was the fresh-faced Southern California rock band Night Riots. The group, looking like they had stepped onto stage off the pages of an Urban Outfitters catalogue, was completely at ease on stage, exuding natural swagger. The lead singer, shaggy-haired Travis Hawley, commanded the stage. His smirks and waves to the crowd maintained the growing buzz of energy throughout the set. The band’s cover of “Sunday Bloody Sunday” was a clear highlight, allowing Hawley to demonstrate the strength of his plaintive wail with impressive command of the song. A drum interlude performed on the darkened stage by the entire band with LED-lit drumsticks further engaged the crowd in an undeniably pleasing display. Night Riots proved themselves to be a band to watch.

Andrew McMahon and The Wilderness:

Setlist: Fire Escape | Canyon Moon | Walking in My Sleep | High Dive | Dead Man’s Dollar | Island Radio | Dark Blue | Don’t Speak for Me (True) | All Our Lives | Brooklyn, You’re Killing Me | The Mixed Tape | Shot Out of a Cannon | I’m On Fire | Swim | So Close | I Woke Up in a Car | Synesthesia | Birthday Song | La La Lie | Cecilia and the Satellite

For more information about Andrew McMahon in The Wilderness, go here.

Find out more about Atlas Genius on their website.

For more information about Night Riots, check out their website.