Just one year ago, Andra Day appeared in San Francisco at The Rickshaw Stop, a small but cozy venue. It was a bit of a surprise, she already had a major label contract and was appearing on TV shows regularly. The last year has been all upbeat for Day and her return to The Fillmore demonstrates just how much her fan base has grown. 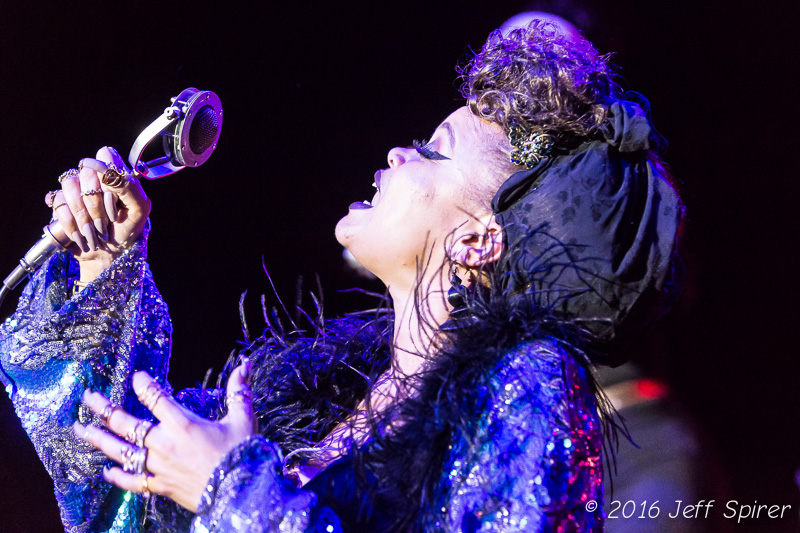 That growth hasn’t just come from Day’s voice, which should be enough – she’s been featured in promos by McDonald’s and Coke. She appeared in an Apple commercial singing with Stevie Wonder, who is responsible for her initial success. She sang at the Democratic National Convention. With a major Billboard award, a Grammy nomination, three BET awards, and yet another award from the NAACP, it’s difficult to miss her. It’s come from her songwriting and her presence. And maybe a bit from her look – last year, she could have come out of a WWII poster about women in the factories, and this year, she could be on a magazine cover. Wait, she is on magazine covers now. 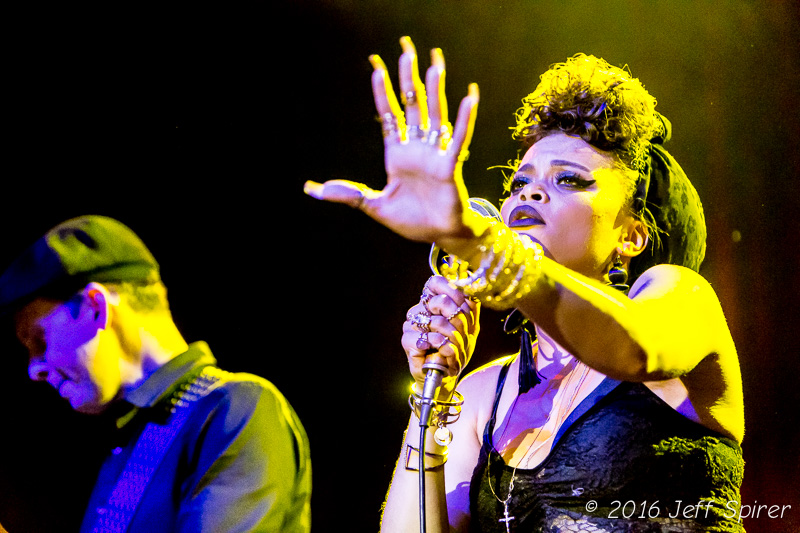 It’s against this backdrop that Day appeared at The Fillmore on a cool November night. She brought her soulful, inspirational voice to the stage, backed by a simple band that eschewed the ever more common laptop and electronics. Day shares with artists like Leon Bridges an alternative view of modern R&B that harkens back to a time when music was designed to allow the full emotional appeal of the singer to shine. 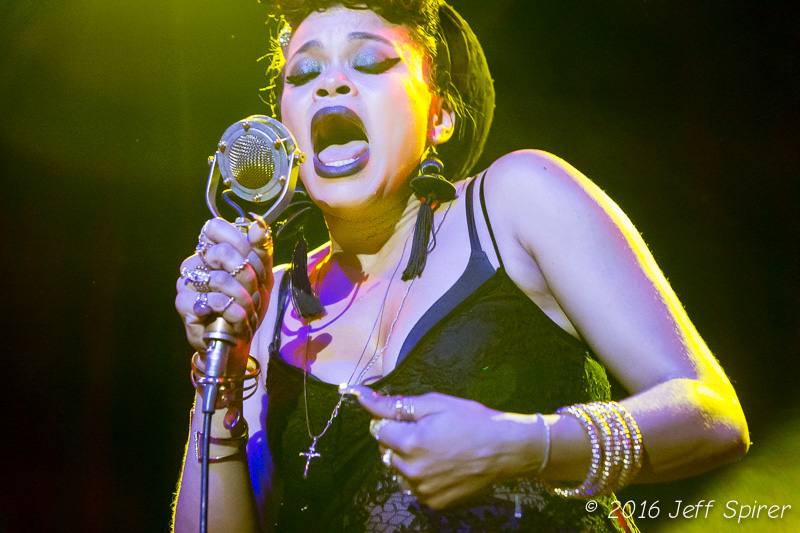 Day travels between her own songs and unexpected covers. Whatever she sings, it’s always hers,like so many classic soul performers did back in the day. (Think Otis Redding turning “Satisfaction” into his song.) She has a strong voice with terrific range, and when she heads for the high notes, it’s not showboating, it’s serving the higher purpose of making the emotion pop. She often sings wordlessly, not quite scat singing, which she could easily do, but just carrying the melody and the feelings without need for lyrics. 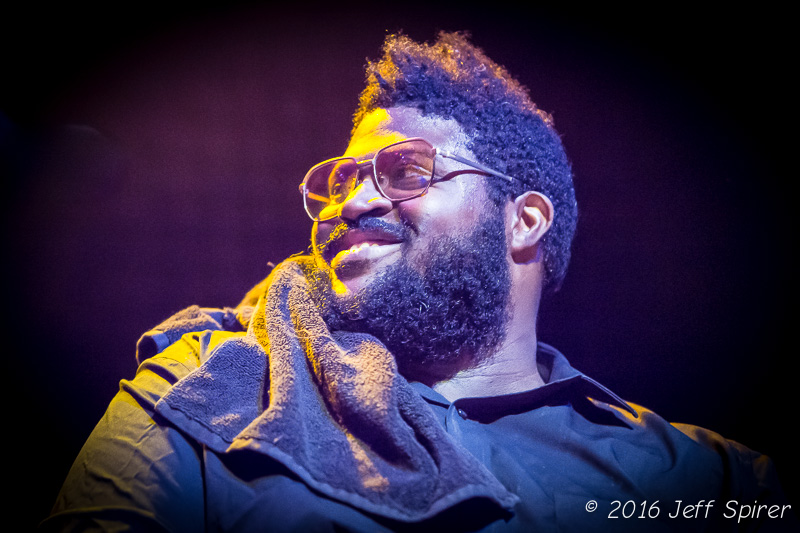 With just guitar, bass, drums, and keys (complemented by two backup singers), the music avoids cliché modern R&B with synth beats and samples. The band moves into jazz territory occasionally, in fact, it’s a surprise that Day isn’t playing Davies Hall. Fronted much of the time by Charles Jones’ keyboard wizardry, the sound is dense and modern, yet retains that throwback feel. However, for one song the band stepped out and Day sang, as she has often done, just accompanied by Jones. 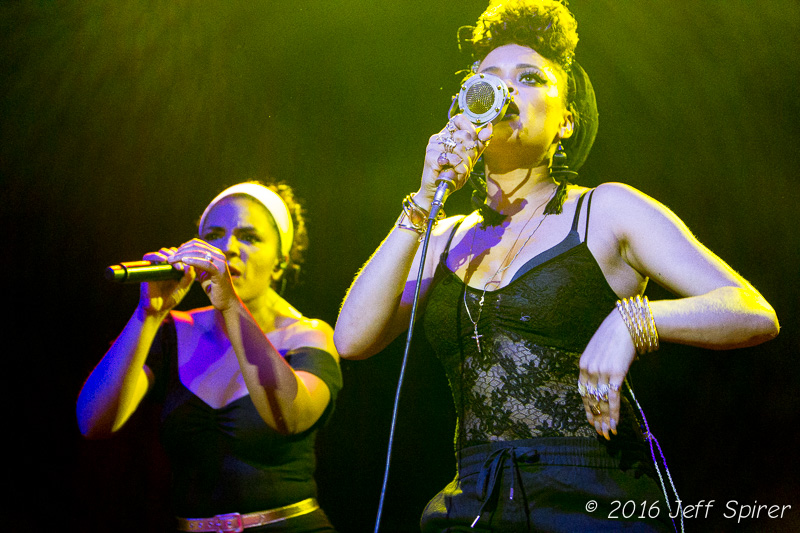 Of course there would be no Andra Day show without the anthemic “Rise Up,” a song that has become synonymous with Day’s name. Day introduced the song with a short talk about how the song is about battling insecurity, using its gospel-like, inspirational feel to engage every single person in the crowd. Played at The Fillmore, the band brought a slightly bigger version than the single, which is just piano and backup vocals behind Day. Towards the end of the song, Day had the crowd sing with her mic pointed at the packed Fillmore, and sing they did, almost everyone knowing the lyrics. 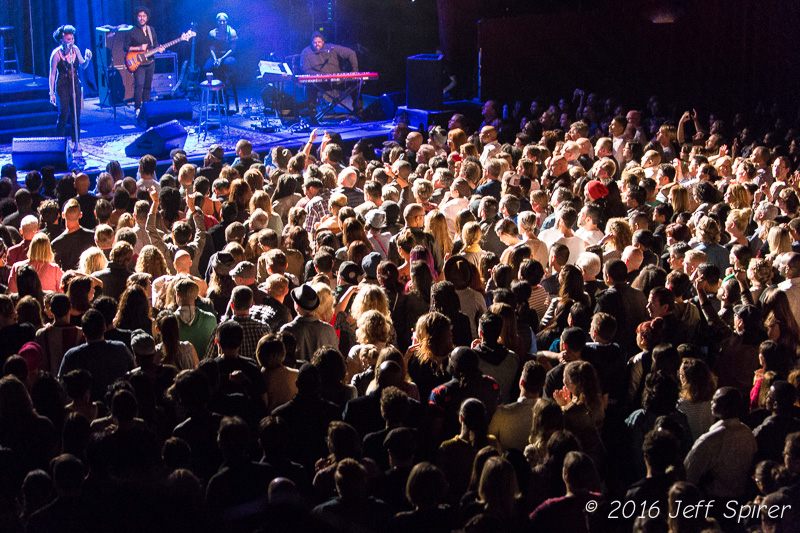 Coming back to “unexpected” covers … the encore at her recent performances, including this night at The Fillmore, is Queen’s “I Want It All.” And when Day sings it, you know she wants it all. It’s an impassioned plea reminiscent of James Brown, with Day dropping to her knees and hitting a growl as she pushes out the lyrics. And through this song the sometimes cited resemblance to Amy Winehouse is most prevalent, a tribute to the quality of her voice. It was a fitting end to the night, emotionally exhausting for both performers and audience. 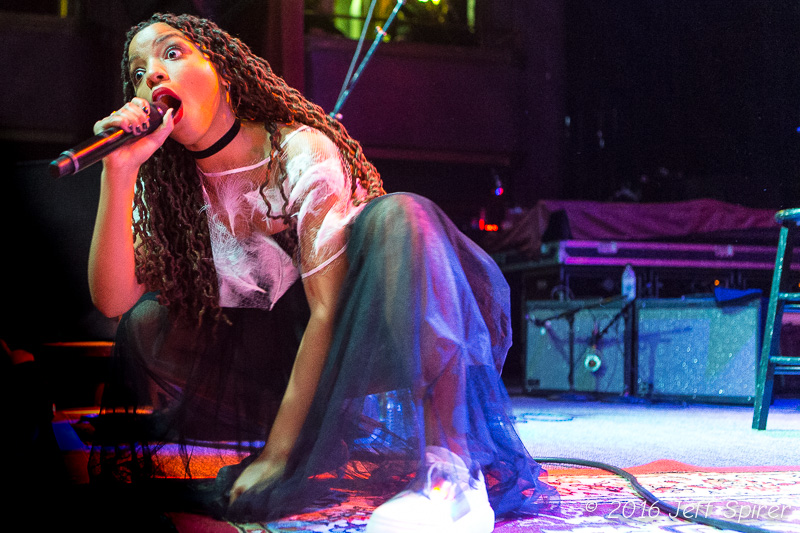 The show opened with Chloe x Halle, two teenage sisters who have been making waves because of Beyoncé’s “discovery” of the duo. The songs produced under Bey’s tutelage don’t prepare listeners for their live show. The recordings seem to push Chloe x Halle into more traditional R&B production. While most likely beneficial for their career, it takes away the eclectic and quirky performance that makes them stand out. 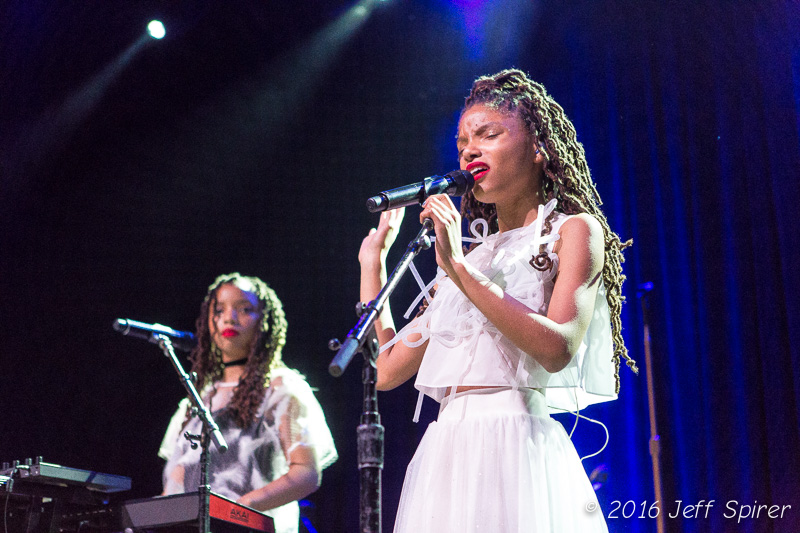 Using their crystalline voices along with guitar (Halle) and keyboard plus laptop (Chloe), the music mixes up folk-like tunes and occasional a capella segments that emphasize the harmonies, letting the vocals dominate the proceedings. At other times, there is music with South African overtones, and at one point the vocals were mostly absent as thumping dance club beats took over. They dance too, move away from the instruments. Chloe almost taunts the crowd as she squats at the front of the stage. It’s a fun performance with a huge amount of talent that deserves to be heard as it is and not compressed into a format.

Check out this slideshow of photos by Jeff Spirer of Andra Day and Chloe x Halle:

For more information about Andra Day, see her website.

Read the SF Sonic review of Day’s performance in November, 2015 at The Rickshaw Stop here.