Anderson East has a pedigree that seems primed for country music success. His girlfriend is acclaimed country singer (and Grammy Award winner) Miranda Lambert, he started his music career in Music City U.S.A. (Nashville, Tennesee), and he has written music with country stars Chris Stapleton and Sturgill Simpson. 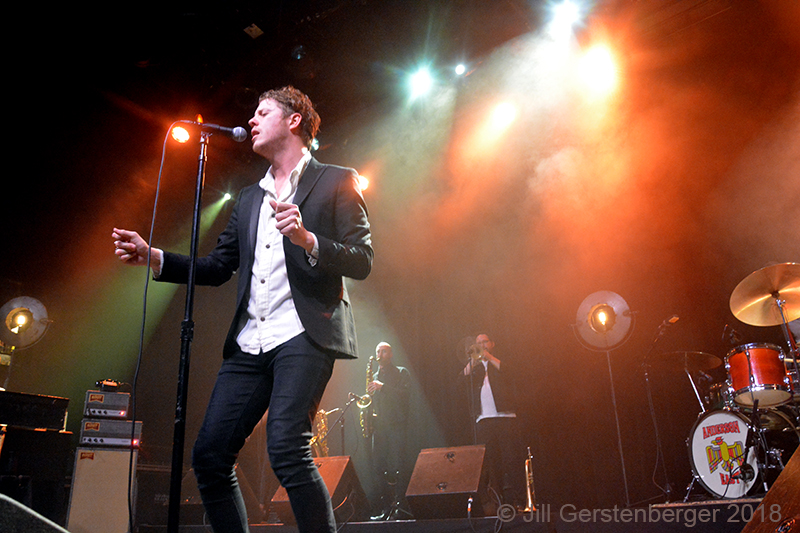 With that background, it would seem to be a no-brainer that East would forge his fame by tapping into the rich country music passion of his southern roots (he was born in Alabama).  However, given his gift of a powerful, effortless, soulful voice, East chose to cut his own path and make his name byre-inventing the southern-styled American rhythm and blues made famous by the likes of Donny Hathaway. 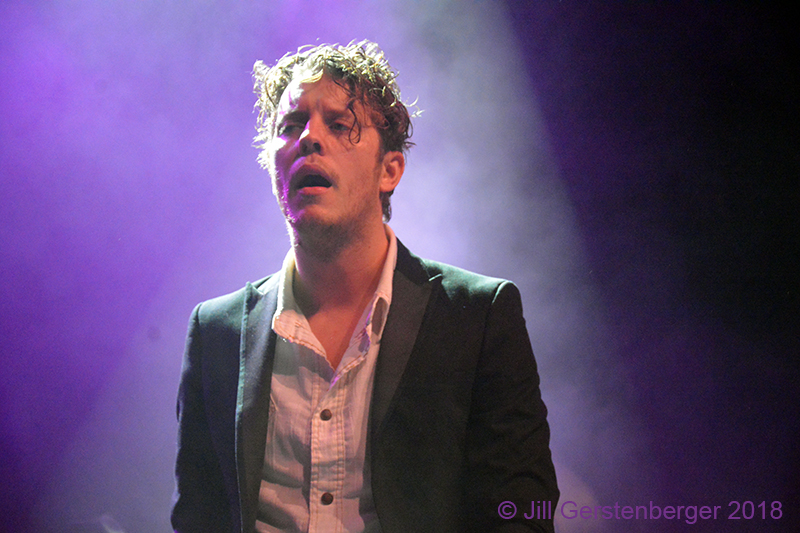 On this evening, East and his band, seven pieces with a horn section and background singers, looked the look of a soul / R&B revue, with the ensemble all outfitted in black and East out front nattily dressed in a black sport coat over a crisp white button-down shirt. 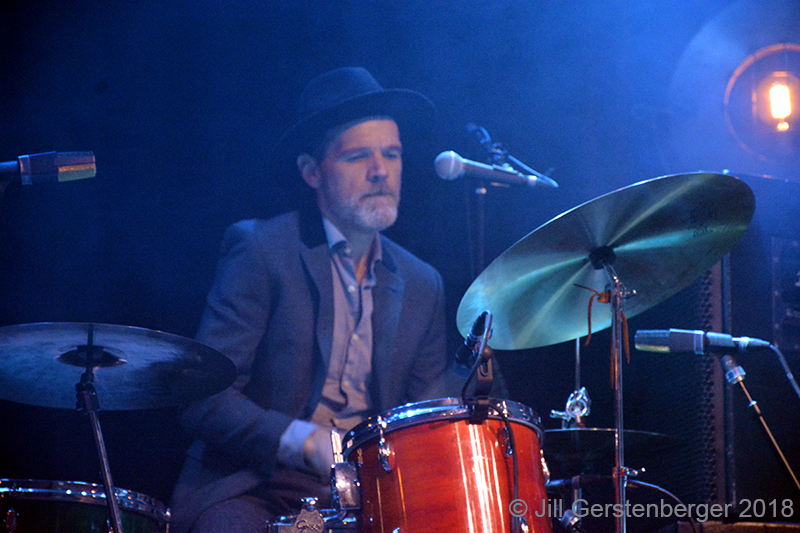 Not only did they look the look, they had the sound and they flaunted it from the first horn blasts of the set opener ‘Sorry You’re Sick,’ the Ted Hawkins dance floor shaker that East covers on his 2018 release Encore (his sophomore effort) which has shown well on the US Billboard charts. 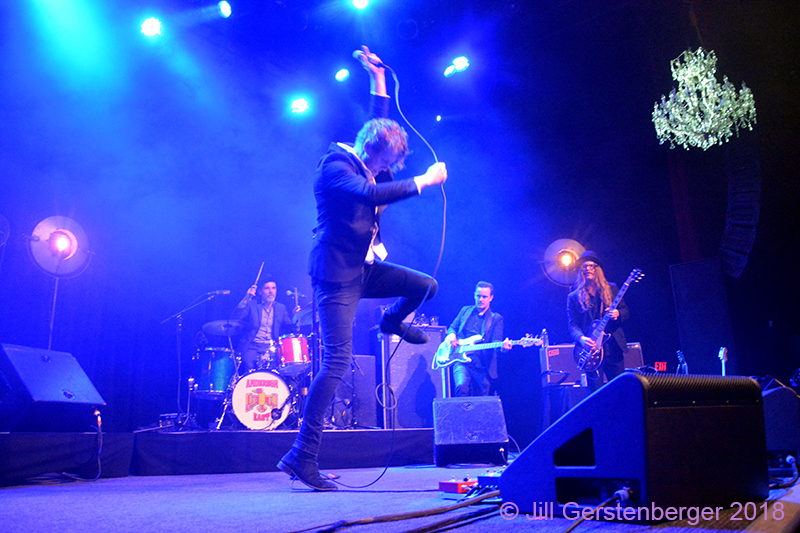 As soon as the set opener ended, it was noticeably warmer in the venue and coats and jackets were discarded throughout the packed Fillmore dance floor. Pausing a beat to greet his fans and thank them for coming out the band kicked into ‘Girlfriend’, a down home and dirty slice of funky soul that made throngs of females swoon like East was Sinatra during the 50s. 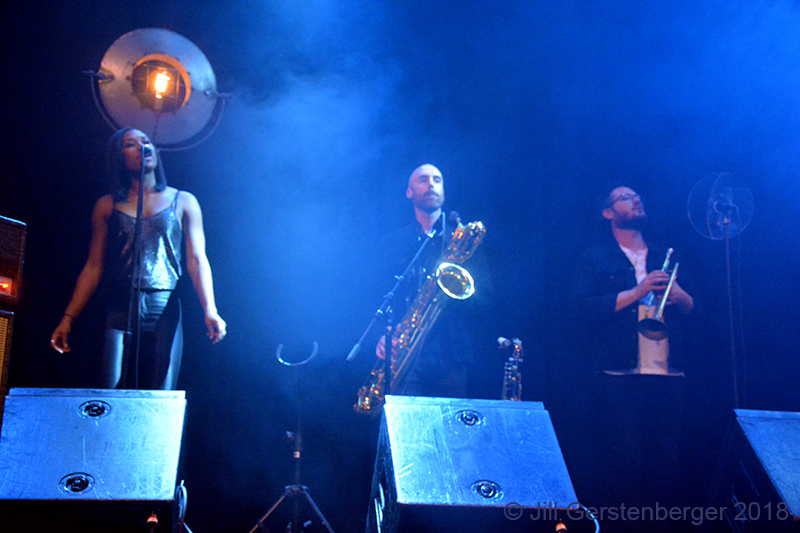 As he sings, East has a tendency to glide around the stage in a carefree shuffle, trading smiles with his bandmates. Not quite dancing, he totes his mic stand around with him as if it is a dance partner he is practicing with, crooning all the while. 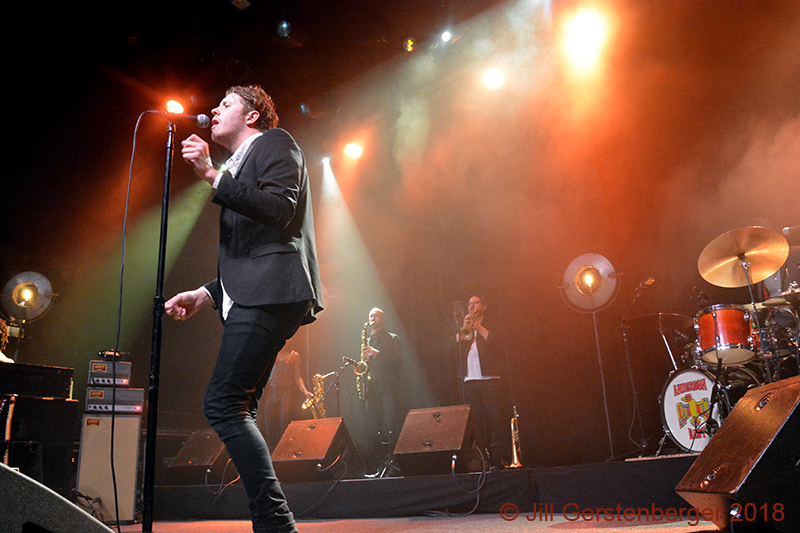 Anderson East seems to know where he is in the musical universe as well as where he would like to go. Drawing from an intriguing cross section of influences for his style and set list, East is always conscious of making the songs sound like they are his, shaping the sound to highlight his voice which is the star of the show. 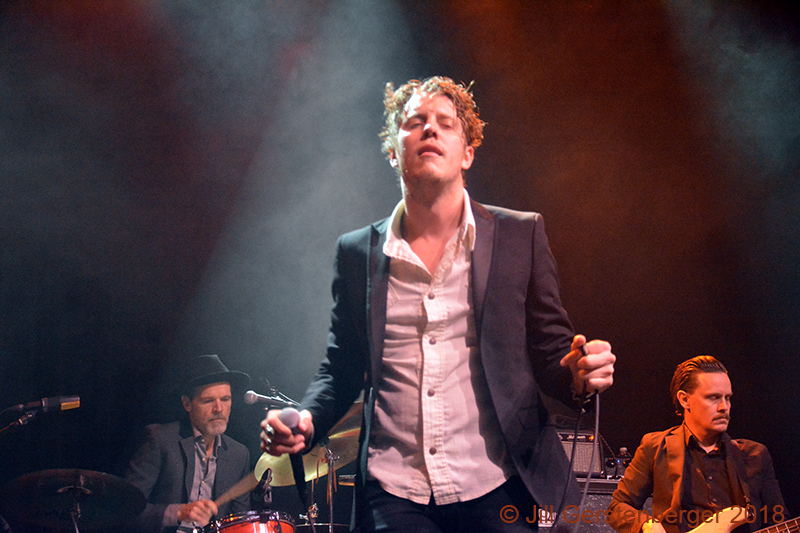 Whether covering Willie Nelson (‘Somebody Pick Up My Pieces’), Johnny Nash (‘I Can See Clearly’), or Mariah Carey (‘Always Be My Baby’), East and his band twist the notes and presentation to fit the southern soul and R&B mold which is their bread and butter. 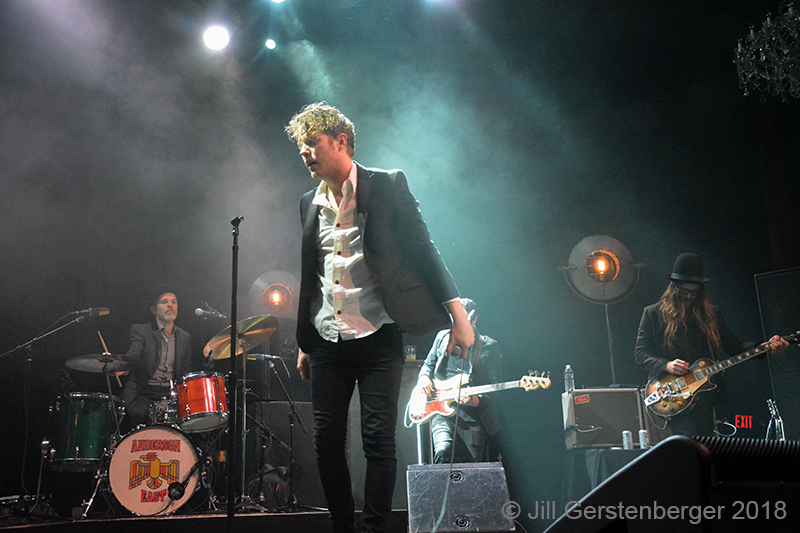 At the pinnacle of the set was the scorching hot single ‘All On My Mind,’ the jewel of Encore. This is a sweaty bump and grind seducer that he penned with Ed Sheeran, and East delivers it with a sure swagger that evokes the soulful growl of Joe Cocker. Imagine ‘You Can Leave Your Hat On’ with more polished modern production, and an even more deliberately serpentine sexy groove, and you will catch the vibe. 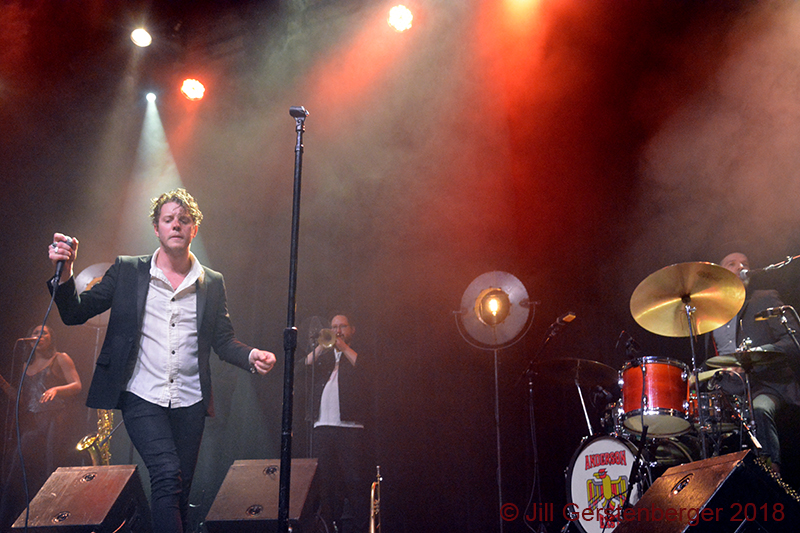 When the band struck the final note, the crowd erupted, and East noted his reverence for the crowd and the venue in which he played. “Think of all the great bands that have played here…all the unreal history on this stage. It is amazing to be here and an honor to share this evening with you.” 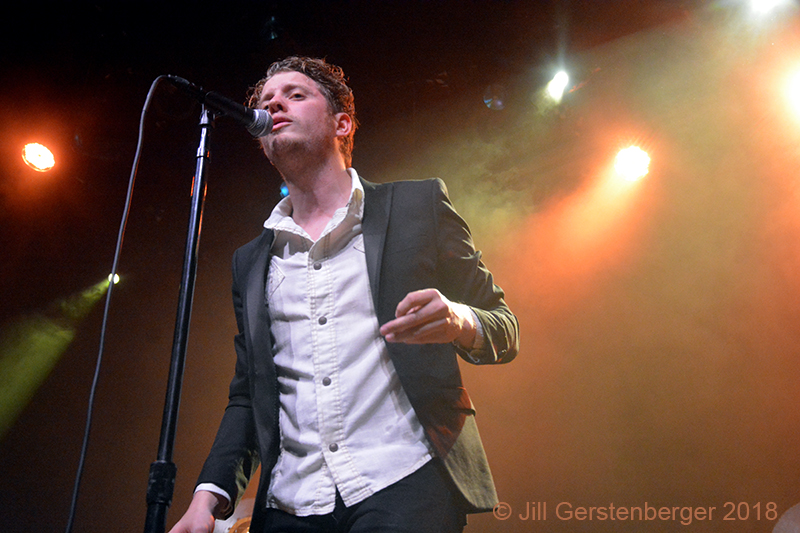 The only real divergence from the soul / R&B recipe that was present in the set was the ode to East’s grandfather ‘Cabinet Door’ (which closes the Encore recording). On this unabashed and inconsolable tribute, East was center stage with just his voice and a guitar, and the soul R&B jump that punctuated the set was replaced by a mournful ballad drenched in the Americana country flavor of his home state. 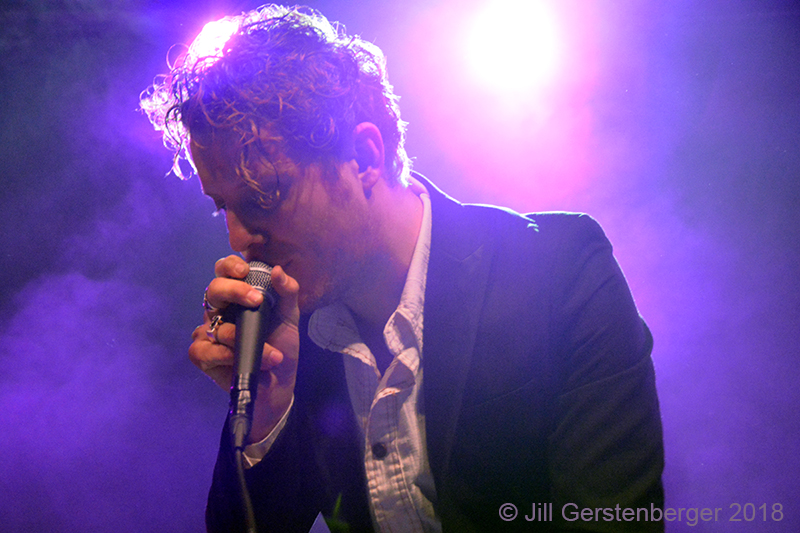 With this peek behind the curtain, East showed what would have been in an alternate universe had he followed the path to a country music career. It was a poignant and vulnerable look into Anderson East, however the stripped-down country nature was such a stark contrast to the rest of the evening that the crowd did not really know how to react. 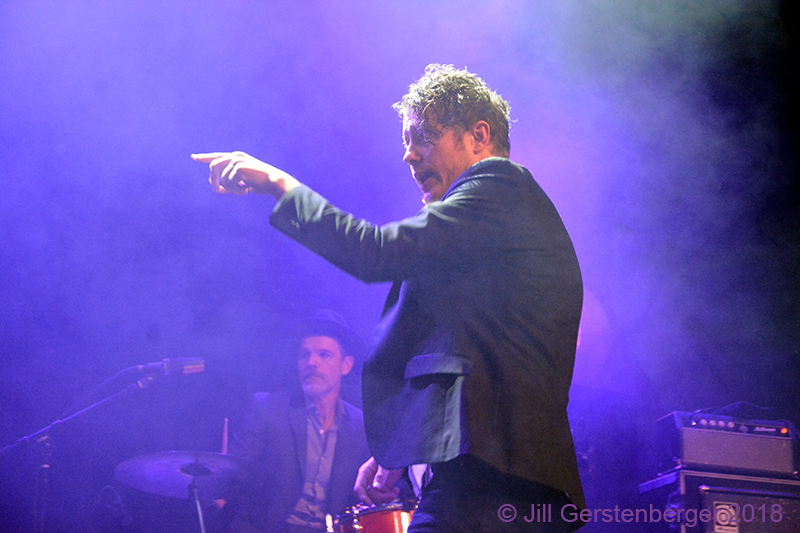 Actually, this was probably the most difficult song for East, being that he flipped the script. He could have stayed in the lane of his party soul revue, but he wanted to show the other side of his southern roots, and he did so very well. No matter what style he chooses, Anderson East is southern at heart. 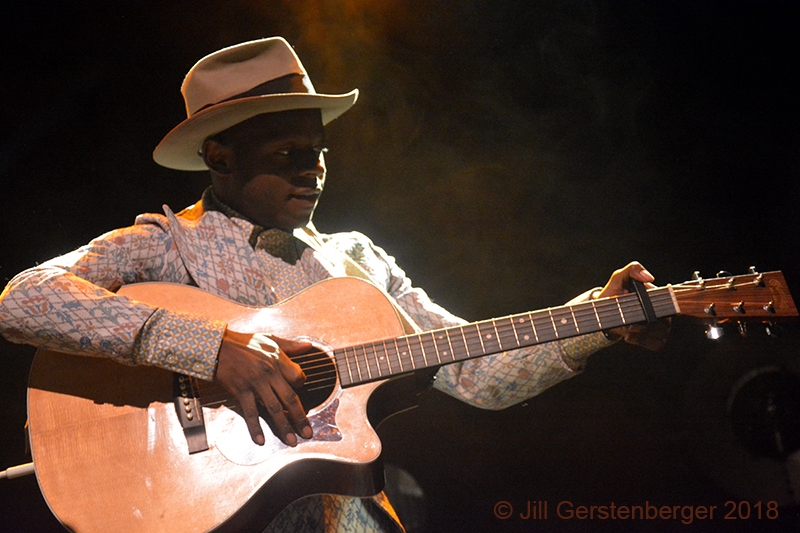 Opening the night was J.S. Ondara, a one man show from Minneapolis. Wearing a sharp white suit and matching hat, it was just him, his guitar, and his laid-back sense of humor. Ondara endeared himself to the crowd by telling jokes and bonding with the folks in the front to power through sound problems at the top of his set. 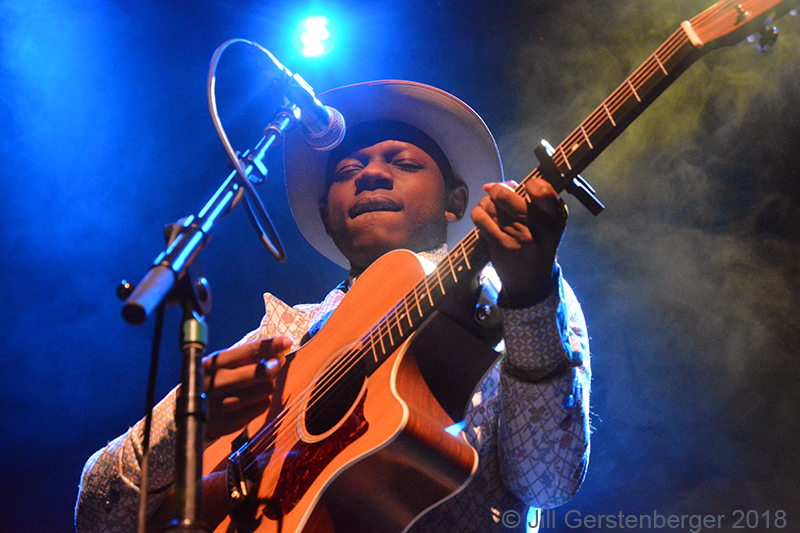 Once he got going, Ondara enthralled the audience with a troubadour style delivery that is reminiscent of Bob Dylan, only with a sweet and lonely voice that can hit highs in the pocket of Tracy Chapman. Of particular note were ‘Without My Baby,’,\ ’20 Times Smarter,’ and ‘Television Girl’. If this acoustic style is of interest, J.S. Ondara is definitely worth a listen.

Find out more about Anderson East on his website.