Danceable electronic music dates over fifty years, with innovators like Kid Baltan, and Delia Derbyshire working in labs without the benefit of live audiences, with music tending towards extraterrestrial (Derbyshire first came to light with the Dr. Who theme) and the bouncy. It was a few years before the music turned dark and broadened its audience, with Devo incorporating electronics into its quirky rock (listen to the brief instrumental break in “Jocko Homo”) and Pere Ubu, which considered itself a “dance band” at the time, torching the sound with Alan Ravenstine’s electronic chaos. (Ravenstine became a commercial pilot, a scary proposition after seeing him perform live.) Around the same time, Giorgio Moroder produced much more commercially viable music built on a base of electronics, eventually working with Donna Summer, among others, to produce some of the biggest hits of the disco years. Throw in Krafwerk, with its electronic “robot rock” and use of vocoders, and there’s a cornucopia of creative experimentation with synthesizers and drum machines. 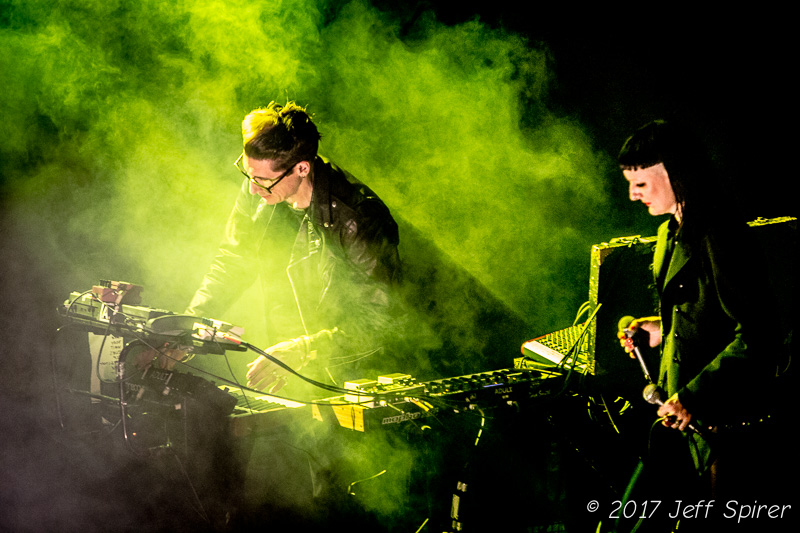 For a period of time, beginning in the 70s with Devo and Ubu turned up in the US and Throbbing Gristle, Cabaret Voltaire and Front 242 appearing in Europe, electronic bands that explored dark and challenging spaces appeared. Punk and electronics merged in some places, in others, prog rock themes and musique concrete conceptualism dominated. 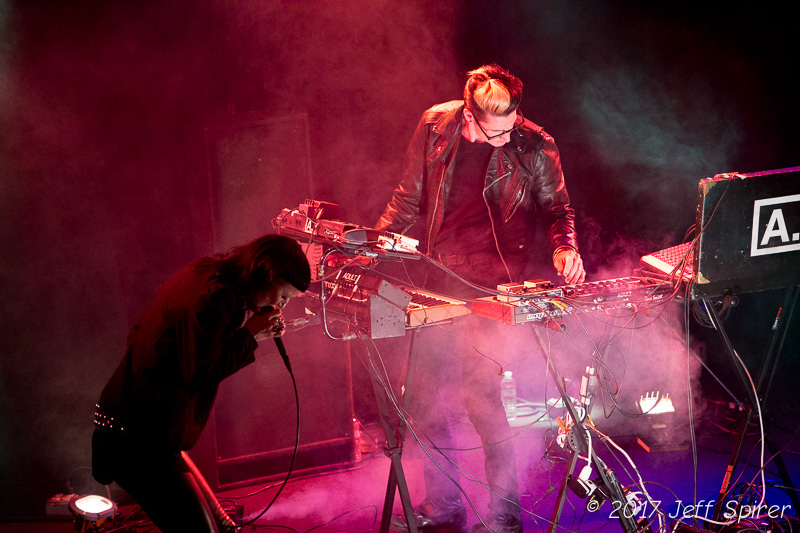 Fast forward to 2017 and electronic music has morphed into EDM, a catch-all for a number of sub-genres that often incorporate the more commercial elements of Moroder’s music without the charismatic and vocally talented Donna Summer out in front. The music is typically associated with drug use, and at EDM festivals, drugs and music compete in importance, much like at classic Dead shows. The result is often monotony, like at those Dead shows that transform with drug use. 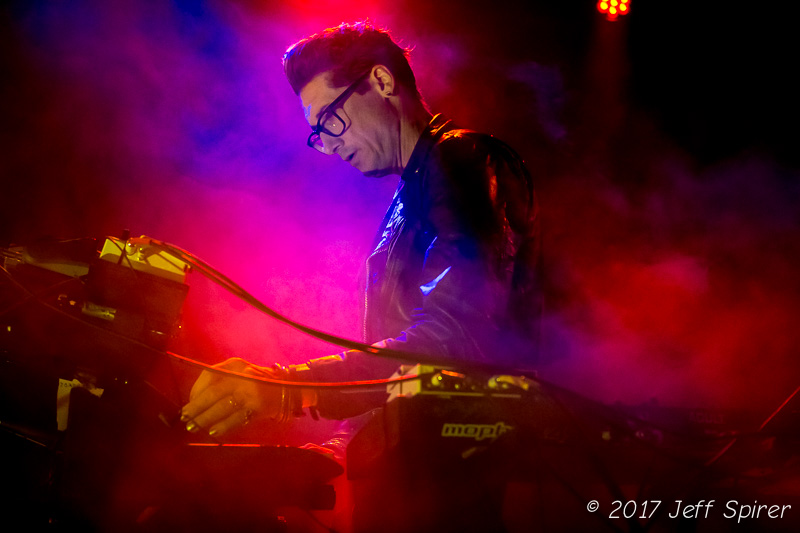 That’s not to say it’s all doom and gloom (joke). Take Adult., for example. For twenty years now, the duo of Adam Lee Miller and Nicola Kuperus, has explored the edges of electronic music where the mind gets taken places it may not have thought of going. Or didn’t want to go. The music has the beats but there’s a harshness, an instability that runs through it. Miller works inside an “L” of equipment. If he didn’t comb his hair, he might be the mad scientist left alone in the lab with the gear late at night. He occasionally looks up at the audience and sometimes looks at Kuperus, but mostly works his magic with his fingers on the knobs, buttons, switches, and keys. 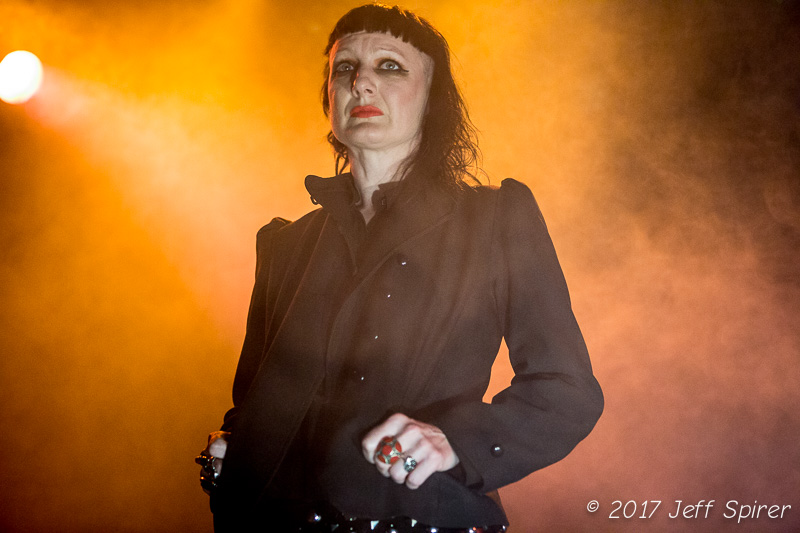 Kuperus doesn’t as much sing as punctuate, adding to the sounds Miller is creating. Phrasing seems short, as if the most important thing is just to hear it, not to follow a melody, hook, or even lyrics. Anyone not familiar with the recorded versions of the “songs” may not have any idea what the lyrics are, but that’s not necessary – the lyrics are not an integral part of the live show, as if Kuperus had her own keyboard with samples of her voice. Kuperus spoke occasionally between “songs” and sounded unexpectedly upbeat given the music. 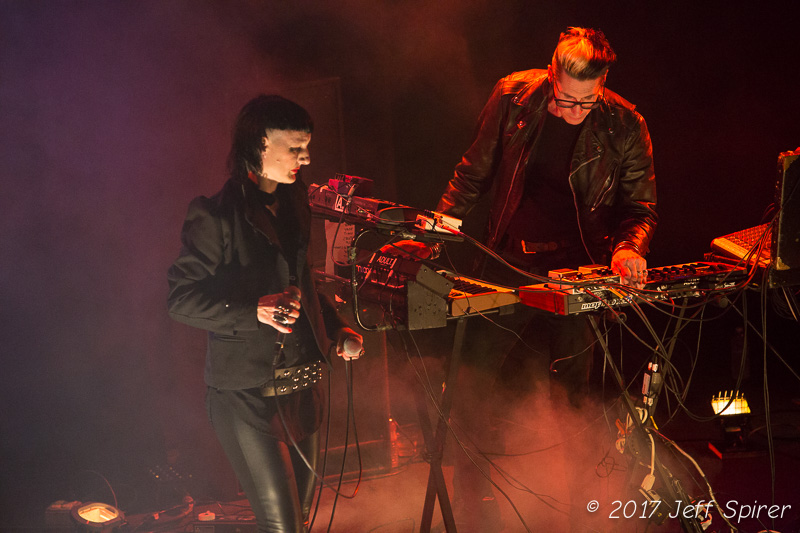 Oddly, listening dispassionately causes the Devo reference to come to the fore. It’s as if Devo had skipped the whole commercial thing and stayed inside Booji Boy’s head. The beats are somewhat disassociated and somewhat danceable – the harsh sounds and the “punctuation” from both the electronics and Kuperus’ voice part of that internal dialogue that must go on in that imaginary place. 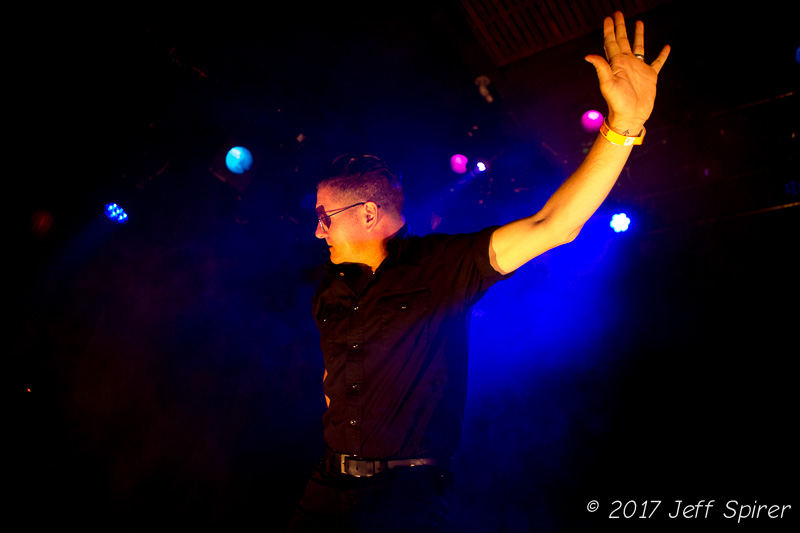 Adult.’s most recent album is titled Detroit House Guests, resulting from their collaboration project with a number of artists they invited including the remarkable theremin player Dorit Chrysler. Two of the “house guests” appeared at the show, Douglas J. McCarthy (Nitzer Ebb) and Shannon Funchess (Light Asylum). McCarthy appeared early in the set and probably should have been higher in the mix; he interacted vocally with Kuperus during his time on stage. Funchess appeared late in the set and was easier to hear, she engaged in some call-and-response vocals also. 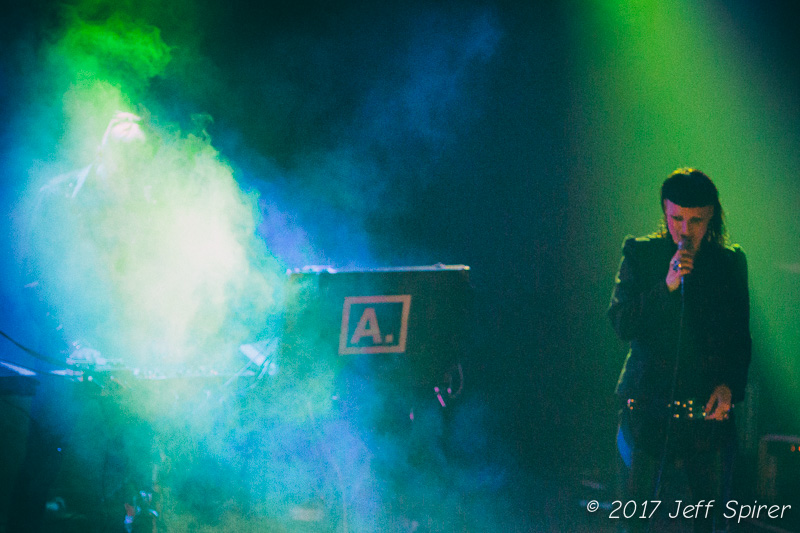 If there’s a criticism of Adult.’s performance, it’s that it could have been twice as loud, although most of the audience didn’t appear to have earplugs and might have suffered. It’s not that it was quiet but the visceral feel would have added to the sense of discomfort. Maybe at home when the neighbors are all at work… 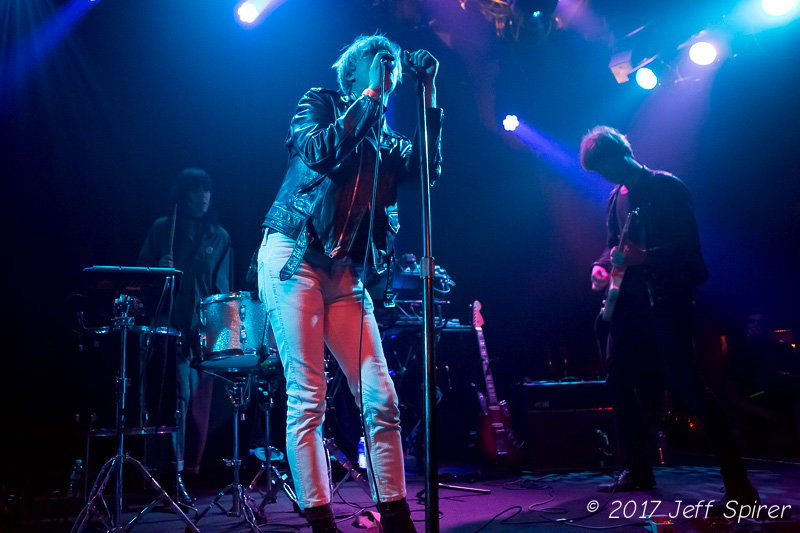 The big surprise of the night came from Sextile, a band with some songs on Bandcamp, a video for one of the songs, and a Facebook page online although they were selling their unreleased next album at the show. Little known outside LA, although hopefully appearing with Adult. and their album release will change that, Sextile had a punk-y no wave edge. Except for the opening song, “One of These,” the songs were driven by harsh and rough guitar stylings with occasional three-chord punk underpinnings. 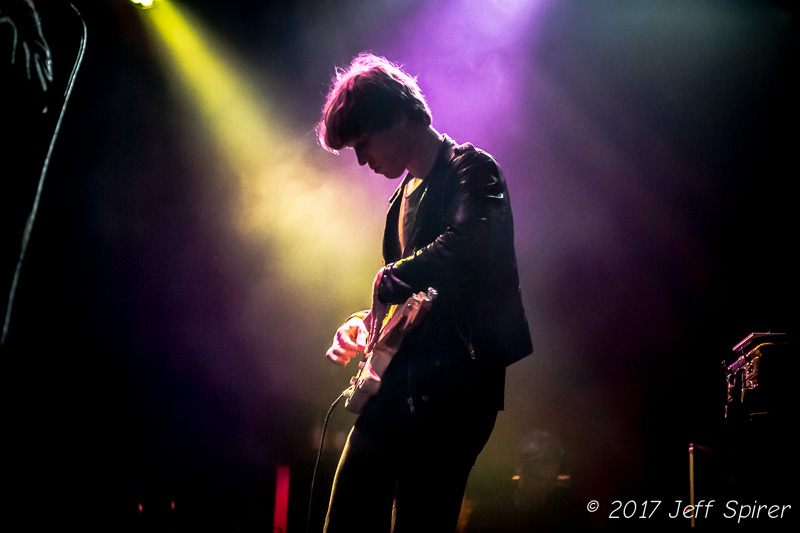 Heavily reverbed vocals sung with urgency and desperation by Brady Keehn reinforce the punk feeling, Brady also plays guitar on some songs. Drummer Melissa Scaduto stands behind her minimal drum kit and evokes Moe Tucker with her simple but driven beats. Cameron Michel plays guitar and synth, the guitar often played with destructive abandon. The band is rounded out by Eddie Weubben, who plays synth and bass synth. It’s difficult to convey just how exciting the Sextile loud show. 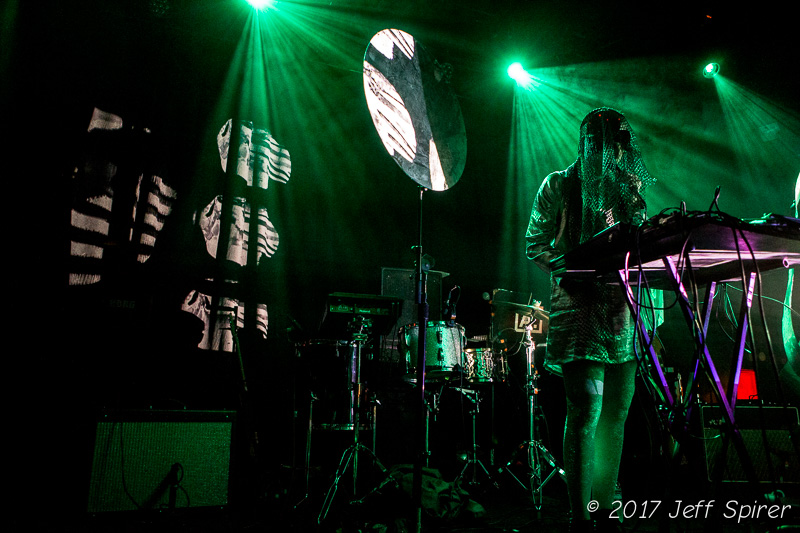 First opener Pod Blotz, a one-woman act, played electronics, sang once in a while, and banged on a piece of aluminum wrapped around a mic stand. Given the industrial noise Pod Blotz cranked out, the aluminum banging fit in perfectly. Her voice seemed intentionally indistinct alongside the electronic crush and beats. Pod Blotz was a striking image on stage, with a veil initially, then some other headgear that was probably stolen from a mad doctor’s lab, metallic props and lighting on a backdrop.

More info on Pod Blotz is on her Facebook page.