There’s blues and there’s The Blues. Blues is an uplifting music form with familiar chord progressions, call-and-response with voice and (typically) guitar, and raucous or plaintive solos by virtuoso musicians. Despite a smaller audience than in the past, it continues as a beloved form. The Blues is music that originates from the heart, from the gut. It may or may not follow the traditional structures, but it’s not about structure, it’s about emotion. And it may not be uplifting – it’s often pain without redemption. Practitioners of The Blues range from Robert Johnson to Screamin’ Jay Hawkins to Diamanda Galas.

When Adia Victoria hits the stage, it’s The Blues. 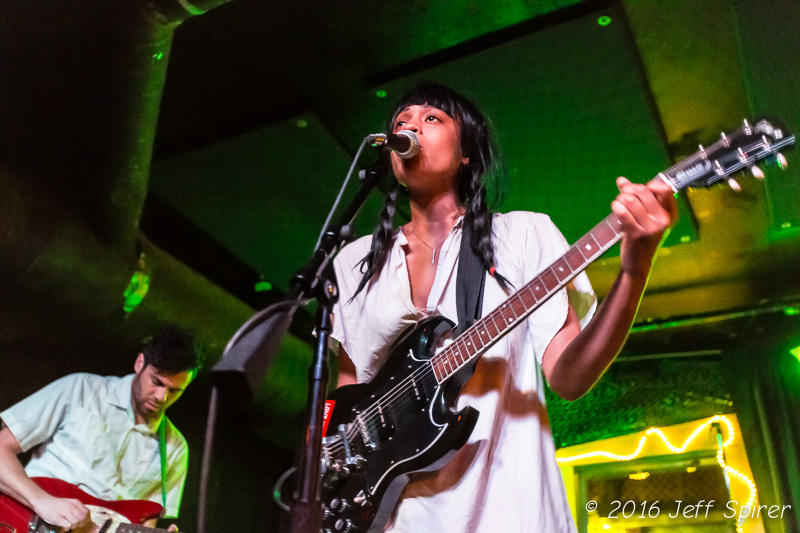 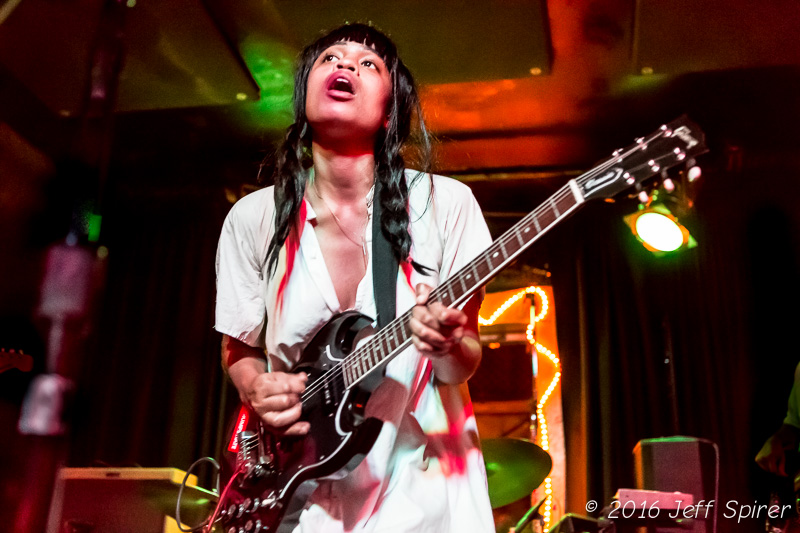 Victoria touches on long-time blues topics including breakups, which she mentioned, and the toughness of living in the South, but the way she does it feels like a trip into purgatory. Perhaps her darkest song, Howlin’ Shame, she dedicated to Trayvon Martin, which is certainly one of the darkest moments in 21st century America. She talked about Nashville, where the band currently resides, in unflattering terms, saying they avoided typical Nashville topics including trucks and tanlines, and then put up two middle fingers while saying “Fuck Nashville.” 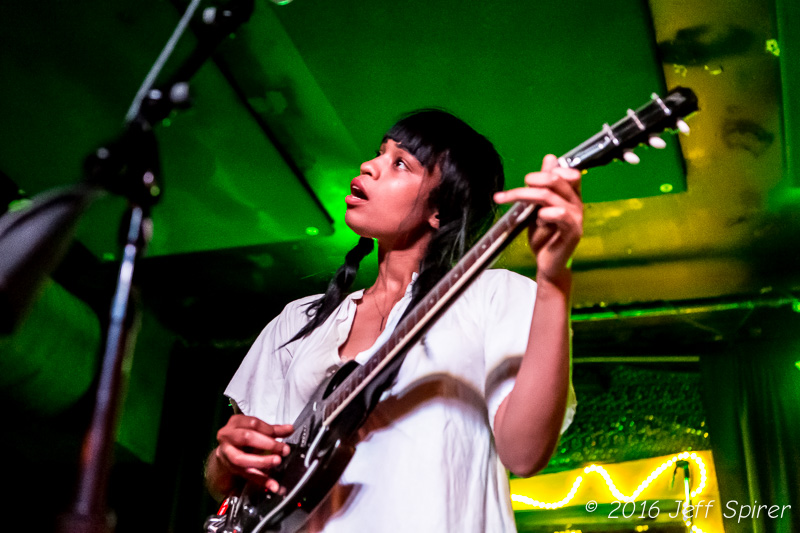 Victoria also talked about the Bottom of the Hill show being her first trip to San Francisco. She got a warm welcome from the crowd, as expected, and seemed genuinely happy to be in the City. 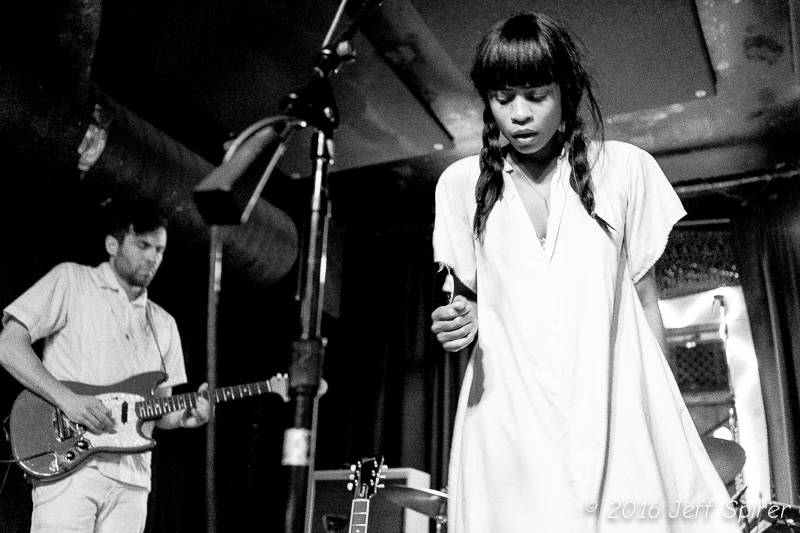 In her most poignant between-songs moment, Victoria talked about finding her life by finding the blues. It’s evident finding the blues worked based on the performance, it’s just as evident that there were demons driving the change. 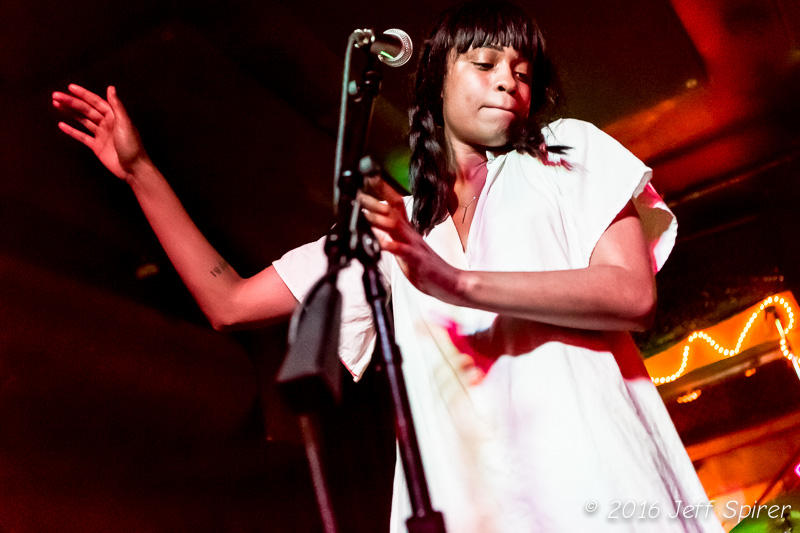 Victoria played guitar about half the show with a rawness approaching her voice at times. It could have been punk, or, given her voice, maybe a revival of the No Wave “movement” in late 70s NYC. The band, dressed in white as was Victoria (except for her red shoes), provided an appropriate backdrop with some unusual touches for music ostensibly blues. Guitarist Mason Hickman sometimes launched electronic soundscapes from his pedal board while providing some harsh guitar without self-indulgent solos. Drummer Tiffany Minton had a drum pad she sometimes used to add depth to the percussion. Bassist Jason Harris and keys player Alex Caress rounded out the band. The intermingling of modern electronics with traditional instruments for a blues band isn’t brand new – Fat Possum did something similar with R.L. Burnside’s recordings, but it is probably the first time the syncretism hit the road. 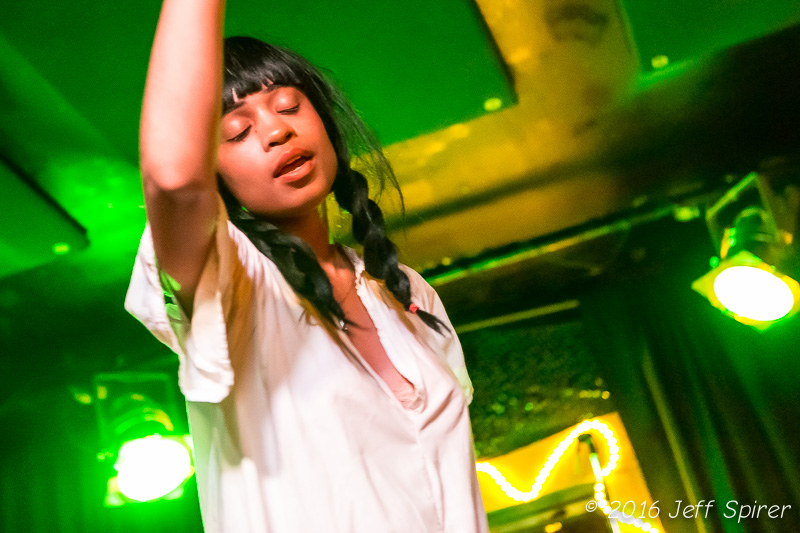 Adia Victoria’s performance at Bottom of the Hill was stellar. Hopefully she will return soon.

Eight Belles preceded Adia Victoria with skillful Americana/country/folk-rock. Jessi Phillips has a crystalline voice that is a joy to hear and the band provided a warm setting that kept her voice out in front. Although some the songs were a bit on the melancholic side, Phillips showed her sense of humor introducing her guitarist as a “shredder.”

Opener Skookum showed what would happen if Neil Young and Quicksilver Messenger Service met and had a bastard child. The band would have fit perfectly on the bill at the Fillmore in 1967, with a hard bluesy sound free of pretension and artifice. Skookum is a relatively new band from Oakland that is recording for the first time, watch for a review on SF Sonic when it is released.

For more information on Adia Victoria, check out her website.

Listen to Skookum on their Bandcamp page.