The Monday before Halloween saw the Rickshaw Stop play host to three female-fronted projects: co-headliners The Blow and EMA and opener Ah Mer A Su. This show felt very under the radar, coming in among all the events/shows that always accompany the Halloween season in San Francisco. 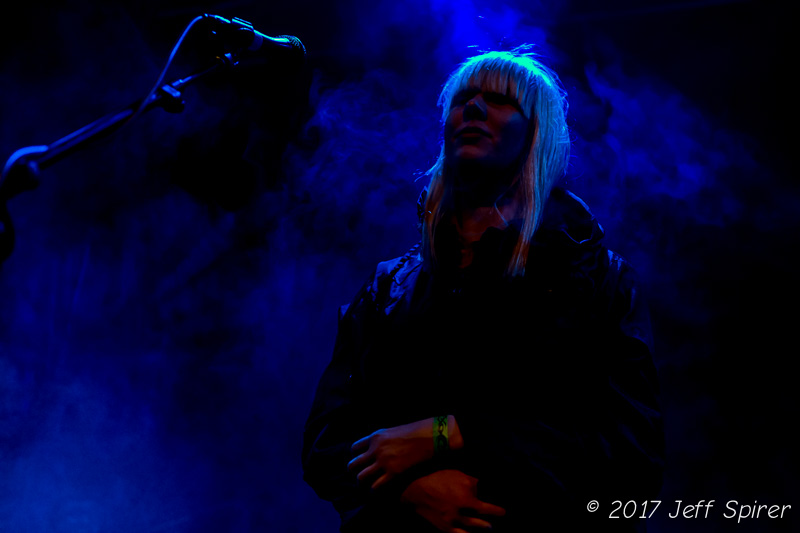 The buzz act was co-headliner EMA, named after the initials of founder Ericka M. Anderson. Hailing from South Dakota, and having played in Los Angeles, Oakland (with “folk-drone” band Gowns), and now based in Portland, this show can only be seen as a triumphant return. Since leaving Oakland, EMA has been written up in Rolling Stone and Pitchfork, played on David Letterman, and will be opening for Depeche Mode in Europe. Pretty good for somebody that when she was in Oakland and a substitute teacher, almost gave up the music life. 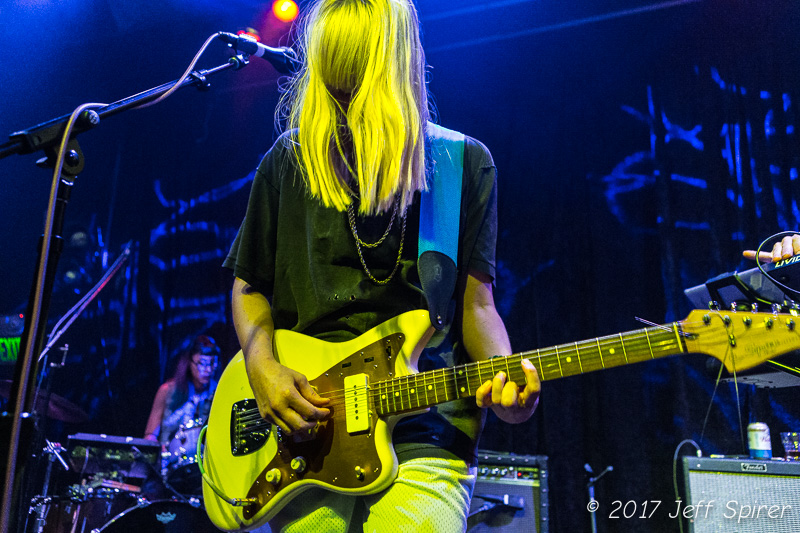 With three albums to her name (not counting the Gowns records), her stock in trade has been song pieces with lyrical vignettes implying a sense of dread, body harm, violence, and a sense of dislocation; all that good stuff with well-placed layers of sculpted noise or processed instruments. All of it performed with various vocal guises and a fairly minimal backing; what’s been so compelling is her ability to, in a few lyrical lines, conjure up a world with allusions to subjects like growing up in the sticks, technology, and politics, in unexpected and ever shifting ways. She has an ability to dwell in those uncomfortable places in her songs almost to the point of intolerability for some. Sonically, one can hear the influence of Nine Inch Nails, the abrasive production of hip hop producers like El-P (half of Run the Jewels), and vintage electronic experimentalist like the English band White Noise from 1969. 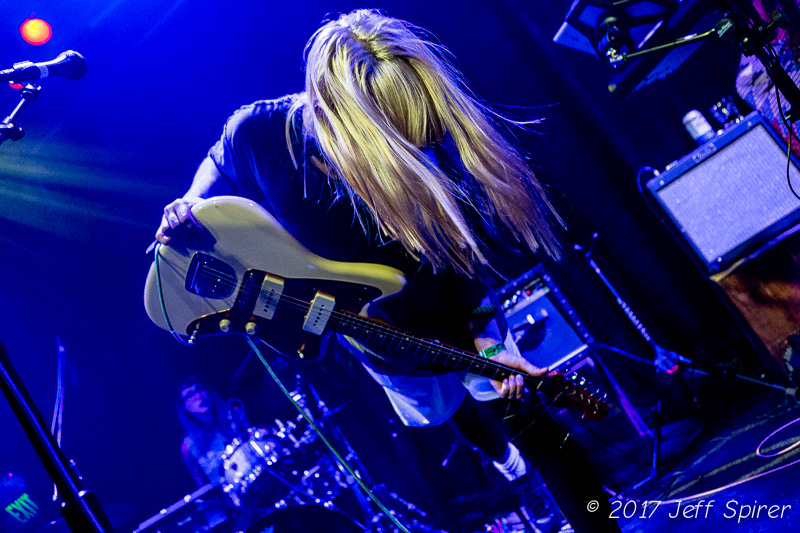 One can say that she can be found in that continuum of angst-filled artists, e.g., Kim Gordon-Kurt Cobain-Courtney Love, who has perfected the slow burn and the cathartic yell dualism Though in EMA’s case, she spends more time in the slow burn end of the spectrum. 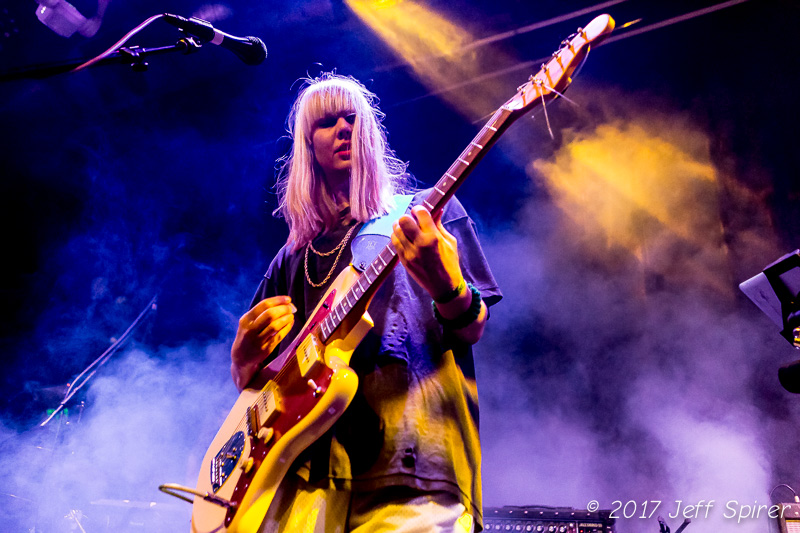 On this Monday night, EMA led a three-piece band consisting of long time collaborator Leif Shackleford on keyboards/violin/bass and drummer Susan Lucia. For the shake of a live performance, naturally much of the carefully placed ambience and effects of the record have been stripped down to a more rock orientation and indeed Ms. Anderson does rock. She stalks the stake much like the aforementioned artistes (and we should also add Kat Bjelland of Babes in Toyland to this list), playing guitar sometimes, doing more forceful iterations of her songs, Shackleford, even with a massive finger splint from a recent injury, does a excellent job of providing the white noise and traditional accompaniment that’s essential to her songs. 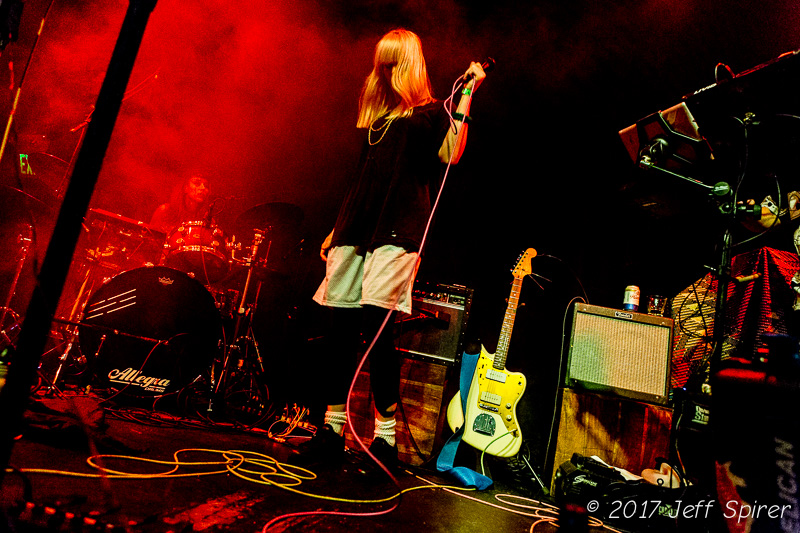 Even in this setup the songs’ natures are preserved: the biting hate/love poem “California” (dedicated to Oakland), “Butterfly Knife” got the full indie-rock treatment with Ericka doing some Sonic Youth-worthy guitar abuse (both songs are from her first solo LP Past Life Martyred Saints). Powerful performances of “Satellites” from The Future’s Void LP, “33 Nihilistic and Female” and “Fire Water Air LSD” from the Exile in the Outer Ring LP proved she could find the beating heart of those songs onstage effectively. She ended the set with two Gowns songs from her days in Oakland; EMA does score on many fronts and you would be well not to miss her next time, a captivating artist who’s got a unique approach.

Co-headliner The Blow uses a massive collection of modular synth gear, which took a massive amount of time to set up, and a micro-projector to assemble a mix of music and performance art. The Blow comprises Khaela Maricich and Melissa Dyne, both of who create the electronic environment; Maricich does the singing and talking. The “talking” is entertaining monologue between songs; sometimes the music seems incidental to Maricich’s vocal riffing, which incorporates stories about music, life, and sexuality. The micro-projector cast patterns on a screen behind the duo. The music is fairly light and pop-y, especially compared to EMA’s holocaust of sound, and the talks could become a bit trying at times while waiting for more music, but it was entertaining

Opening was local transgender artist Ah Mer A Su, who with her cheerful demeanor and Nina Simone inspired voice charmed the audience singing soulful and sometimes political pop music behind prerecorded tracks. Ah Mur A Su is a well-known performer in San Francisco’s queer scene; her addition to the preceding Portland-based acts brought a local element to the show.
Here is a slideshow with more photos of EMA by Jeff Spirer:

Read the SF Sonic review of EMA’s Exile in the Outer Ring here.

Find out more about The Blow here.