In support of the new season of their critically acclaimed cartoon Mr. Pickles, the Adult Swim-sponsored Thrashtacular tour rolled into San Francisco on Sunday night, with Exodus, Municipal Waste, and Hellfire each delivering blistering sets to the delight of the sold-out crowd. 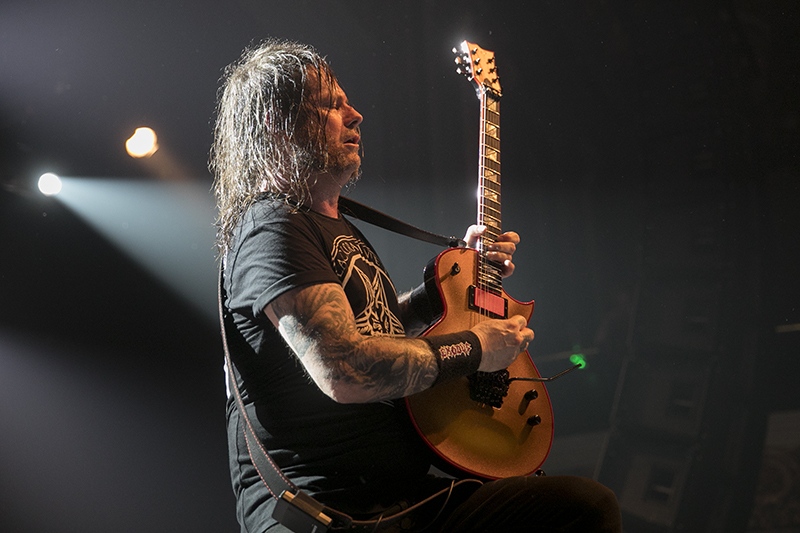 Exodus headlined the evening with another pummeling set, giving their hometown fans plenty of warp-speed versions of their classic songs along with plenty of new cuts from their most recent release, Blood in, Blood Out. As the lights dimmed and the opening to “Bonded by Blood” blared over the PA, the crowd began to get restless as a mosh pit began to form as the band strode onto the stage to blast through the opening guitar riff. 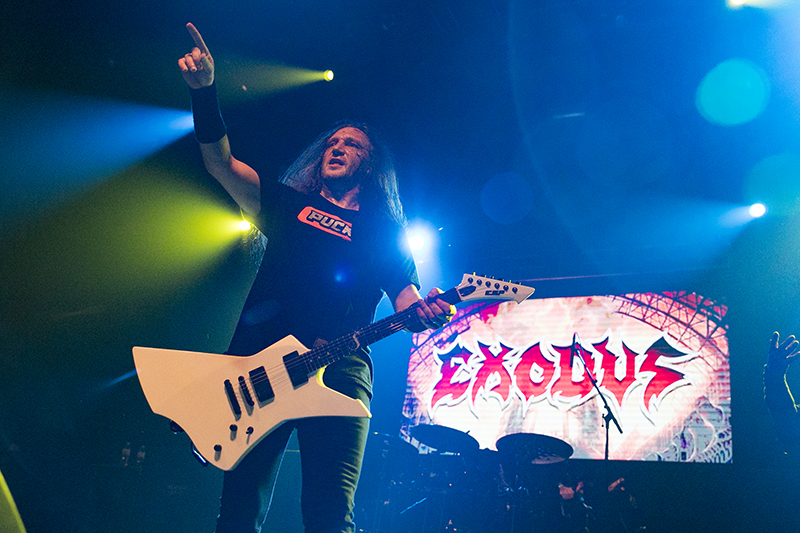 After that it was game over as the packed house was hyped up from Municipal Waste and Hellfire; bodies flew around the mosh pit, and some brave souls even managed to evade security and make it up on stage for a proper stage dive into the crowd. Lead singer Steve “Zetro” Souza interspersed his full-throated vocal roar with plenty of encouragement to the crowd to mosh harder and faster. 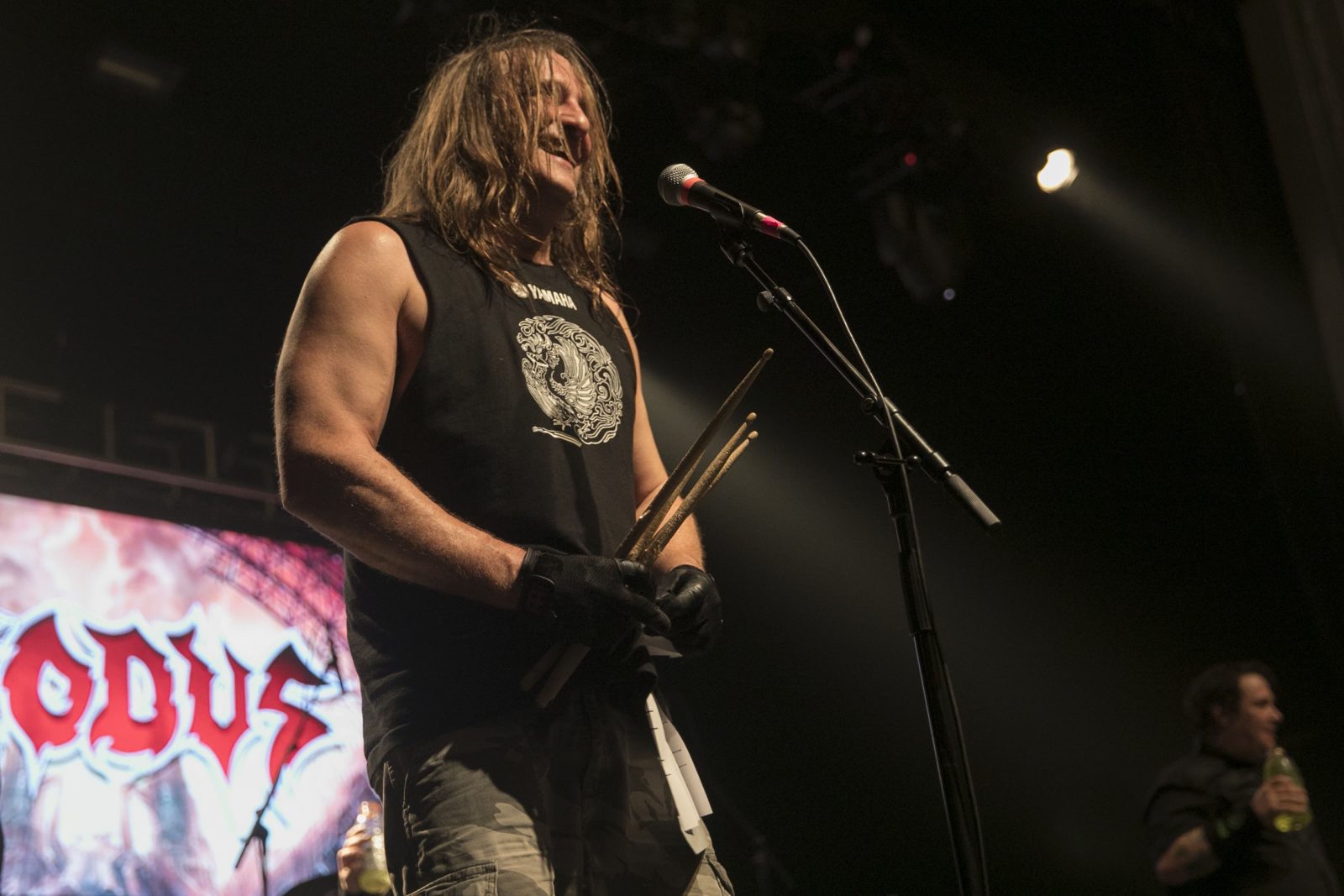 After a couple of mid-tempo songs (a relative term), Exodus picked things up again by ripping into an old classic in the form of “Metal Command,” a song anchored by the overpowering drum work of Tom Hunting and the breakneck guitar riffs of Lee Altus and Gary Holt. Towards the end of the concert, the band ripped through an inspired rendition of “War Is My Shepherd,” another scorching slab of thrash metal that saw Zetro deliver his most ferocious and rabid vocal performance of the evening, with his son Cody Souza coming on stage to sing some guttural vocal lines during the song’s conclusion. 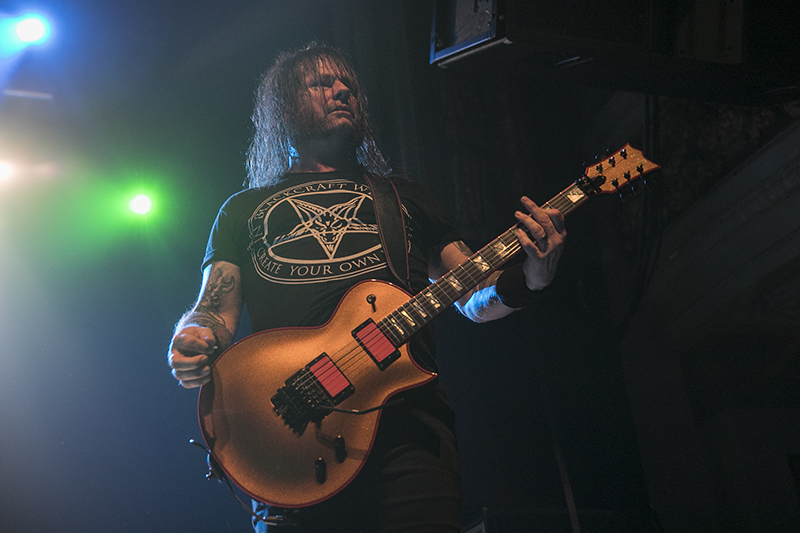 Exodus finished the night out with a particularly impressive rendition of “Strike of the Beast,” with Zetro splitting the crowd into two opposing sides to create a wall of death at the start of the song. As you could imagine, a wall of death consists of two walls of fans running into each other at full speed, and the wall of death for “Strike of the Beast” was particularly intense as it immediately dissolved into a frantic mosh pit for the remainder of the song. Exodus remains one of the must-see acts in metal, capable of delivering intense performances that are just as good as bands half their age.

Municipal Waste has become known in the metal scene for being one of the most energetic and fun bands around, something they certainly lived up to on Sunday night. The band’s sound is based on incredibly fast guitar and catchy riffage and a tight drum/bass backing to compliment the aggressive vocals of Tony Foresta, and it lends itself incredibly well to crowd interaction.

The group began their set with the speedy “Breathe Grease,” igniting a non-stop mosh pit for the remainder of their performance. Foresta was in a jovial mood, joking around with the crowd in between songs and encouraging the audience to go crazy, something they took to heart as the fan interaction was particularly inspired.

A few songs later the band rolled through the cutting thrash of “Unleash the Bastards,” a short but sweet blast of punk-inspired metal that featured plenty of tasty guitar flourishes from Ryan Waste and Nick “Nikropolis” Poulos. Municipal Waste managed to kick up the intensity even more with the next song, the fan-favorite “Sadistic Magician.” Beginning with a sweet bassline from Philip “Landphil” Hall, the track is, for lack of a better word, fun. Combining catchy guitar work with a sing-along chorus the song incited a mini-riot in the mosh pit, with fans going nuts.

Since Municipal Waste songs are relatively short, the band had no trouble playing plenty of raucous material and keeping the bodies flying around the mosh pit. To finish, the band played their customary closer, “Born to Party” a piece of supersonic thrash metal that saw the packed house chanting along to the chorus and taking to the air to crowd surf and stage dive. With so many fun songs, it was a fantastic performance from Municipal Waste and a great way to warm up fans for a headlining set from Exodus.

San Francisco based metal band Hell Fire opened the night up with a set of classic sounding metal. The band’s sound recalls classic 1980s metal such as Judas Priest and Angel Witch. Driven by the tasty guitar work of Tony Campos and the high-flying vocals of Jake Nunn, Hell Fire sounded inspired from the first notes they played, intent on blowing the audience away with some hard-edged guitar riffs and soaring harmonies. The highlight of their set came in the form of “Destroyers” a song that was stacked to the roof with searing guitar work, delicate harmonies, and some snappy drumming from Mike Smith, along with a short but tasty bass solo from Herman Bandala.

Check out this slideshow with more photos of Exodus and Municipal Waste by Raymond Ahner:

Setlist: Bonded by Blood | Blood In, Blood Out | Iconoclasm | And Then There Were None | Fabulous Disaster | Body Harvest | Metal Command | A Lesson in Violence | Blacklist | War Is My Shepherd | The Toxic Waltz | Strike of the Beast

Find out more about Exodus on their website. http://exodusattack.com/