Sandwiched between weekend performances at Coachella and the release of their latest record, Eat the Elephant, A Perfect Circle came to the Events Center at San Jose State on a Wednesday night to wow the audience with an impressive seventeen song set that spanned their entire recorded output. As the lights dimmed, the drummer took his position on the drum riser, playing a snappy drum beat as Greg Edwards took his spot on the opposite side of the stage to play a dreamy piano figure as the enigmatic Maynard James Keenan strode to his platform in the back of the stage. The trio performed a stunning rendition of the title track to the new record, “Eat the Elephant,” as guitarist Billy Howerdel came onto the stage, supplying some echo-drenched guitar lines in the background. 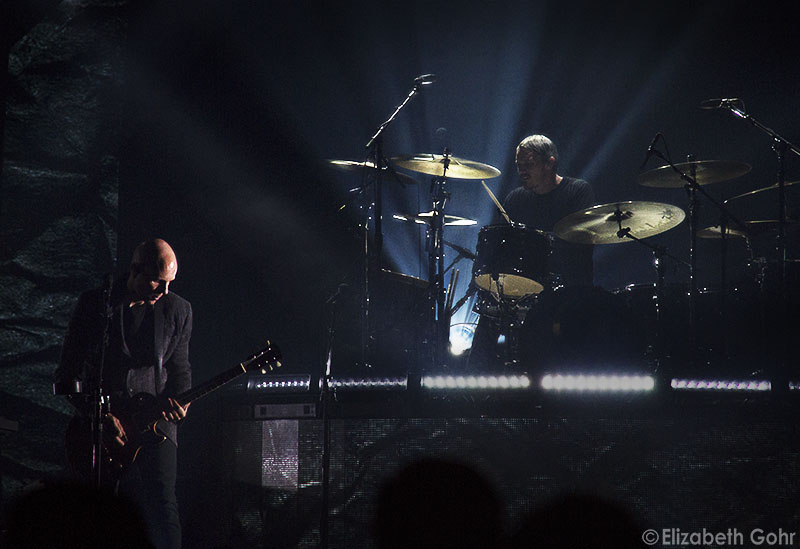 As per their new policy, no photos or videos were allowed from the crowd, turning what is normally an audience awash with smartphones into a silent black sea. Towards the end of the song bassist, Matt McJunkins came on to the stage as the band shifted gears into another provocative track from the new album, the anthemic stomp of “Disillusioned.” Riding a slithering drum and bass groove, the song saw Keenan in classic form, weaving in and out of the mix with his emotional vocals. What makes Keenan so captivating in a live setting is his ability to cover such a wide emotional range, from gentle and graceful to stormy and furious. 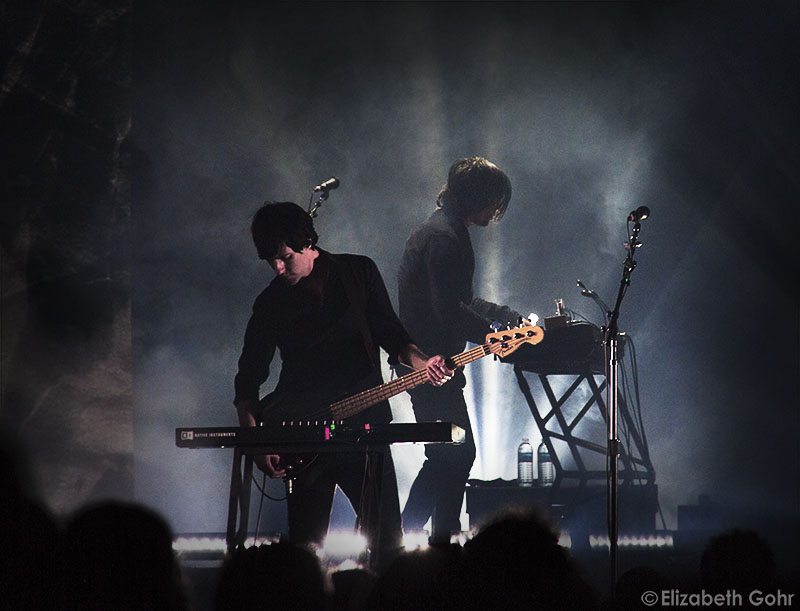 After this, A Perfect Circle worked through an inspired reading of the classic song “Weak and Powerless,” a song anchored by plenty of winding guitar passages from Howerdel and a driving bassline from McJunkins. The band had clearly put a great deal of thought into their light show, as the kaleidoscopic blend of colors matched the changing intensities of most songs. A Perfect Circle then changed gears in significant fashion as they tore through another new song: the uplifting rock of “So Long, and Thanks for All the Fish.” Arranged as a stomping rock anthem, the piece relied on one of Howerdel’s sweetest riffs, a nifty little ascending guitar figure that reverberated throughout the venue. 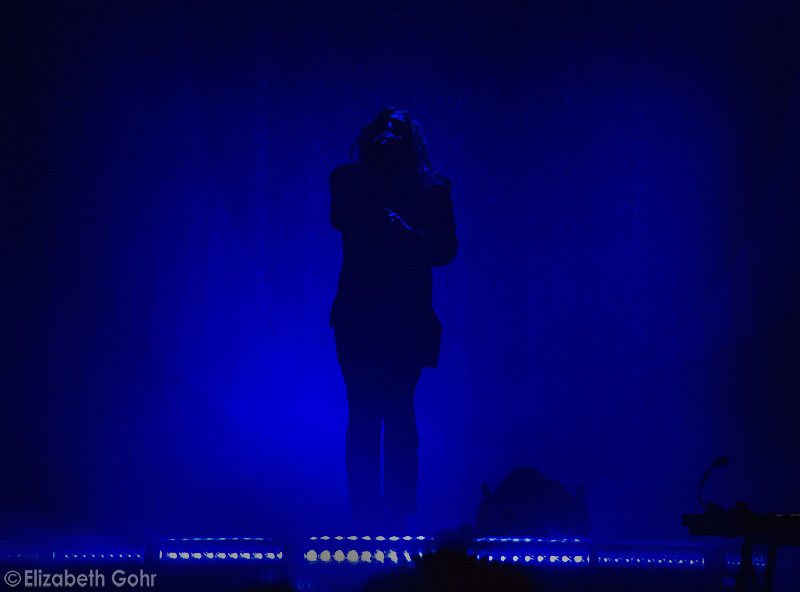 The band returned to more classic material next, in the form of the jagged dissonance of “Rose” and the surging metal of “Thomas,” two songs from their first album Mer de Noms. Both tracks made great use of the interplay between Keenan and Howerdel, who have lost none of their magical chemistry in the years since A Perfect Circle’s first hiatus. A few songs later the band rolled out more new material, performing three songs from Eat the Elephant before throwing a curveball in the form of the grinding industrial soundscapes of “Counting Bodies Like Sheep to the Rhythm of the War Drums,” which gave everyone in the audience time to catch their collective breaths before the group picked up the emotional intensity to close out their set. 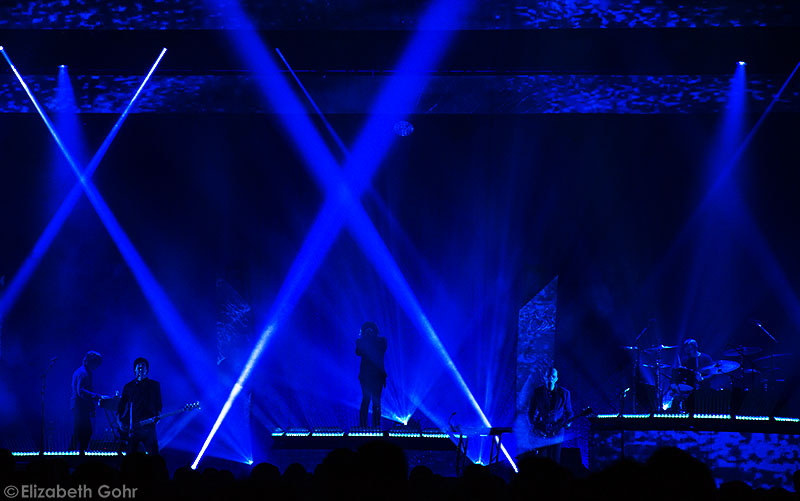 A few songs later, A Perfect Circle ripped through the lead single from Eat the Elephant, “The Doomed.” The song blended crushing heavy metal guitar from Howerdel and Edwards along with plenty of dreamy electronica-laced background soundscapes as Keenan once again took center stage. A scathing criticism of the current state of political affairs, “The Doomed” proved to be one of the big highlights from the night, cranking the intensity up only to dial it back down before finishing with a flourish. 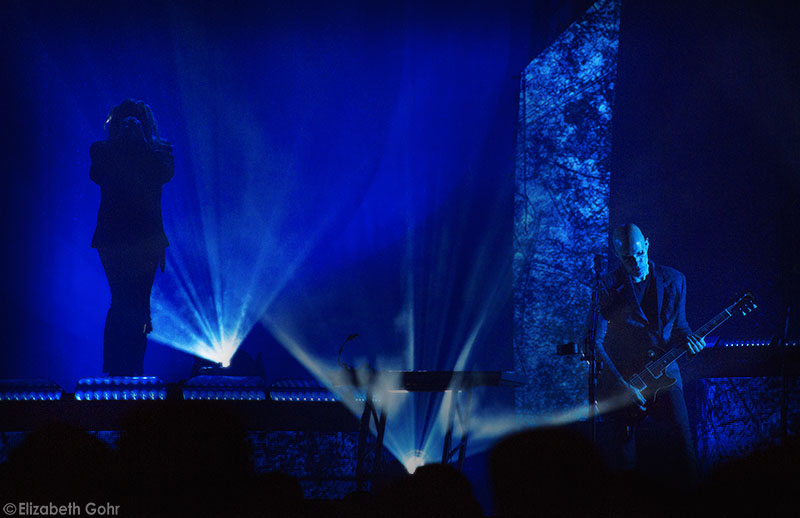 Eventually, the group closed out the night with a gripping version of the new song “Feathers.” Like many of their great songs, “Feathers” covers a wide array of emotional ground, from delicate piano to atmospheric guitar. What continues to make A Perfect Circle such a captivating band to see live is their ability to strip the music down to its raw emotional core, to bask in it and deliver that directly to the audience. The song eventually reached its climax, ultimately fading out with one last evocative vocal line: “May they all be feathers.” 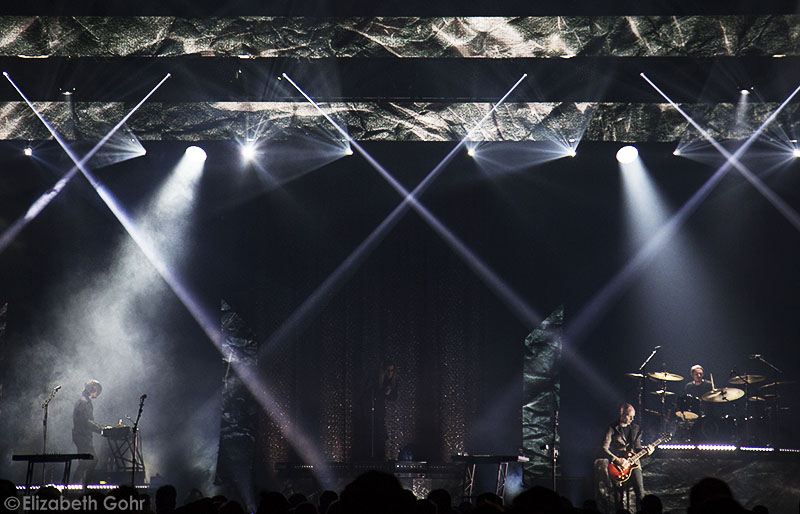 While Keenan may be more well-known for his work in Tool, A Perfect Circle is equally capable of delivering the goods live as they did on Wednesday night.

Setlist: Eat the Elephant | Disillusioned | Weak and Powerless | So Long, and Thanks for All the Fish | Rose | Thomas | People Are People (Depeche Mode cover) | 3 Libras (All Main Courses Mix) | The Contrarian | TalkTalk | Hourglass | Counting Bodies Like Sheep to the Rhythm of the War Drums | The Outsider | The Doomed | The Package | Gravity | Feathers

Find out more about A Perfect Circle here.