SFFD was on high alert on Market Street as Judas Priest torched the Warfield just in time for the recent 420 celebrations. The founding fathers of heavy metal delivered the goods to a wall-to-wall packed house of rabid rockers, putting on a heavy duty show with a buzz-worthy anticipation befitting the return of metal god Rob Halford and the current incarnation of the Priest. 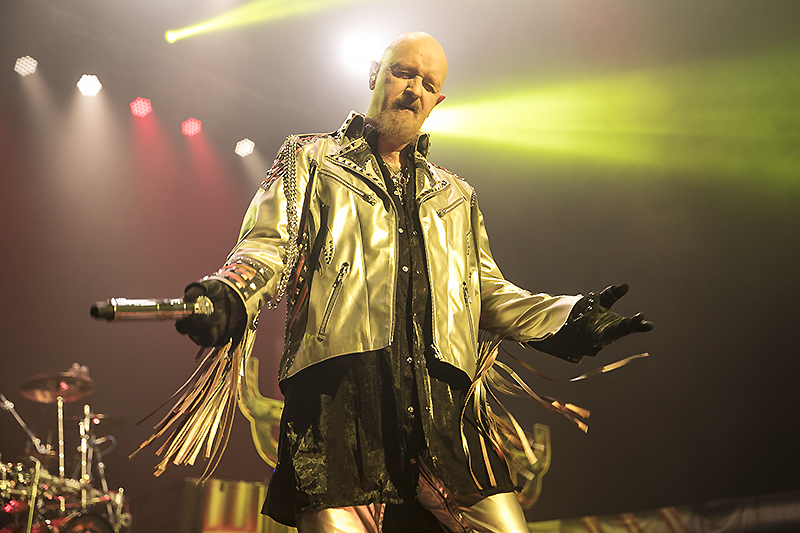 Touring in support of their latest recording Firepower, Halford and company (drummer Scott Travis, bassist Ian Hill, guitarist Richie Faulkner, and guitarist Andy Sneap) wasted no time in flexing the muscles of their new material by kicking off the show with the face melting title track of their superb new album. 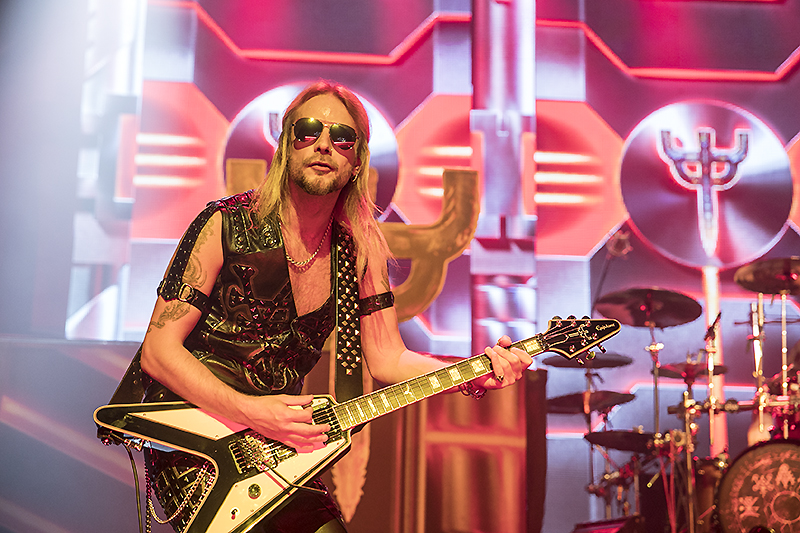 From Faulkner’s scorching opening riff, the swell of Halford’s trademark screeching falsetto, and the machine gun rhythms, the lead off to the show was altogether classic sounding Priest but wrapped in a shiny new package covered in sharp metallic studs. The opener lifted the room full of metal heads (aging vets and rookie Priest fans alike) and announced that Judas Priest is not there to just capitalize on their past accomplishments, they intended to take a flame thrower to the notion that they had abdicated the metal throne. 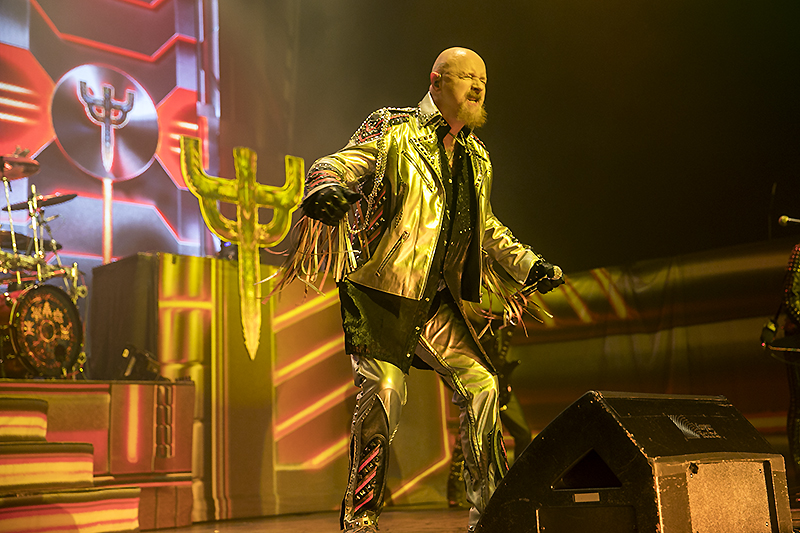 For 100+ minutes, Priest was a killing machine of rock, ripping through a set of tracks that traversed the catalog of their illustrious career. Early in the set the band turned back the clock and blasted out tracks that first established Judas Priest as a monster of a live band decades ago. 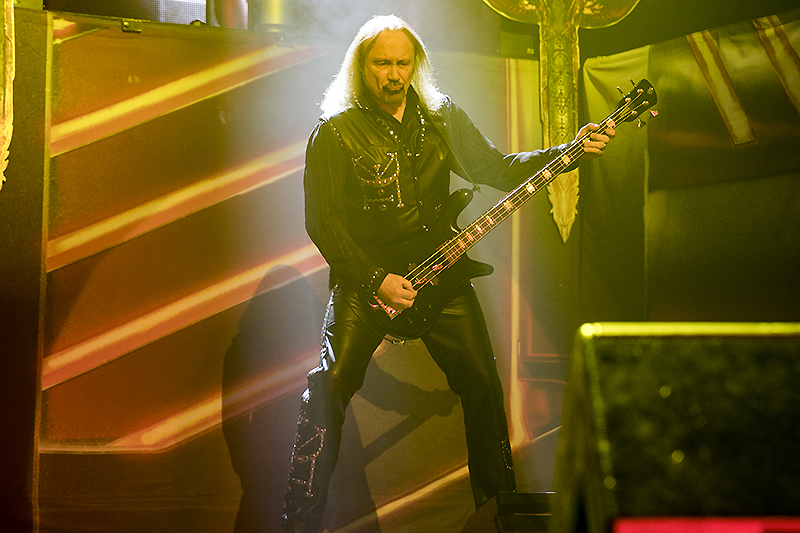 The four songs after the opener sent fans back to the late 70s and early 80s where Priest first forged the blueprint of what has become heavy metal. The way Halford and company waylaid the audience with blistering performances of ‘Running Wild,’ ‘Sinner,’ and ‘The Ripper’ evoked the same fresh energy of those songs on Unleashed in the East (1979). 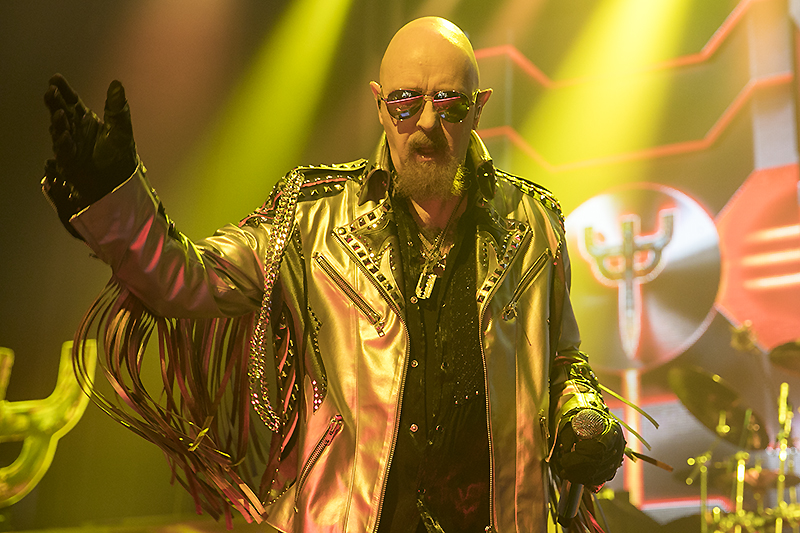 The difference is that the current band is older and wiser now, save for a new guitarist that was not even alive when Unleashed first released. Despite the debate that still swirls amongst Priest fans regarding long time axe man KK Downing’s departure, there is no denying that Richie Faulkner is an absolute badass of a lead guitarist. Whether on the early material, or the new songs, he dropped jaws all night long with his mind-spinning solo work. 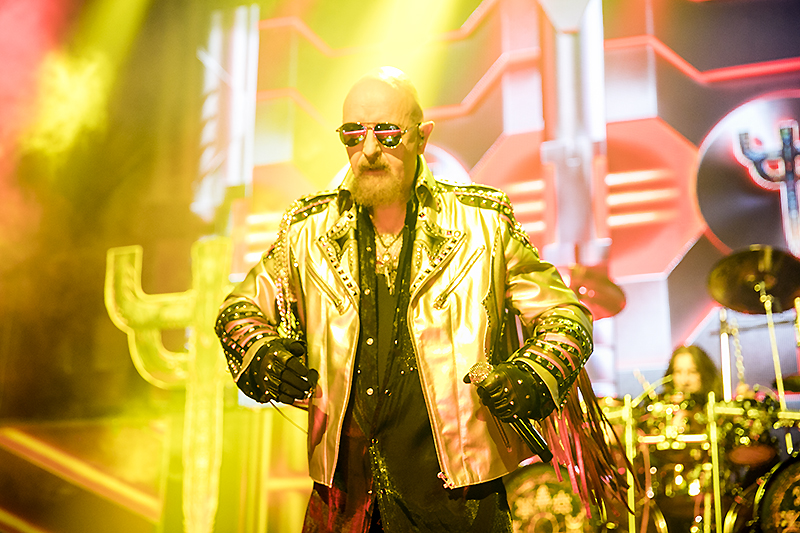 Aside from the Hall of Fame discography, the most recognizable element of Judas Priest is the now 66 year old Rob Halford and his stage swagger. Even after over forty years, he can still reach back and hit those blood curdling high screams that are his trademark, though understandably he now occasionally leans on a delay effect to sustain those highs. 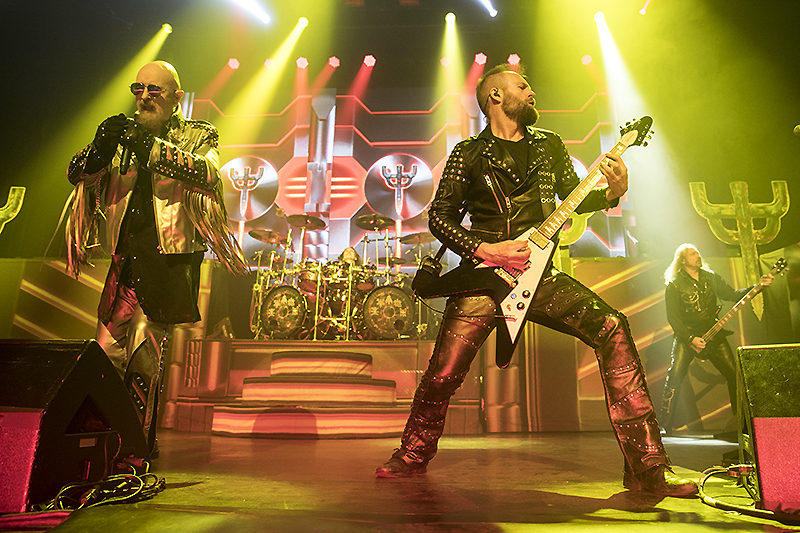 Following a full set of hot rockin’ through the decades highlighted by standouts ‘Electric Eye’ (Screaming For Vengeance – 1982) and ‘Hell Bent For Leather’ (Killing Machine – 1979), a brief break, and the coaxing of a loud chant of “Priest….Priest….Priest” from the boisterously drunken crowd, Halford and company appeared for an encore with a special guest. Guitarist Glenn Tipton, who recently ‘retired’ due to a diagnosis of Parkinson’s disease, came onstage to join guitarists Faulkner and Sneap (Tipton’s touring replacement) for a large dose of British Steel (1980). 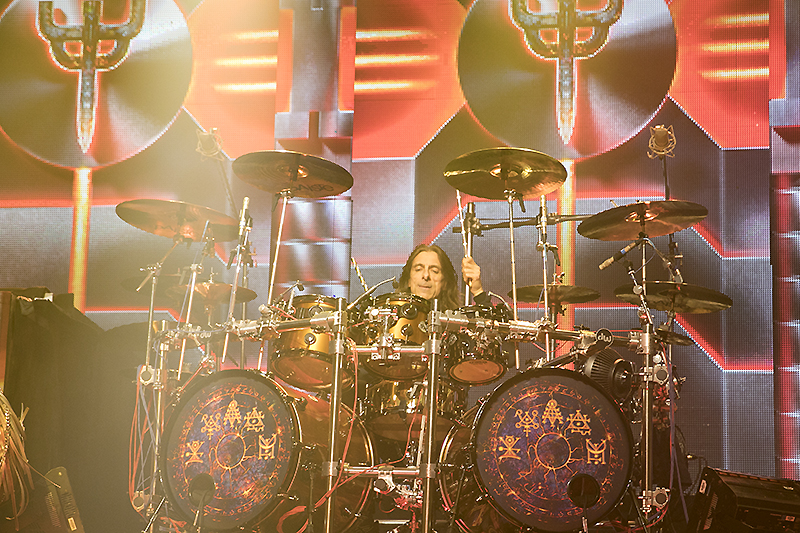 Tipton (who only performs at select shows) drew a long and well deserved ovation from the crowd, and then helped send them into a fever by performing on the closing trio of Judas Priest classics (‘Metal Gods,’ ‘Breaking the Law,’ and ‘Living After Midnight’).  Taking a final bow with his mates, Tipton, Halford, and Judas Priest showed that they are still at the head of the metal class with no signs of slowing down. 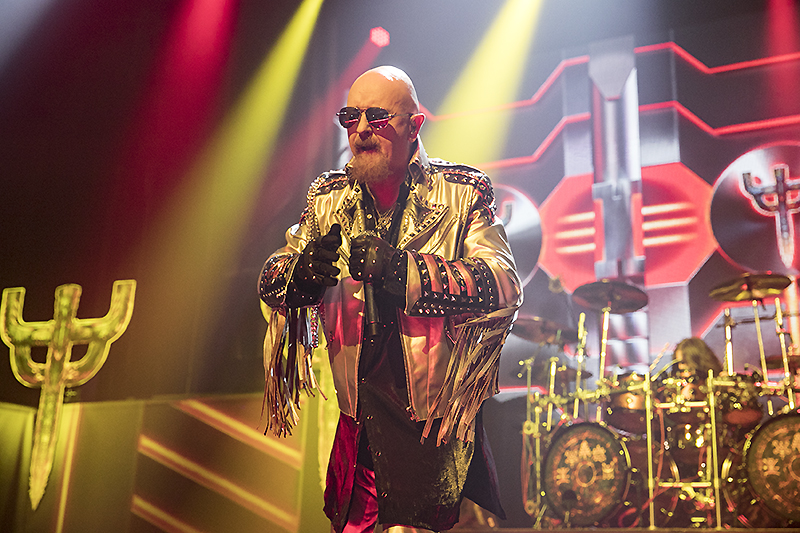 As a bonus for you Priest geeks out there, see if you can find the nine references to Priest songs they did not play which are interspersed in this review. This could have made up another hour of metal that would have rocked the house. No raw deal that they did not play them.there is just too much Priest to be contained in one show.

To make this even more of a true rock throwback for those who made it out to the Warfield, this show was a triple threat bill with Saxon and Black Star Riders. It was just like the good old days when it was common place to see three outstanding bands touring together.

Saxon stormed the stage ahead of the headliners with lead singer and founding member Biff Byford stalking around and head banging with fans to the hard rocking hits that made them NWOBM favorites in the early eighties, and an influence to scores of bands that came after such classic Saxon releases as Denim and Leather (1981) and Power & the Glory (1983).

In addition to their cult back catalog, Saxon also played well received cuts from their new 2018 release Thunderbolt. ‘Nosferatu (The Vampire’s Waltz)’ and ‘Sons of Odin’ were particularly well received, with the latter leading into a raucous close to the set with the band tearing up ‘Heavy Metal Thunder’ (2002). Byford and crew literally hopped off the stage as the audience roared and held up fists and horns.

Opening the night was Black Star Riders (BSR), who if you trace the lineage is basically the 2018 manifestation of Thin Lizzy. Formed by current Thin Lizzy guitarist Scott Gorham and singer Ricky Warwick (who has a strikingly similar vocal style to Phil Lynott), BSR played a tight six song set that wasted no time in drawing the crowd up the stage.

Blasting out the churning hard rock of ‘All Hell Breaks Loose,’ (2013) BSR then rolled out the Thin Lizzy masterpiece ‘Jailbreak.’ The early arrivers reveled in rock as the band then smoked ‘Before the War.’

For any fans of down and dirty, heavy, bluesy rock who have not yet keyed into Black Star Riders go and check them out. They have a very energetic if whiskey-soaked brand of rock that is authentic and refreshing amongst the cosmos of over-produced rock and metal that abounds these days.

If you’ve been living under a rock for the last forty years, you can find out about Judas Priest here.

Setlist: Thunderbolt | Power and the Glory | The Secret of Flight | Motorcycle Man | Nosferatu (The Vampires Waltz) | Dallas 1 PM | They Played Rock and Roll | Denim and Leather | Princess of the Night | Wheels of Steel | Sons of Odin | Heavy Metal Thunder

Setlist: All Hell Breaks Loose | Jailbreak (Thin Lizzy cover) | Heavy Fire | Before the War | When the Night Comes In | Bound for Glory