Given the current climate of ‘fake news’ and alt-right conservatism running rampant through many parts of the country, the headline of a coven of witches taking over a Chapel would cause alarm with religious zealots and conformists and send them into a fear mongering frenzy. 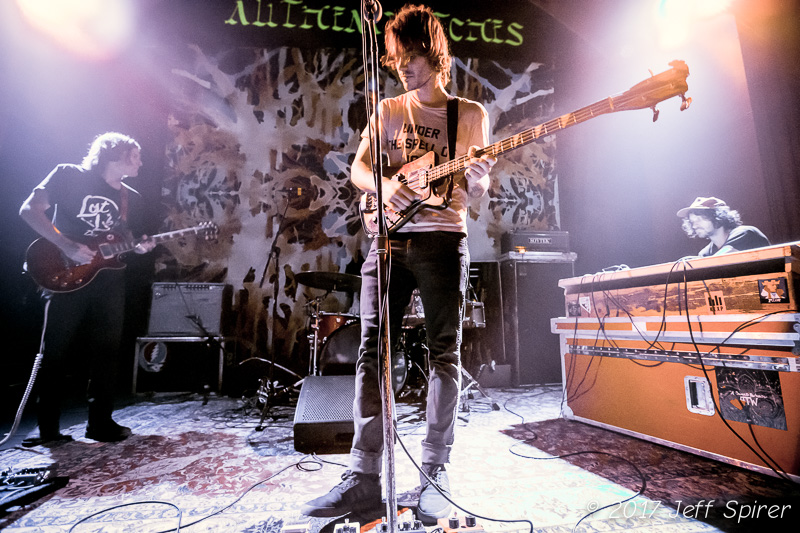 However here in San Francisco the thought of All Them Witches (ATW), the beguiling psychedelic-stoner-blues quartet from Nashville, casting musical spells at the Mission’s hidden live music gem The Chapel, is an occasion to be celebrated. The only cause for alarm would be if the bar ran out of Lagunitas IPA. 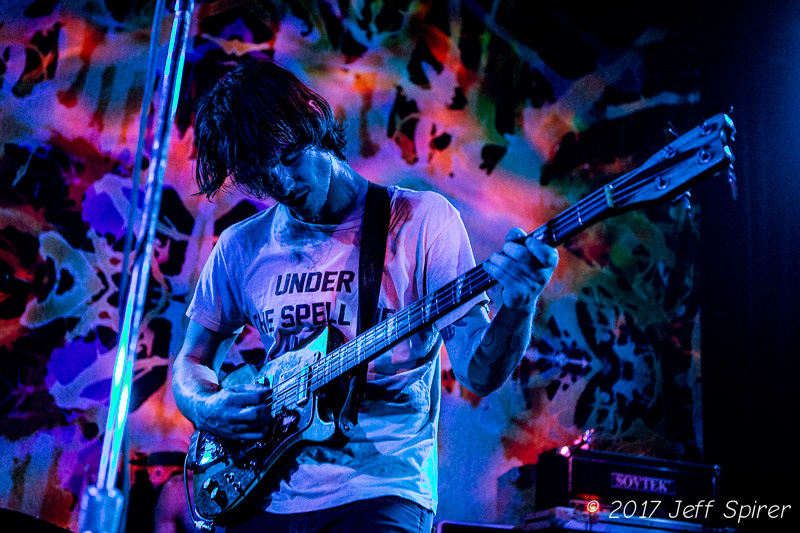 Though ATW (Charles Michael Parks Jr – vox / bass, Robby Staebler – drums, Ben McLeod – guitars, Allan Van Cleave – keys) is still a relatively young band (beginning in 2012), they have evolved quite a bit since their inception. Whereas they started out driving more in the wide lane of heavy blues laden stoner rock, they have greatly matured and have landed on a high ledge that is a landscape of soulful, hypnotic, psych-out, heavy rock candy. 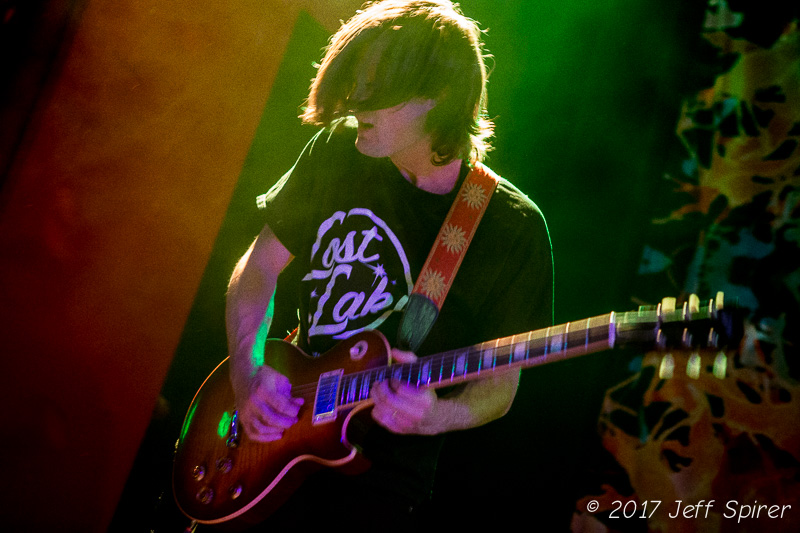 Intricately layering heavy drums, driving bass, and expansive guitars with spacey head-trip keys, ATW lifted off by immediately plunging the Chapel audience into the serene depths of ‘Am I Going Up’ off of their colorfully vibrant current album Sleeping Through The War (2017). The crowd swung like loose tree branches blowing in the wind, threatening to take off at a moment’s notice, guided by the plaintive and calling voice of Parks Jr……elevation achieved. 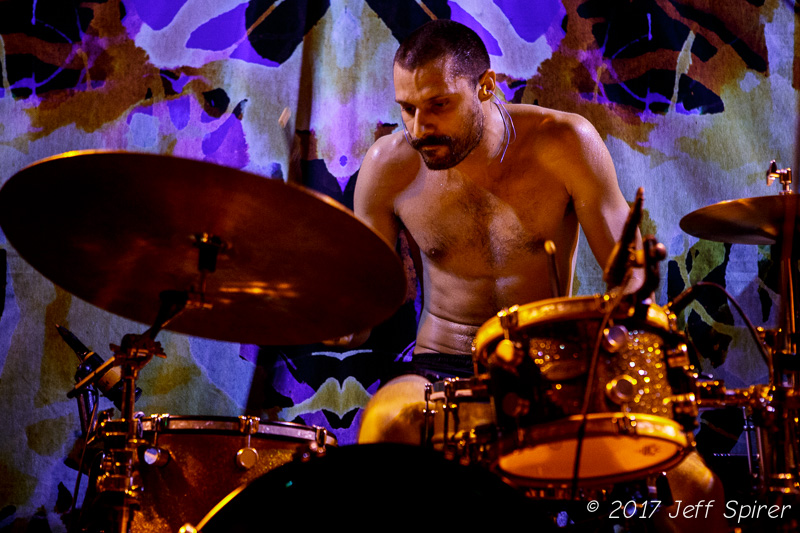 When ATW rolled out ‘The Death of Coyote Woman’ (Lightning At The Door – 2013), with its creeping intro, mesmerizing slide guitar, and Staebler’s tribal drum stomp, the crowd jumped right into the deep end behind them. By the time it was all done it would be said that the Witches had raised the temperature in The Chapel by about 10 degrees. 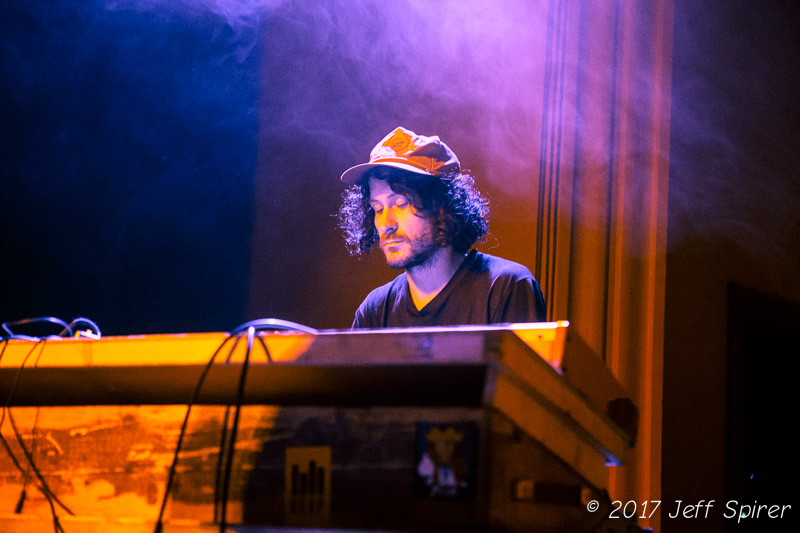 And they would not stop there. Flying directly into ‘3-5-7’ and ‘Alabaster’ from the new album, All Them Witches had their brew percolating at a steady and hypnotic rolling boil. ‘Alabaster’ in particular sounds like ATW hallucinated one night while listening to the Masters of Reality song ‘JB Witchdance’ on repeat, then wrote the song when they awoke from their lucid dream. 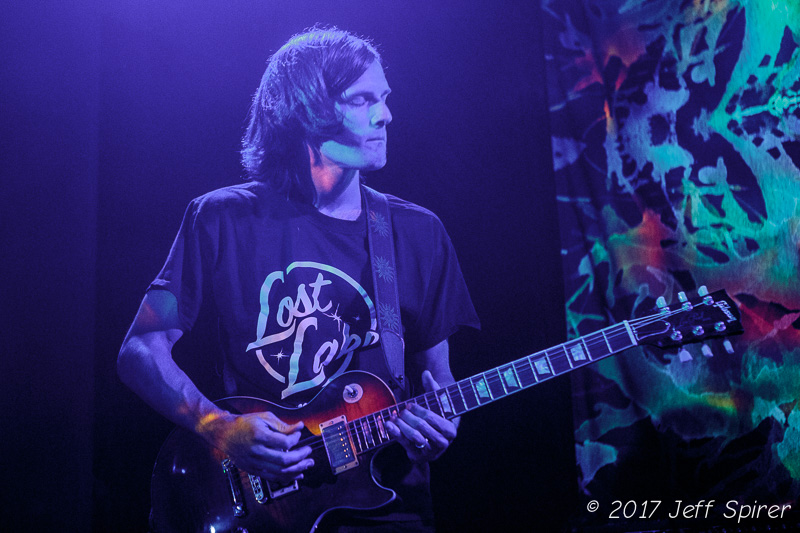 When delivering the goods from Sleeping Through The War it really becomes apparent that ATW, though still rooted in the garden of heady bluesy stoner rock, has grown into something more. They now tread the less travelled territory of bands such as Queens of The Stone Age and the aforementioned Masters of Reality. 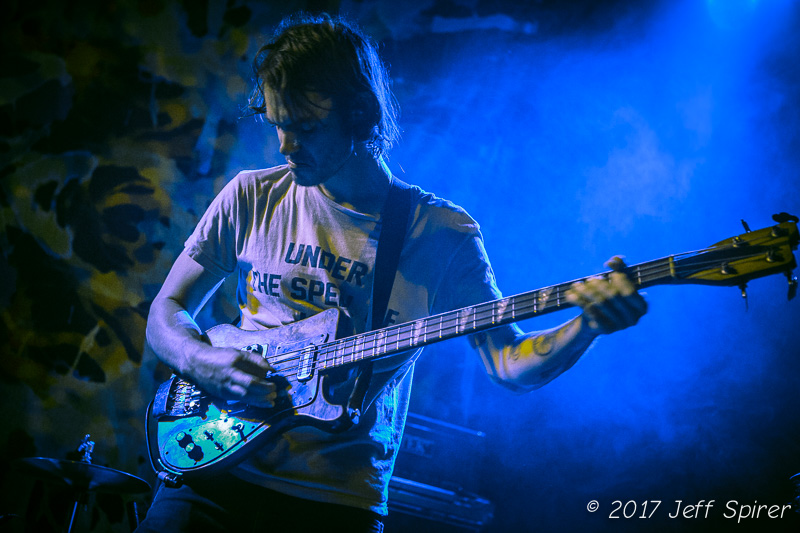 Actually if it weren’t a known fact that ATW was from Nashville, they could easily pass themselves off as being straight out of the Palm Desert scene. Though keeping true to their heavy side, ATW now pumps a spaciousness into of their sound that was not present in their earlier material, with their helium-filled balloon anchored to the ground by the incessant tom heavy drumming of Robby Staebler channeling his inner Ginger Baker. 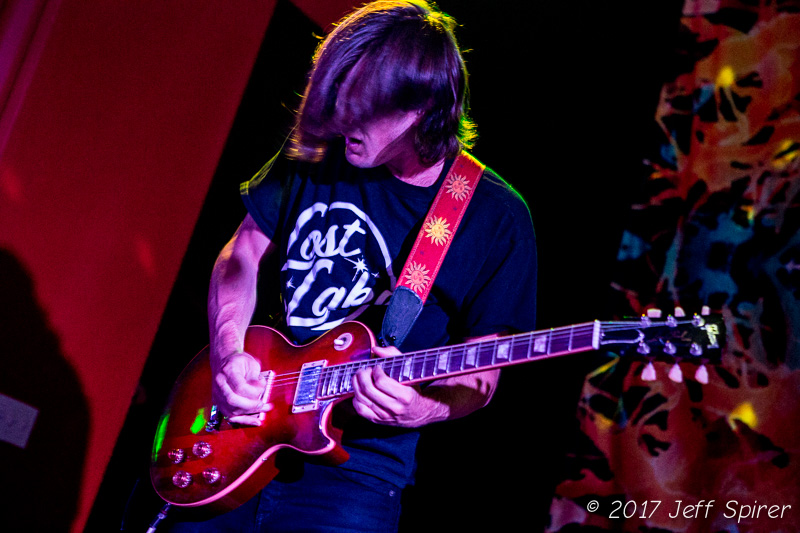 With the crowd still under their spell, ATW continued on conjuring their musical witchcraft. Melting jangly sharp-edged rock with cotton candy hooks sweetened by Parks Jr’s hypnotic voice, ‘Charles William,’ ‘When God Comes Back,’ and ‘Talisman’ had the ATW brethren dancing with eyes closed as the incantation persisted. 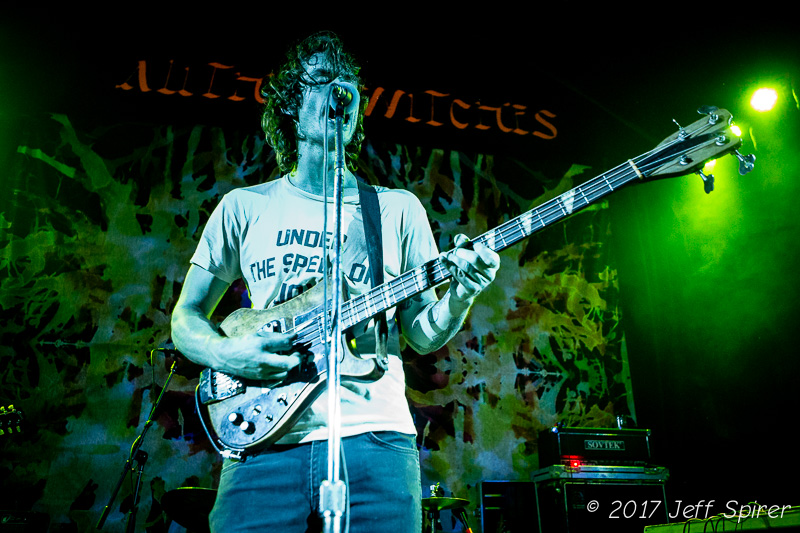 ATW is a unique animal, not easily fit in a labelled box as many in the music industry like to do. ATW instead is like a liquid that can adapt to the shape of whatever the container may be. Somehow deliberate yet improvisational, they twist together a sprinkle of spacey psychedelia, a dash of rootsy Americana, and heaps of bluesy rock stomp into a potion of heavy music that somehow defies gravity. 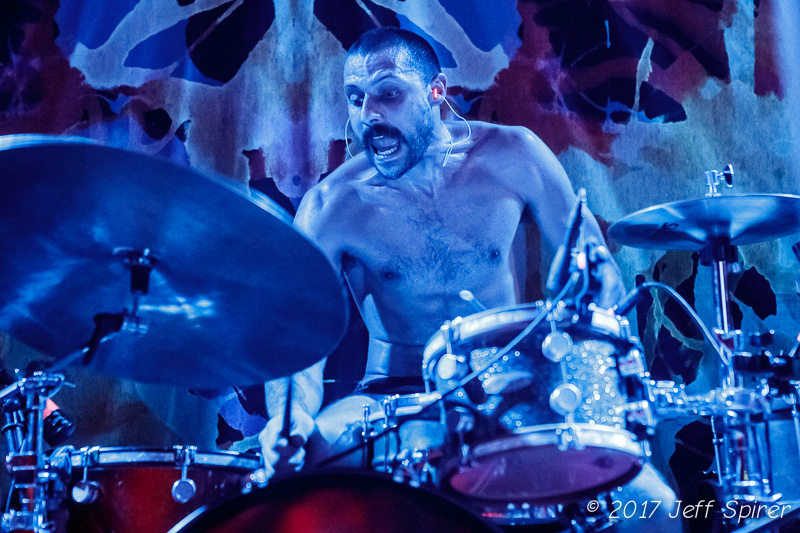 By the time they finished off their set with the magnificently floating ‘Bulls’ (Sleeping Through The War), and space drone of ‘Swallowed By The Sea’ (Lightning At The Door) All Them Witches left the audience in a dream state of rock euphoria. 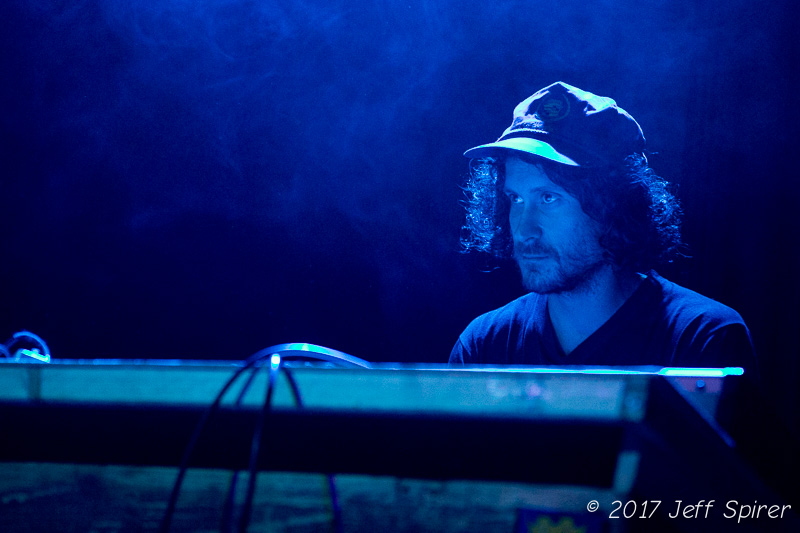 Disappearing off the stage in an ethereal haze, it is obvious that ATW is a band with many miles to go on their musical journey ….unbridled by the concept of the music industry or the perception of what others think their music should be. Wherever that journey may lead, the All Them Witches coven continues to grow and San Francisco will always welcome them to set for a spell.

Fellow Nashvillites Idle Bloom opened the evening by blasting out their own brand of indie rock. Demonstrating how diverse the Nashville music scene is, Idle Bloom – a four piece outfit led by singer-guitarist Olivia Scibelli – is sonically very different than ATW.

Their psych-pop rock sports catchy guitar hooks and lyrics that are reminiscent of 90s rockers The Breeders and Veruca Salt. They are very energetic onstage and in particular their song ‘Seeker’ got the crowd rocking to the guitar driven layers of sound cranked out of their amps.

Setlist: Am I Going Up? | The Death of Coyote Woman | 3-5-7 | Alabaster | Charles William | Dirt Preachers | When God Comes Back | Talisman | Internet | Blood and Sand / Milk and Endless Waters | Don’t Bring Me Coffee | Bulls | Swallowed by the Sea

For more information about All Them Witches, check out their website.