Lights turned down in the theatre as a symphony of horns and the voice of Edith Piaf filled the room. Edith sang,

No! I will have no regrets

For at last I have learned to be strong

No! I will have no regrets

For the grief doesn’t last

I’ve forgotten the past” 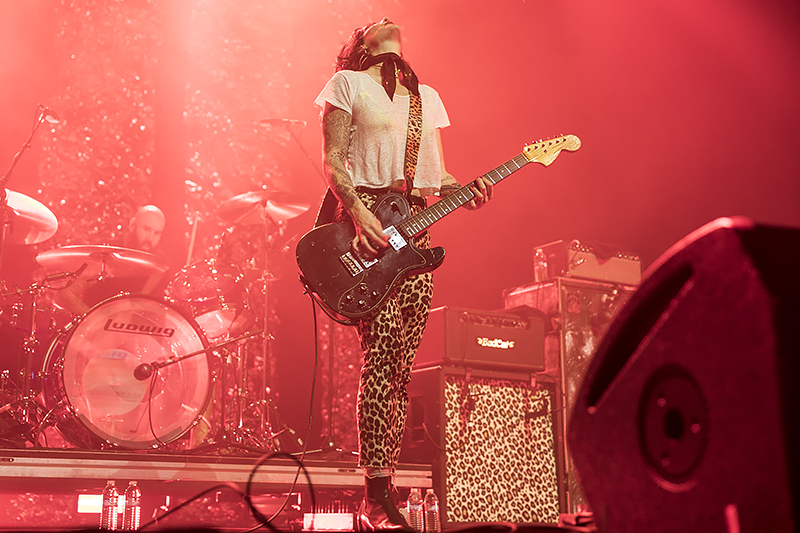 The Distillers made their way to the stage as the crowd went wild. The band wasted no time jumping into the set as guitars geared up to the riff of “Drain the Blood,” the opening song off their 2003 album Coral Fang. The room started jumping and the mosh pit was brewing seconds in. 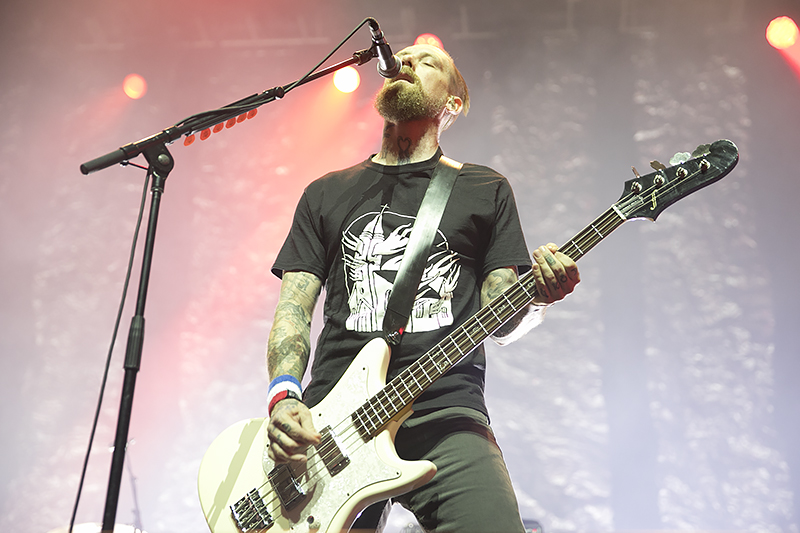 Clean, crisp punk rock with tight instrumentalization was delivered in a heartbeat that Friday night. Brody Dalle’s raspy, tough voice has lasted unchanged since they toured fifteen years ago, growing into time, their fashion has changed since Dalle’s spiky haired badass debut. Dalle wore leopard print pants, a white tank top and neck scarf with her hair in a manageable medium length bob that allowed her to shake her dark hair around with every head bang. 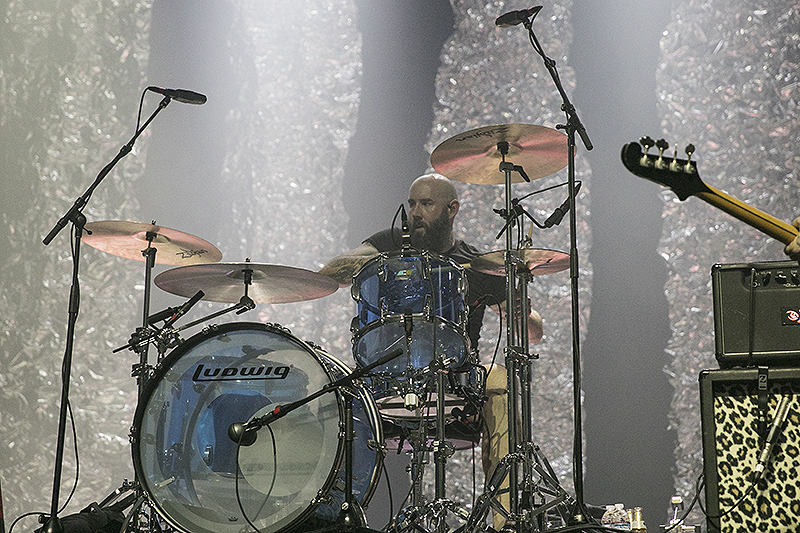 The band is an exceptional group of experienced rockers. Heavy riffs continued as the tight band, including Brody Dalle, Tony Bevilacqua, Andy Granelli, and Ryan Sinn, continued rolling through classic songs from their second studio album Sing Sing Death House like “I Am A Revenant” and “Seneca Falls.” The pot kept mixing as they filled their set with as much music as possible, aware of the tight curfew at the Fox Theatre. They included the high energy track “Die on a Rope” from Coral Fang before they threw it way back to their self-titled first album with “Oh Serena.” 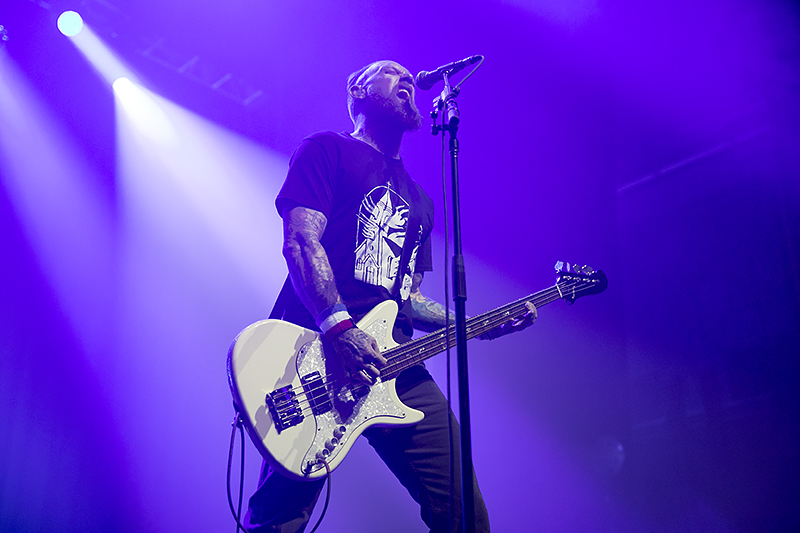 Continuously weaving in songs, the band took few breaks to chat. Though at one time, Dalle took a moment to dedicate “Beat Your Heart Out” to Oakland. The song’s hook is “Baby, you make my heart beat faster!” Showing us the band has a deep rooted love for the East Bay and its punk rock population. This segued into the rolling drumroll of another Coral Fang song, “Love is Paranoid.” 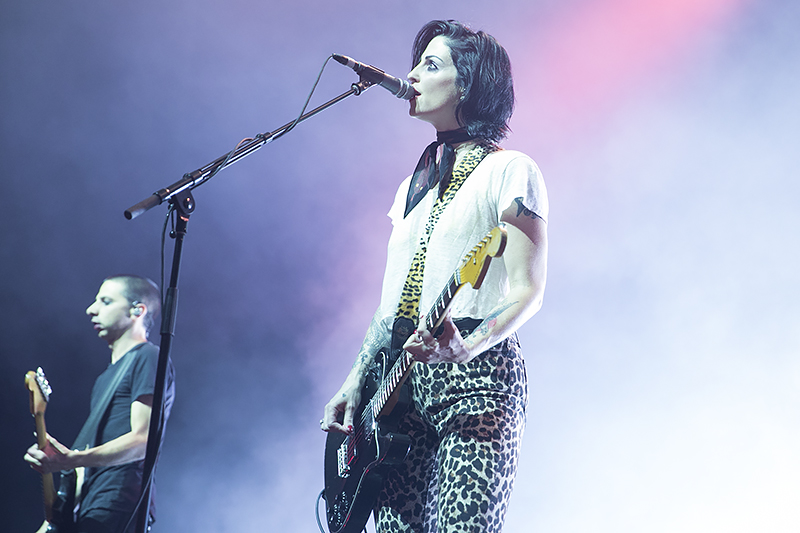 There were no dull moments as the energy was everlasting. The mosh pit did not stop so long as The Distillers were on stage. With quickness the band started the next song, Sing Sing Death House’s “I Understand,” a song that immediately takes listeners on a wild ride in the shoes of a misfit teenage Dalle. 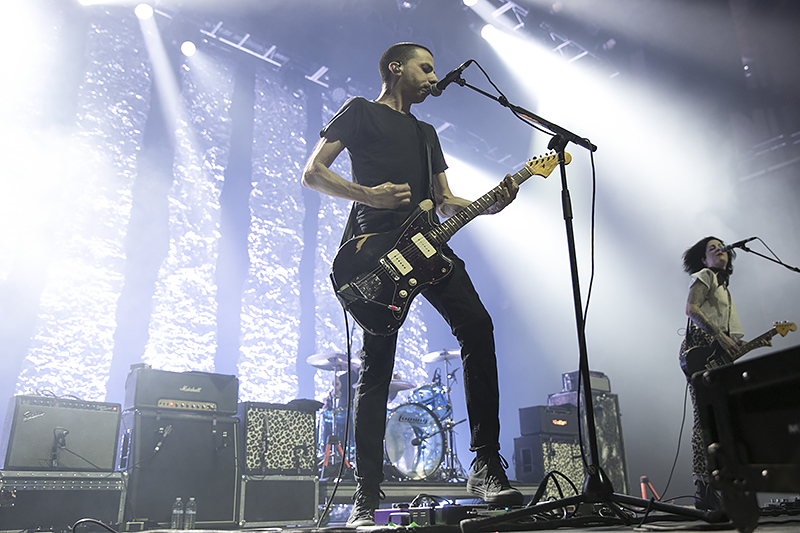 Three powerful songs from Coral Fang followed, “Dismantle Me”, “Hall of Mirrors” and “The Hunger.” Time slowed for the acoustic opening portion of “The Hunger” as Dalle serenaded her way into a yell.

“Holy eyes, I never knew I’d beg down at your feet

Hold on tight, I never knew I’d know much more than this

Open sky, the wave of pain, the scent of you is bliss

Hungry eyes, they stare at me. I know, I know.

The audience sang along to it all, and eventually Dalle synchronized a chorus of the crowd singing “yeahs” to accentuate the lyrics of “The Hunger.”

Next song to hit the stage was the Distillers’ newest “Man vs. Magnet,” which has an alternative sound with less rasp and more harmonizing, similar to Dalle’s solo projects, followed by a short B-side called “Solvent.” Conclusively, they tied the show together with additional classic songs from Sing Sing Death House and Coral Fang. 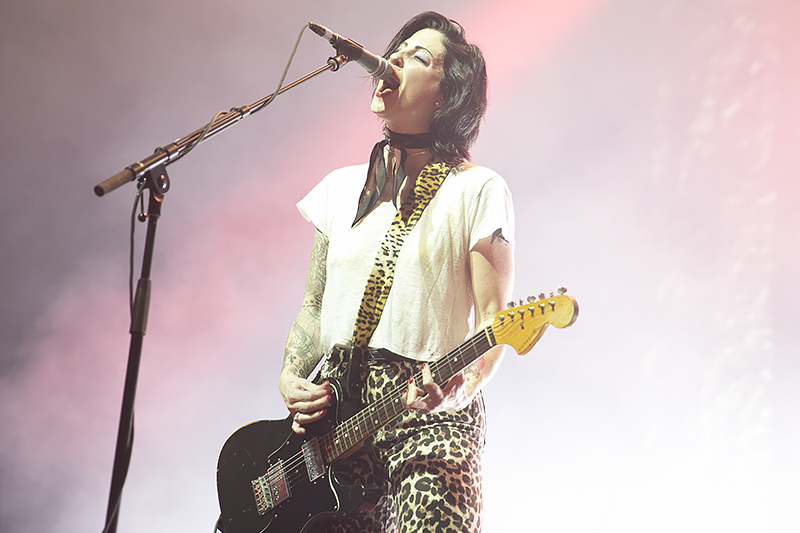 Dalle’s vocals are heart wrenching in “The Gallow is God,” while guitars give sense of the body breaking. “For Tonight You’re Only Here to Know”, is an intimate song that sets lover’s embrace and distance all at once over shredding guitars. The strings’ sound leaks the sensation of tingles. 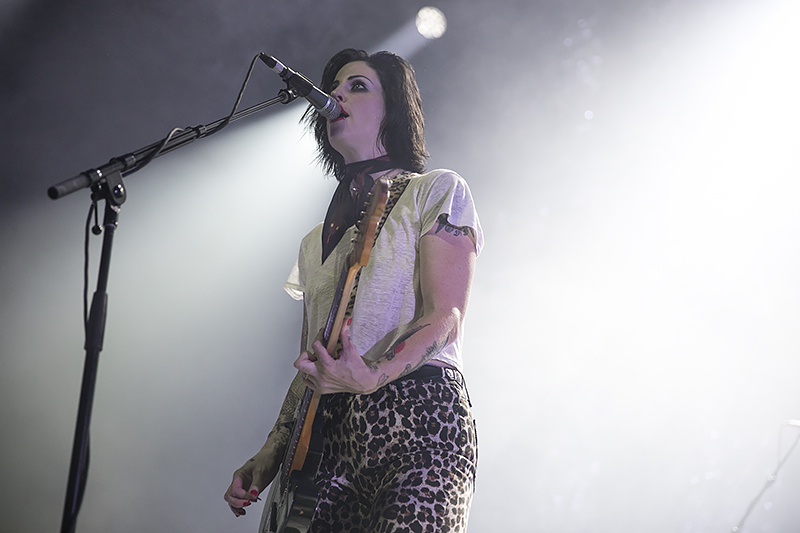 At this point in the show if people weren’t crying, they were probably still moshing. Maybe they were crying and moshing at the same time as the familiar sound of one of The Distillers breakthrough tracks “City of Angels” roared, firing up moshers to their boiling point. Listeners sang along and synchronized to their shouted words, “They say / This is the city / The city of angels / All I see is dead wings.” The energy swirled through “Sick of It All,” a punk rock anthem about psychologically damaged teenage angst. 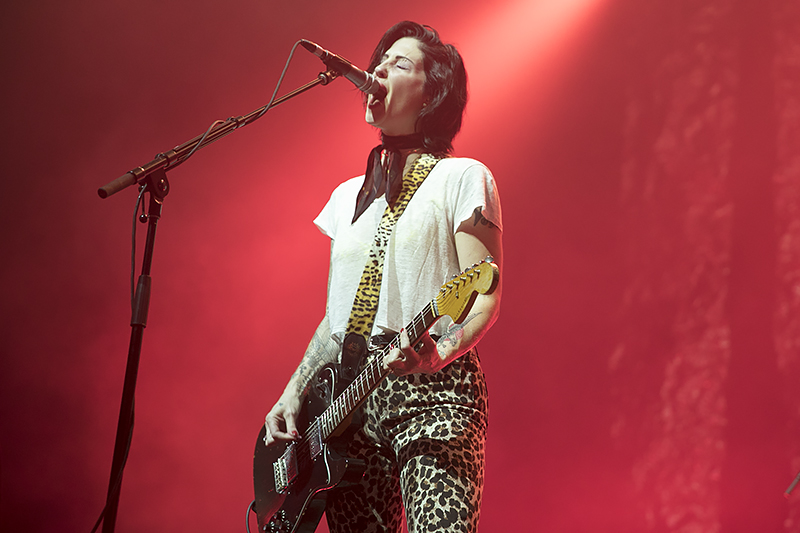 Dalle squeezes in a few more spoken words to the audience “We got a lot of history here. Good and bad. That’s okay, that’s life. You just pick up and move on. That’s how we grow. This song is about just that…”

Finally, the band shoots us with adrenaline again for another single from Sing Sing Death House, “The Young Crazed and Peeling.” A song that starts with a question… “Are you ready to be liberated?” It continues with a little about where Dalle was raised and the situations that made her grow. Some might have imagined her walking down the streets of LA and East Bay with that legendary punk rock spiked jet-black hair as she screamed “I’ve got freedom and my youth!”

The Distillers exited the stage waving at the audience and running. Everyone wanted more and made noise. They quickly returned to the stage to close out the set with a single song, the high energy track “Coral Fang.” Classic “Oooh ahh ohh’s” filled the air to recklessly soothe the crowd into good night.

Before The Distillers…what appeared to be a trio was bombed by the towering presence of rock’n’roll crazed lead singer Arrow de Wilde as she stumbled on stage pigeon-toed, rumbling her body to the riffs. Starcrawler are a quartet from LA and their tractor beam magnetized the crowd – surprisingly capturing every early bird’s attention. To think, someone outside the venue said “who cares about an opener?” Starcrawler are so action-packed people were gasping in awe and had people screaming “I love you!” before the headliner.

De Wilde revives the shock value of Black Sabbath, while wearing a hospital robe on stage. She is unfiltered rocking through the set choking herself with the microphone wire, falling to the floor, coughing up blood, rubbing her crotch and making expressively crazed movements. While De Wilde assaults the crowd and her band, the band maintain their composure, stoic and focused on playing their psychedelic fused compositions. Imagine mixing glam rock style and with menacing body language– 70s sounds so raw they bleed dark and sparkly. Starcrawler’s music jolts the audience and band, keeping them active while carrying the weight of Los Angeles throughout the intergalactic journey. De Wilde is quoted on their Facebook page talking about their bands origin; “There’s really no place like L.A.,” says Arrow. “It’s fascinating. It’s one of the darkest places you can imagine, and at the same time, it’s sparkly and glamorous and enticing. I think that’s what Starcrawler is all about capturing.”

Setlist: Drain the Blood | I Am a Revenant | Seneca Falls | Die on a Rope | Oh Serena | Beat Your Heart Out | Love Is Paranoid | I Understand | Dismantle Me | Hall of Mirrors | The Hunger | Man vs. Magnet | Solvent | The Gallow Is God | For Tonight You’re Only Here to Know | City of Angels | Sick of It All | The Young Crazed Peeling | | Coral Fang

Find out more about The Distillers on their Facebook page.